Residents of a village near Worksop, where INEOS wants to drill a shale gas well, are planning a protest next week against the company’s proposals and a legal action it has taken against demonstrators.

The halloween-themed event at Woodsetts in Rotherham Borough is a rally against shale gas exploration and the interim injunction granted to INEOS to prevent protests interrupting its operations.

Opponents argue that the injunction breaches articles 10 and 11 of the Human Rights Act.

One of two challengers to the injunction, Joe Corre, will be at the event at Woodsetts recreation ground.

Mr Corre, son of fashion designer Vivienne Westwood, is expected to talk about the injunction and his opposition to fracking.

Joe Corre at the High Court for a hearing on the INEOS injunction on 12 September. Photo: DrillOrDrop

“I’m proud to be going to meet and support the people of Woodsetts as they stand up against this enormous bully.”

He criticised the company for its portrayal of opponents of fracking:

“INEOS has been trying to paint a picture that its opponents are all dangerous, irrational fanatics, trying to ‘game’ the system.

“This is far from the truth. Ineos have attempted to ‘game’ the system through the court case. And a quick glance at the INEOS health, safety and environmental record shows beyond doubt who is gaming the system here”.

“It is our duty to do all we can to ensure the safety of everyone on and around our sites including the protesters themselves. We are also clear that our people and suppliers have the right to come to work free from harassment and intimidation.”

The protest, organised by Woodsetts Against Fracking, starts at 6pm on Wednesday 25 October. Details

Mr Corre and another campaigner, Joe Boyd, are to challenge the injunction at a hearing provisionally scheduled for 30 and 31 October 2017 at the High Court in London.

INEOS has confirmed it is preparing to submit the planning application to drill at Woodsetts.

The company’s planning consultant, Turley, posted an official notice at the site off Dinnington Lane in the village last week.

The proposals, which will go to Rotherham Borough Council, include:

The plans are very similar to those planned by INEOS for a site at Common Road, Harthill, also in Rotherham Borough. But the Woodsetts application also includes a pressure transient test to measure flow rates and pressures of gas in the shale rock.

The official notice (see above) is required under Article 13 of the Town and Country Planning (Development Management Procedure) Order 2015. This obliges people proposing to apply for planning permission for mineral working to inform formally the owners or tenants of land to which the application relates.

Under the order, the notice must be displayed for not less than seven days in the period of 21 days immediately before the application is made to the local planning authority.

It does not replace the public consultation period when the application has been submitted and published.

When submitted, the planning application must be validated by planners at Rotherham Borough Council. This means the company has completed the application form, supplied the required information and paid the correct fee.

The application will then be posted on the council’s planning website and open for public comments. The consultation period usually lasts at least three weeks but can be six weeks or more. DrillOrDrop will report on the contents on the application when it becomes public.

Ban on fracking on council land

Rotherham Borough has voted to ban fracking and seismic testing on council-owned land.

At a meeting last week (18 October 2017), members approved a motion proposed by councillors for areas where INEOS is applying for permission to explore for shale gas. 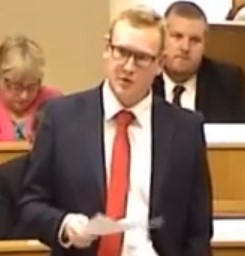 Dominic Beck (Labour) represents Harthill, the location for the first exploratory site in the borough, which is likely to be decided next month.

He told a meeting of the council, there were too many risks in fracking.

“It’s all about the mitigation of risk to the external environment, rather than the eradication of risk.”

He said shale gas was “not proven to create vast amounts of jobs to benefit local job markets, as coal mining once did here in Rotherham.” And he said:

“We shouldn’t still be supporting industries that proliferates the extraction and use of fossil fuels. Instead we should be encouraging the growth and investment in renewable energy sources.

“The concerns and well-being of local communities and the residents who live in them should without compromise always be a sacrosanct priority for us.

“The government is supporting an industry, an industrial process and an approach that I believe falls short of this.”

Cllr Katherine Wilson (Labour) represents Woodsetts, where INEOS is planning to submit an application next week to drill and pressure test a vertical well. The company gave notice of the application last

Cllr Wilson said fracking was one of the most controversial issues in the UK.

“It is an issue which has pushed communities, such as Kirby Misperton in North Yorkshire, to breaking point and challenged the capacities of our police.

“I know how residents are feeling right now: worried that fracking in our local community could have an adverse effect on the place we call home.”

She said they were worried that the rural atmosphere of the Rother Valley would be lost, house prices would fall, roads and water would be affect and what would happen to the land afterwards.

“I hope that with this motion, Rotherham council can send a clear message to concerned residents across the borough that we are standing shoulder to shoulder with them and that we are on the same page.”

“After attending meetings where frackng companies could not adequately answer my questions or residents’ concerns I am even more elated to be seconding this motion today in solidarity with the people I was elected to represent and to continue fighting against something I wholeheartedly oppose.”

The motion said the council:

“Stand up and fight”

“I will oppose it in actions because if you don’t agree with something you stand up and fight against it.”

He said he was concerned about the impact of fracking on old mine workings:

“We don’t know what damage it will do when they start fracking in these areas.” 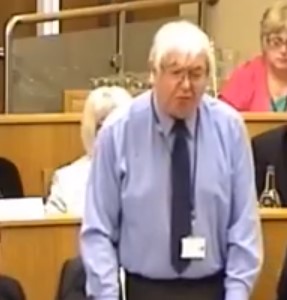 “I have a really cynical disregard for big business. When they tell me something is safe I don’t know whether we can believe them.”

“For me there are too many unknowns with fracking, too many things which we are unsure about, too many potential risks for health and safety. Therefore, I’m not personally prepared to take the risk of that potential harm to people’s lives.

“Maybe they’re all groundless but we don’t know for sure.”

Cllr Sue Ellis, Labour, argued for renewable energy as an alternative to fracking:

“I believe our efforts should be put into renewables and the development of storage is essential but not impossible.”

“We should be reducing our dependency on fossil fuels to meet emission reducing targets. The only way to stop climate change is to stop burning fossil fuels not to dig up more.

Cllr Allen Cowls, UKIP, was one of just three members who opposed the motion. He said:

“Energy policy must be reliable, it must be secure and at a price that people can afford.

“Nothing that I have heard today convinces me that you have thought through these fundamental criteria or that you can sustain energy supply meeting these criteria over the long term.”

Members of the council’s planning board abstained in the vote. A Lib Dem amendment was defeated.