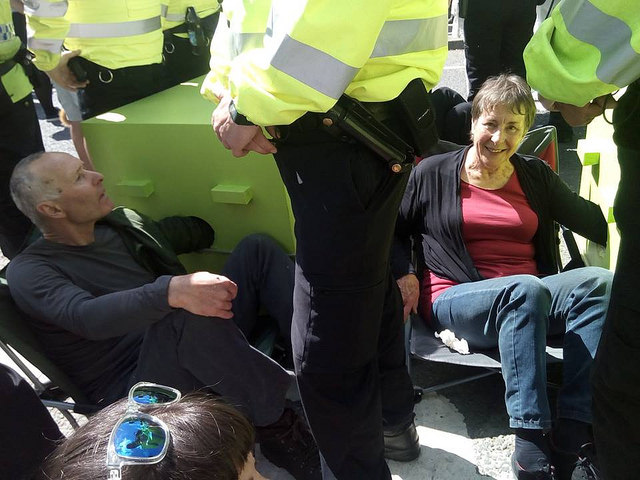 73-year old Gillian Kelly, her son, Sebastian, and 20-year-old granddaughter, Megan, were among seven people who stood trial this week following a “lock-on” protest outside the Preston New Road fracking site near Blackpool.

Under the banner Families Against Fracking, six of the group locked their arms into reinforced tubes in three painted boxes. The seventh member of the group, drove a car which delivered the boxes. They said their action was to raise awareness of what they said were the dangers of fracking to water, land, health and the climate.

The protest was part of a month of protest called Rolling Resistance, in July 2017, coordinated by the anti-fracking group, Reclaim the Power.

The three members of the Kelly family, along with Paul Martyn, Molly Hopkinshaw, Beatrice Patrick and Toby Fairlove all denied obstructing the highway.

But she said the case was not about the rights or wrongs of fracking and their actions had been unreasonable.

All seven were given a six-month conditional discharge and ordered to pay a £20 victim surcharge. All but Megan Kelly, a student, were ordered to pay £250 costs.

Gillian Kelly, a psychotherapist, told the court the group thought it would send a powerful message if three generations took part in the protest. She said the group had planned the protest and the night before they had practiced the lock-on.

The court heard that the group had intended to lock-on in the entrance to Cuadrilla’s site, to avoid blocking the A583.

But when they arrived at the site at about 10.15am on 12 July 2017, the police had set up a contraflow. The group decided instead to use the central reservation of the road.

The campaigners said there was enough space for vehicles to pass and there had been protests in this part of the road before. They said the police decision to close the road was unnecessary. Police officers told the court the road had to be closed to give a specialist team enough space to unlock the campaigners. They were released in mid afternoon.

Toby Fairlove, who drove the car, said he hadn’t intended to block the carriageway because he believed this would antagonise local people. He said police officers took the ignition key from the car seconds after he had stopped in the road.

“Behaviour was not reasonable”

“It was not your initial intention to cause an obstruction.

“Had ‘Plan A’ gone to plan who knows what would have happened. But that was not the case on 12 July.”

The protest was significant enough to have an impact on other road users, she said. She rejected the campaigners’ argument that the road closure was not necessary. The refusal of the six to unlock themselves led to the road closure, she said.

“Such behaviour is not reasonable”

DJ Goodwin referred to the ruling by the High Court judge, Mr Justice Morgan, in the INEOS injunction case. Although not binding on the criminal courts, he concluded that lying in the road, particularly when locked-on, would not be regarded as a reasonable use of the highway.

Gillian Kelly, born and raised in the area around Cuadrilla’s site, said:

“Today’s ruling went against us but we feel proud of our actions and on the right side of history. We hope we may have inspired others to take a stand against fracking in whichever way they can.”

“I felt apprehensive taking the action we did – but a little anxiety is nothing compared to the disastrous climate change that fracking and other fossil fuel use threatens.”