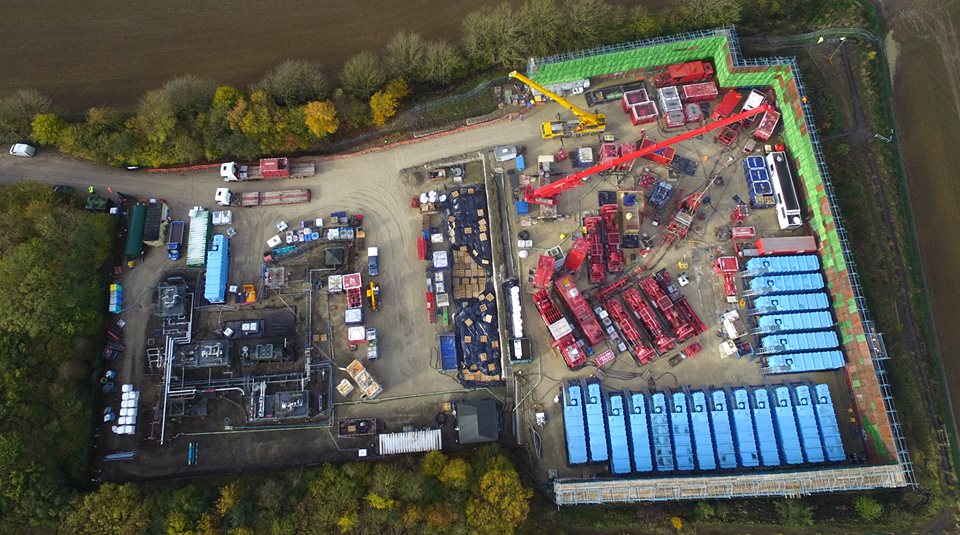 When Third Energy announced plans to frack one of its wells at Kirby Misperton, people in the North Yorkshire village decided to monitor the effects for themselves. They began by collecting data to establish a baseline against which impacts could be compared. In this guest post, Mike Potter, a member of the Kirby Misperton Monitoring Group, explains why, how they did it and what they found out.

Living near a planned fracking site prompted me to look into high volume high pressure hydraulic fracturing about six years ago. But when reasonable questions and suggestions were met with silence, half-truths and weasel words, I became highly suspicious.

A key failing in the early days of fracking in other countries was that baseline data was rarely collected.

How could harm, detrimental effects, or even benefits be recognised when there was no evidence of how things have changed? How can effective regulation be put in place without robust understanding of harmful effects? Fracking is a completely untested process in this country, apart from the Cuadrilla example at Preese Hall in 2011, so no evidence base exists for the UK.

I asked for baseline assessments of health, air and water quality before any fracking took place. I said there should be environmental impact studies using evidence from existing fracking operations. This should be followed by a sensible period of ongoing monitoring of any potential impacts if the industry were to expand commercially. I suggested that data collection and analysis should be strictly independent wherever possible and with an extremely robust provenance.

I received neither response nor reassurance.

After about nine months, I decided there was no justification to trust the word of either industry or government until I could see some commitment to my requests.

Eventually the government agreed to fund independent monitoring led by the British Geological Survey (BGS) in and around the Kirby Misperton site and at Preston New Road, where Cuadrilla was planning to frack. This work, carried out with four universities and Public Health England, was additional to monitoring required by regulators.

While this monitoring was welcome, it did not cover all the impacts that fracking may have on the local community. Noise and traffic levels were not included, and initially, air quality was measured only at the KM8 well-pad itself.

So a group of concerned residents came together and formed the Kirby Misperton Monitoring Group (KMMG) to address some of these issues.

We wanted to be sure that appropriate monitoring was in place and accurate baselines were recorded before any fracking-related disruption happened.

We also wanted to establish if there were any gaps in the monitoring by the British Geological Survey, Third Energy and the regulators.

Making our own baseline measurements would give us a solid understanding of the measurement process and the conditions in the area before fracking happened. This would make us better placed to talk about the issues and to hold the operator and/or the regulator to account if we needed to.

Having our own data would mean we would be prepared to challenge any future planning applications if we wanted to.

In deciding what we would monitor, the most important considerations to us were cost, trustworthiness and reliability of results.

Equipment and methods would have to conform to accepted and proven protocols for results to carry as much weight as possible. So, for example, chemical analysis of water samples had to be conducted by an accredited laboratory and traffic surveys were conducted according to industry guidelines.

This wasn’t about being pro or anti fracking.

It was about collecting unbiased data that would allow us to recognise harmful effects on local communities or ecosystems if or when they occurred.

Some people will ask ‘why would we trust your results?’ The use of industry standard protocols means we can robustly defend our findings. We can also compare them to those of BGS and Third Energy and they should closely match. If not, there are serious questions to be answered of ‘whose are wrong, and why?’.

The group initially identified 13 areas where monitoring would be useful. But we prioritised four areas: noise, air, water and traffic.

We believed this was where the immediate possible impact on the community was likely to be greatest and we could make good quality measurements.

Water quality: We had access to five boreholes and wells around Kirby Misperton

Noise: We monitored 24/7 about 800m from the site and within the village

Other: We also monitored complaints to police, arrests and incidents.

Funding for KMMG has come from a combination of our own pockets, other local people who agree with our aims and objectives, and donations from a number of businesses with strong green credentials.

Unsurprisingly, we would welcome further unconditional donations. As you would expect, the most valuable contribution has been the considerable time, commitment and knowledge of our members.

KMMG has brought together people with a diverse range of expertise, and we have sought further advice and learnt a great deal along the way.

For efficiency, small teams work on each of aspect of the monitoring according to their relevant skills and interests, and the wider group meets regularly to share and discuss progress.  For example, traffic surveys require plenty of volunteers (we had a team of 30) with the concentration and perseverance to accurately count vehicles in miserable weather for an hour or two, while other aspects of our monitoring have required fewer people, but more specialist knowledge.

We identified key traffic locations and recorded vehicle types and numbers, as well as traffic incidents.

We focussed on methods that were relatively low cost, that could give us accurate, quality-controlled results to industry standards and that we could conduct and interpret. Our data was complementary to the BGS air quality monitoring, which was just at the site, while our measurements were around the village.

We used diffusion tubes, which were industry standard and analysed at an accredited lab.

We identified where Third Energy’s consultants planned to monitor ground and surface water and we looked for gaps in this monitoring.

We used a suite of tests to measure dissolved gases, chemicals and typical fracking-related compounds. This was considerably broader than Third Energy’s monitoring. The test company supplied transport and bottles for testing, guidance and information sheets to ensure we collected clean specimens.

We acquired industry-standard equipment, including a monitor, monitor calibration device and a weather station.

We sited the noise monitor and weather station 810m from the well site in a resident’s garden. It was 10m away from Third Energy’s equipment. The weather data is essential to interpret noise measurements. 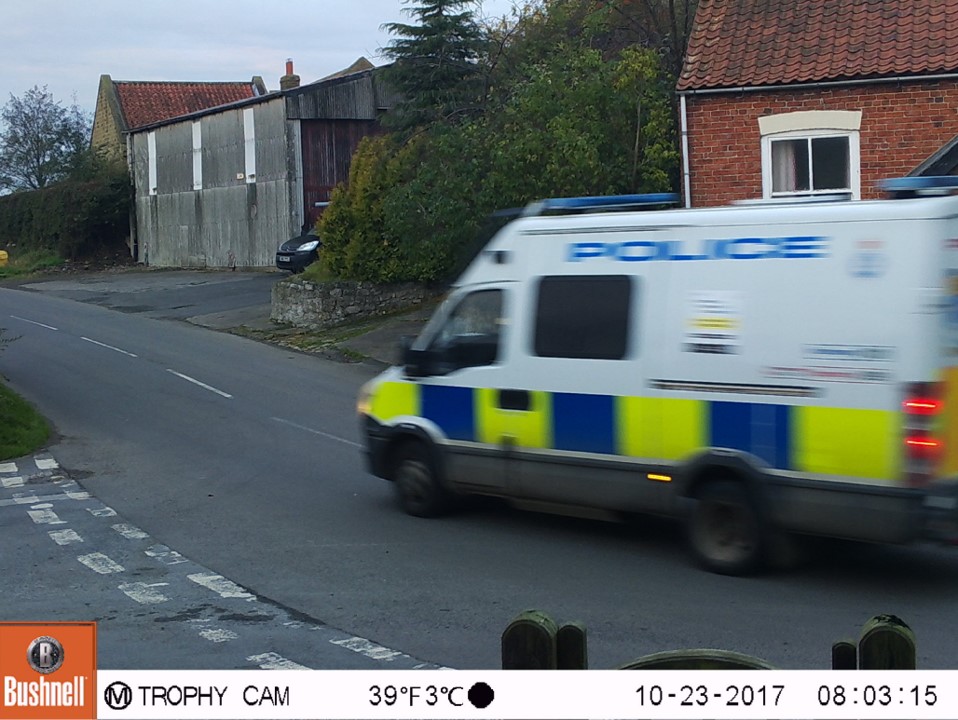 We now have clear evidence that Kirby Misperton Village residents were severely disrupted by the traffic associated with the preparations to frack the well site at KM8. There is robust data we can use to address any future planning applications.

There was a 30% increase in traffic movements at the start of site preparation at KM8. 25% of the increase was light goods vehicles and vans. Police vehicles accounted for 10-15% of daily movements. These comprised 100 movements through the village each day that had not been accounted for in the Traffic Management Plan (TMP), approved by North Yorkshire County Council.

We discovered that the TMP was breached virtually every day and no-one accepted responsibility for the breaches. The county council blamed the Police. The police blamed Third Energy. Ryedale District Council appeared to do nothing.

We know that heavy goods vehicles (HGVs) delivering to the KM8 site were too big to navigate roads in the villages around Kirby Misperton. We now know what traffic comes through Kirby Misperton every day. We also know what the limits are on the amount and type of traffic the village can accommodate in future.

As well as our own monitoring, we followed the more detailed BGS air quality data (made available online) on particulates and a range of gases. This helped us to understand the impacts of site activities on air quality.

Water quality: No evidence of contamination

We did not find evidence suggesting any oil and gas contamination prior to fracking taking place.

We found that many farms were reluctant to allow us to test their boreholes. We also discovered that there are considerably more boreholes than we originally thought. Potential groundwater contamination from fracking is a greater threat to farmers than they may realise.

We can now give the planning authorities a realistic baseline for local noise levels. We also have actual data on the noise levels, duration and quality that communities may experience at different stages of fracking development.

This information could allow people to identify breaches of planning conditions and alert the authorities.

What we also learned?

We have a better understanding of what needs to be monitored, how this can be done and how to identify when breaches occur.

We have improved our knowledge of monitoring procedures, both generally and at the KM8 site specifically. This has helped us to assess what we have been told by the regulators and Third Energy, and to interpret the data from BGS.

We highlighted that onCline data streamed from the BGS seismic equipment was not scaled correctly, meaning seismic events were not being shown. Additionally, one of the six units was not streaming in real time due to the lack of 3G connection. We raised these issues with BGS, which corrected them, ensuring that seismic data for KM8 was publicly available

We successfully recorded the data we wanted to and we now know where the gaps are. We won’t be blindsided in the future on monitoring issues.

We could have better communicated the results to the village on what we achieved. We need to improve our ability to consolidate and record incidents of all types.

We would like to carry out baseline methane monitoring of the area before drilling and fracking. This will conclusively show any fugitive emissions if or when fracking takes places but it is a very expensive procedure.

We learned that having technically-savvy people on the team was essential. We needed people who could analyse data, install and set up equipment and communicate with the group. We are very grateful for the time and effort given up by the circa 38 people who made up the group.

And finally, we also learned that we needed to plan for separate, secure and consolidated data storage.

The efforts of KMMG members demonstrated how seriously some in the local community are concerned by the prospect of fracking in Ryedale and far beyond.

When significant numbers of rational, intelligent local people recognise the need to commit so much of their time, effort and tenacity over a long and indefinite period of time to such an end, you really have to ask the question why?

For any group who would like more information, please contact frackfreeryedale@gmail.com with your name, address, the group you represent, your e mail address and telephone number.