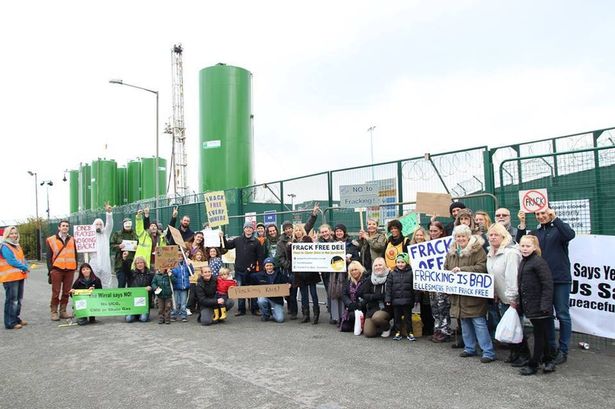 The UK’s first public inquiry on the impact of an onshore gas site on climate change gets underway this morning.

The hearing on proposals by IGas to test for gas in Ellesmere Port is also the first in the UK where the well site is in a town or city.

A government-appointed inspector will hear evidence from Cheshire West and Chester Council, which refused planning permission in January 2018 because the scheme failed to mitigate the effect on climate change.

The inquiry will also hear evidence from the campaign group, Frack Free Ellesmere Port and Upton, which is calling nine expert witnesses. Representatives of IGas will also give evidence.

The hearing, at Chester Town Hall, is expected to last six or seven days.

The Ellesmere Port well is one of several drilled in north west England, where IGas companies said they were exploring for coalbed methane but actually drilled down into the shale layers.

IGas will say it plans to re-enter the Ellesmere Port well to determine whether commercial hydrocarbon production can be established from the Pentre Chert rock formation. This involves a Drill Stem Test, expected to last 14 days, and a 60-day extended well test.

Acid diluted to 15% will be pumped into the well to “re-establish natural flow in the formation”, IGas will say. During both tests, gas from the well will be burned in a flare. The company will say it does not propose to drill, deepen or frack the well.

Frack Free Ellesmere Port and Upton has criticised the application for its potential impact on climate change, public health and the local economy. One of its expert witnesses, Colin Watson, said:

“This application lacks clarity and opens a Pandora’s box of things they can do. The application contradicts itself in many areas and our attempts to seek clarity have failed. Given they have such a track record of ignoring planning permission, I wonder what they will do this time.”

Friends of the Earth will also be speaking at the inquiry. Its North West campaigner Helen Rimmer said:

“Thousands of local residents and the local council have clearly said no to shale gas testing in Cheshire, while climate scientists warn that fossil fuels must be left in the ground if we are to avoid catastrophic climate change.

“Residents in Ellesmere Port already suffer from poor air – the last thing they need is another polluting industry on their doorstep.

“Instead of forcing dirty fracking on communities, the government should back clean renewable energy which could create thousands of new jobs in Cheshire.”

Rally: Campaigners are due to gather outside the inquiry at 9.30am today (15 January 2019)

IGas exploration plans are “in the heart of a community”, Ellesmere Port campaigners warn (10/12/2018)