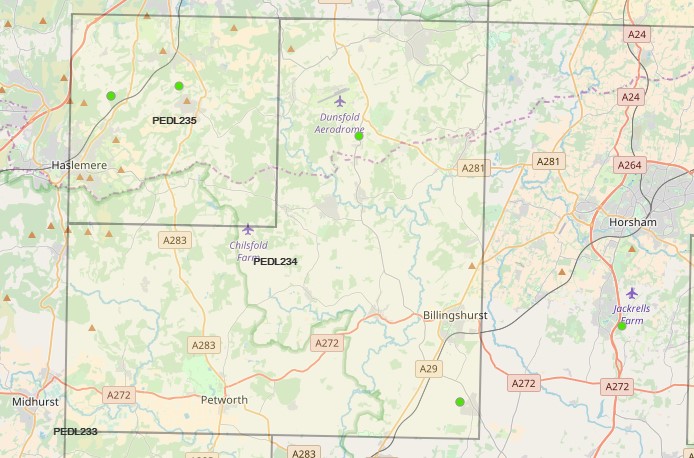 The company, which is the major investor at the Horse Hill oil site in the county, said it was preparing to apply for planning permission for exploration at Dunsfold, a small village, just over 8 miles south of Guildford. 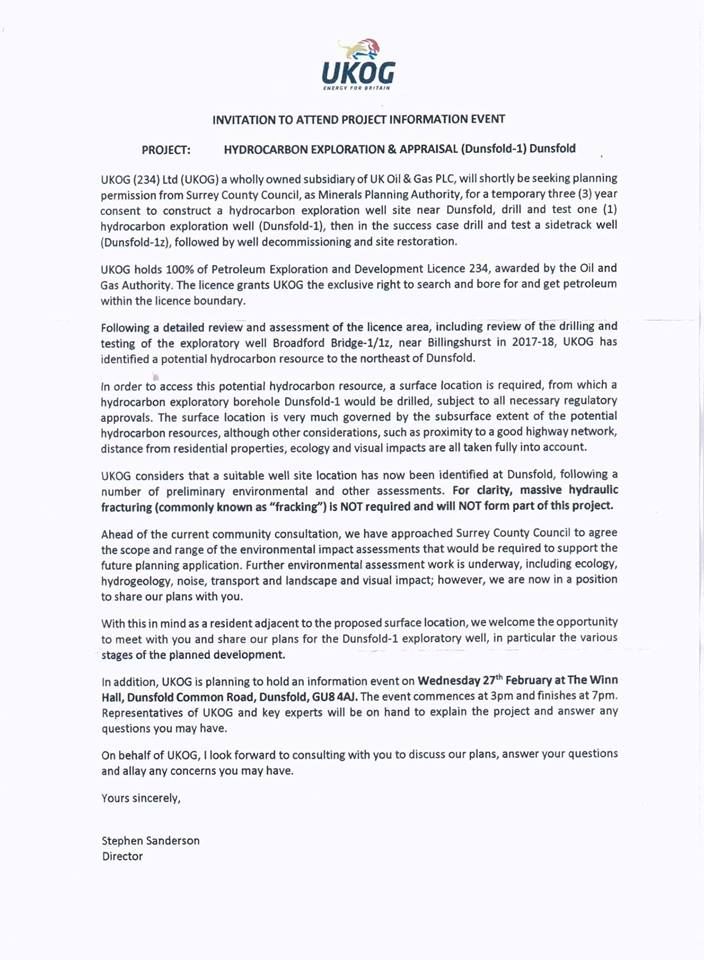 The proposed well site is north east of Dunsfold, the company said, but there are no further details of the exact location. Villagers have since said the site is locally-known as Pratt’s Corner.

“The surface location is very much governed by the subsurface extend of the potential hydrocarbon resource, although other considerations, such as proximity to a good highway network, distance from residential properties, ecology and visual impacts are all taken fully into account.”

The wellsite is in UKOG’s licence PEDL234, which also includes Broadford Bridge, near Billingshurst in West Sussex. That well was suspended in March 2018. Part of the reservoir had been described by UKOG as “unproductive because of low permeability”.

UKOG said in its letter

“massive hydraulic fracturing (commonly known as “fracking”) is NOT required and will NOT form part of this project.”

On the site location, UKOG said:

“Following a detailed review and assessment of the licence area, including a review of drilling and testing of the exploratory well Broadford Bridge-1/1z in 32017-2018, UKOG has identified a potential hydrocarbon resource to the northeast of Dunsfold.”

North east of Dunsfold is Dunsfold Park, a former wartime Aerodrome, which had been earmarked for a 2,500-home eco village. This project was refused planning permission and dismissed on appeal. At the time, the Secretary of State said the development would generate a considerable amount of additional road traffic and would have a severe and unacceptable impact on an overstretched local road network.

A revised scheme for 1,800 homes was approved by the government in March 2018.

UKOG said it had held discussions with Surrey County Council about the “scope and range of environmental impact assessments that would be needed to support the future planning application for the well site. It added:

A public meeting about the proposal is on Wednesday 27th February from 3pm-7pm, at The Winn Hall, Dunsfold Common Road, Dunsfold GU8 4AJ.

An updated document from the Oil & Gas Authority on company work programmes showed that UKOG had committed to drill three wells in PEDL234 by 2021.

The first, is a commitment to drill and test an exploration well through the Kimmeridge limestones on trend with the Godley Bridge 1 Portland gas discovery by 31 December 2019.