About 100 people braved torrential rain outside the Preston New Road site to talk to the Labour leader over tea and to listen to a short speech.

Earlier, Labour had released analysis which, it said, showed that fracking would stop the UK reaching a net zero target for carbon emissions by 2050, pushing the goal back by decades.

Mr Corbyn accused the new prime minister, Boris Johnson, of “bending the knee” to companies who wanted to profit from fossil fuel extraction and urged him to “change course”. He said:

“We need urgent action to tackle the climate emergency, and that means the prime minister immediately banning fracking once and for all.”

“I want to see a green industrial revolution in Britain.

“I want to see sustainability. We cannot go on with this level of CO2 emissions and global warming, otherwise we are all damaged if not doomed.

“A green industrial revolution will create around 400,000 jobs, high-skilled, good quality, well-paid jobs, all around the country.

“That is a future for our children.

“We have a short window, as a people, to reduce CO2 emissions, to prevent global warming beyond 1.5C, in order to protect the planet.

“I want to say well done everyone in Lancashire that opposed fracking here, as in Derbyshire and other places, in Sussex, and the way in which you have made sure the issue is kept alive.” 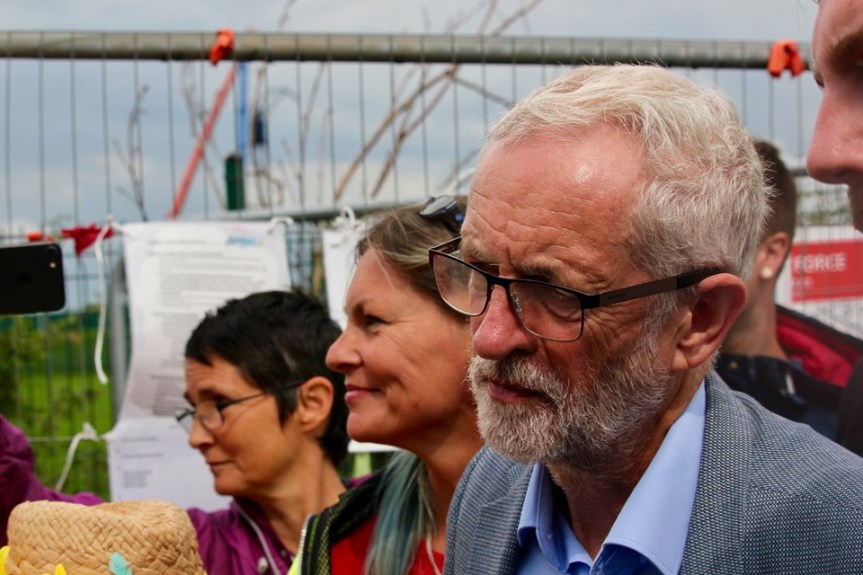 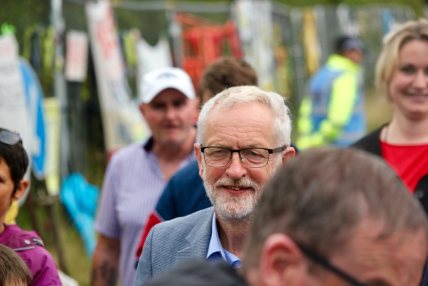 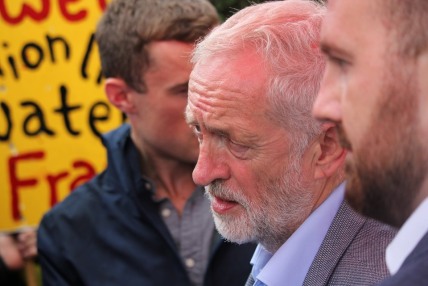 Mr Corbyn said Lancashire County Council had done “its best” in refusing planning permission for drilling and fracking at the Preston New Road site. But he said the then local government secretary, Sajid Javid, had intervened and overturned the refusal.

“Well a Labour government would intervene again and we would ban fracking all across the UK.”

“I’m here to announce our support for ending fracking, but I’m happy to talk to them because I do believe what they are doing is dangerous to our environment.”

Cuadrilla later tweeted at the Labour leader “left without taking up our offer of an on-site brew with some local people”.

“I am very disappointed that Labour appear to favour continued and increasing levels of gas imports by ship from the Middle East, Africa or the United States or by pipeline from Russia rather than developing a well-regulated job creating UK shale gas industry.

“The UK Committee on Climate Change (CCC) in its May 2019 report clearly forecast a very significant UK gas demand out to 2050 and beyond – approximately 70% of 2019 gas demand still existing in the year 2050.

“Under the CCC’s recommended pathway to net zero CO2 this gas would be used as both a feedstock for making hydrogen and a backup supply for generating electricity. Carbon Capture and Storage would accompany gas usage to ensure net zero CO2 emissions.

“The Labour Party has made it very clear that it opposes UK shale as a supply source for our required natural gas, but appears to have no policy or plan for where the UK’s gas supply should instead come from. We can only assume that it favours continued and increasing long distance gas imports.”

“Labour seems to want it both ways – no shale gas but no offshoring of emissions.

“But these are mutually exclusive propositions and Labour’s denial of the facts about home-grown UK production will only lead to us relying more and more on higher emission imports from Qatar and Russia.

“Leading independent climate change experts are clear- we will need natural gas well beyond 2050 to deliver Net Zero. Labour should be supporting the UK gas industry to create UK jobs as we work towards meeting our emissions targets.”

He said that, even with the Bacton pipeline for European imports under maintenance, the figure seemed implausible.

“Since March, Norway has reduced its overall gas shipments by about 16 percent for pipeline maintenance, cutting flows into the UK’s key Easington terminal by more than 80 percent.

“Meanwhile, the main UK export route, the Interconnector pipeline between England and Belgium, closed for repairs last weekend until May 1, cutting off a key transit route for flows into mainland Europe.”

Alun Davies, director of Europe power and gas at IHS Markit, has commented that April appeared to be a record high month for the import of LNG into the UK and added that with the Interconnector being offline, the U.K. market had no way of sending gas back to the continent via pipeline.

“I am questioning UKOOG’s seeking to forward their case based on temporary maintenance measures that will ensure we have natural gas supplies from lower emission sources for decades.”