Please let us know about missing results which you think should be included.

Labour’s Rosie Cooper, who has campaigned against fracking plans by Aurora Energy Resources at Altcar Moss, held her seat but with a reduced share of the vote. Ms Cooper took 27,458 votes (52.1%, down 6.8%). The Conservative candidate, Jack Gilmore, took 19,122 votes, a share of 36.3%, down 1.1%. Aurora’s planning application for the site on the edge of Formby is currently with Lancashire County Council.

The Conservatives held on to the constituency, which includes Angus Energy’s Balcombe site in West Sussex. Jeremy Quinn, first elected in 2015, had a majority of 21,127 (56.8%), down 2.8% on 2017. The Liberal Democrats, who said they would ban fracking, increased their share of the vote by 11% to 23.4% (14,773). Angus Energy has applied for planing permission to carry out long-term production testing at the site. A decision is expected in 2020.

The Conservative, Victoria Atkins, held this rural constituency where Egdon Resources drilled an oil exploration well in January 2019. The well was sealed a month later after failing to find its target. But Egdon’s partners have raised money to drill a sidetrack at the site. Ms Atkins took 72.7% of the vote (38,021 votes), up 8.7% on 2017. Labour’s candidate, Ellie Green, who came second, was down 9.2% (9,153 votes).

Sir Paul Beresford, who has been sympathetic to anti-drilling campaigns in the constituency, kept his seat with a 12,041 majority. His share of the vote, at 55.4%, was down 6.4% on 2017. The Liberal democrats increased their share by 15% to 34.3% (19,615 votes). The constituency includes the Angus Energy oil site at Brockham and the planned site at Bury Hill Wood, near Leith Hill, never drilled and now abandoned by Europa Oil & Gas. Lisa Scott, a campaigner against oil operations in the region, came fourth for the Green Party (1,874 votes). 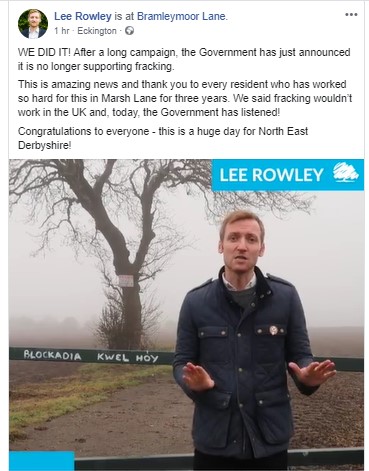 The Conservatives held Arundel and the South Downs – which includes UKOG’s Broadford Bridge site – with a new candidate. Nick Herbert, who had opposed plans to fast-track shale gas through the planning system, did not stand for re-election. His party’s replacement, Andrew Griffith, took 35,566 votes, a majority of 22,521 over the Liberal Democrats. The Conservatives share of the vote was down 4.4% on 2017.

Boris Johnson’s rival for the Conservative leadership, Jeremy Hunt, held on to the seat which now has a proposed UK Oil & Gas exploration site at Dunsfold. Mr Hunt polled 32,191 votes, a majority of 8,817 over the Lib Dems. He had slightly reduced share of the vote (-2.4%). Labour came third. There were no other candidates. The Dunsfold planning application is due to be decided by Surrey County Council early in 2020.

Labour’s Justin Madders, who opposed IGas operations in the constituency, including at a public inquiry, held his seat with 53.3% share of the vote and a majority of 8,764 seats. His vote was down 5.8%. The Conservative candidate, who took 35.4% saw her share fall 1.4%. The seat also includes the Ince Marshes, where IGas has said it wants to frack two wells. It has said it will wait for the decision of the Ellesmere Port appeal, which will be made by the local government secretary.

The Conservatives took this seat held by Labour since the constituency was formed in 1918. The party’s candidate, Alexander Stafford, said he opposed fracking at Woodsetts, where Ineos is waiting to hear if it has planning permission for shale gas exploration. He said he would “fight tooth and nail” to protect Woodsetts and other villages from fracking. He won the seat with 45.1% of the vote (21,970 votes), pushing Labour into second place with 32% (15,652). Ineos has planning permission to drill for shale gas at Harthill. Rother Valley had been held by Labour’s Sir Kevin Barron, who had been elected nine times but stood down before the election.

Crispin Blunt held Reigate for the Conservatives, with a majority of 18,310 over Labour. The constituency includes the Horse Hill oil site, which was granted permission for long-term oil production and five new wells in September 2019. Mr Blunt increased his majority in 2017 by nearly 700 votes but saw his share of the vote fall by 3.5%. Jonathan Essex, the local Green Party councillor and campaigner against onshore oil and gas operations, came fourth with 3,169 votes (6%).

Edward Leigh held the seat which includes Egdon’s Resources’ oil exploration site at North Kelsey site, near Caistor in Lincolnshire. He took 33,893 votes (66.4%) with a majority over Labour fo nearly 23,000. No work has been carried out at North Kelsey since the site was first granted planning permission in 2014. 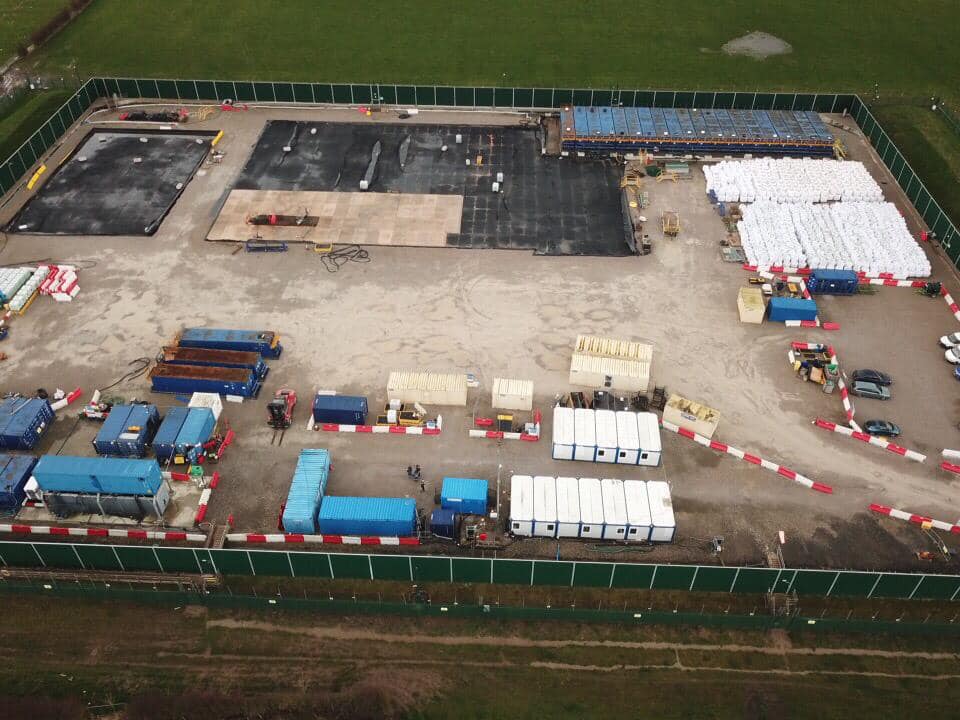 The Conservative, Mark Menzies, has called for a ban on fracking in the constituency since Cuadrilla’s operation at Preston New Road caused earth tremors. He increased his share of the vote by 2.1% and polled 28,432 votes. The Green candidate and MEP, Gina Dowding, took 1,731 votes, the share up 1% on 2017. Labour came second with 11,821 seats, the share down 8.1% on 2017.

The Conservatives took Bassetlaw from Labour. John Mann, who left parliament in October 2019, had opposed plans to fast track shale gas exploration. He held the seat since 2001 and Labour had represented it continuously since 1935. The new MP, Brendan Clarke-Smith, took 55.2% of the vote (28,078) and had a majority of 14,013.

Conservative Andrew Percy held this constituency north of Scunthorpe, where Egdon Resources wants to carry out long-term oil production at the Wressle site. A decision on Egdon’s appeal was held up by the election and could now be imminent. Mr Percy secured 30,941 votes, a majority of 21,941. His share of the vote, on 71.3%, was up 10.9%.

Labour’s Mike Amesbury just clung on to Weaver Vale in Cheshire with a majority of 562. Mr Amesbury has campaigned against fracking in his constituency, which has Ineos shale gas licences, and the wider region.

Ed Davey, now one of two joint acting leaders of the Lib Dems, held Kingston & Surbiton with an increased share of the vote. He polled 31,103 (51.1%), ahead of the Conservatives on 20,614 (33.9%). Mr Davey has claimed that his traffic light system on induced seismicity, introduced during the Conservative-Lib Dem coalition, had stopped or suspended many fracking projects.

Labour’s fracking supporter, Caroline Flint, lost her seat in Don Valley. The seat, held continuously by Labour since 1922, went to the Conservative, Nick Fletcher, with a majority of 3,630. The constituency has exploration licences held by IGas and Egdon Resources

The anti-fracking Conservative, Zac Goldsmith, lost his seat in Richmond Park to the Liberal Democrat, Sarah Olney. She polled 34,559 votes, a majority of 7,766, increasing the Lib Dem share of the vote by 8%.

Andrea Leadsom, the business and energy secretary who announced a moratorium on fracking last month, held Northamptonshire South for the Conservatives. She took 41,755 votes (62.4%) with a 0.1% reduced share of the vote.

Caroline Lucas held her seat for the Greens at Brighton Pavilion, increasing her share of the vote by 4.9% to 57.2%. Labour came second and the Conservatives third. Ms Lucas has campaigned against fracking and the UK onshore oil and gas industry. She was arrested but acquitted of obstructing the highway after protests outside the Balcombe oil site in West Sussex. She remains the only Green Party MP in parliament

Labour’s Chris Matheson held City of Chester, where IGas holds exploration licences. He gave evidence at the IGas inquiry into plans to test for gas at Ellesmere Port. His share of the vote fell 7.1% but he had a 6,164 vote majority over the Conservatives.

Labour’s veteran and an anti-fracking campaigner Dennis Skinner lost Bolsover to the Conservatives. He had held the seat, where Ineos now has shale gas licences, since 1970. Until last night, Bolsover has returned a Labour MP since its creation in 1950. The Conservative, Mark Fletcher, took the seat with 21,791 votes (47.4%), a majority of 5,299.