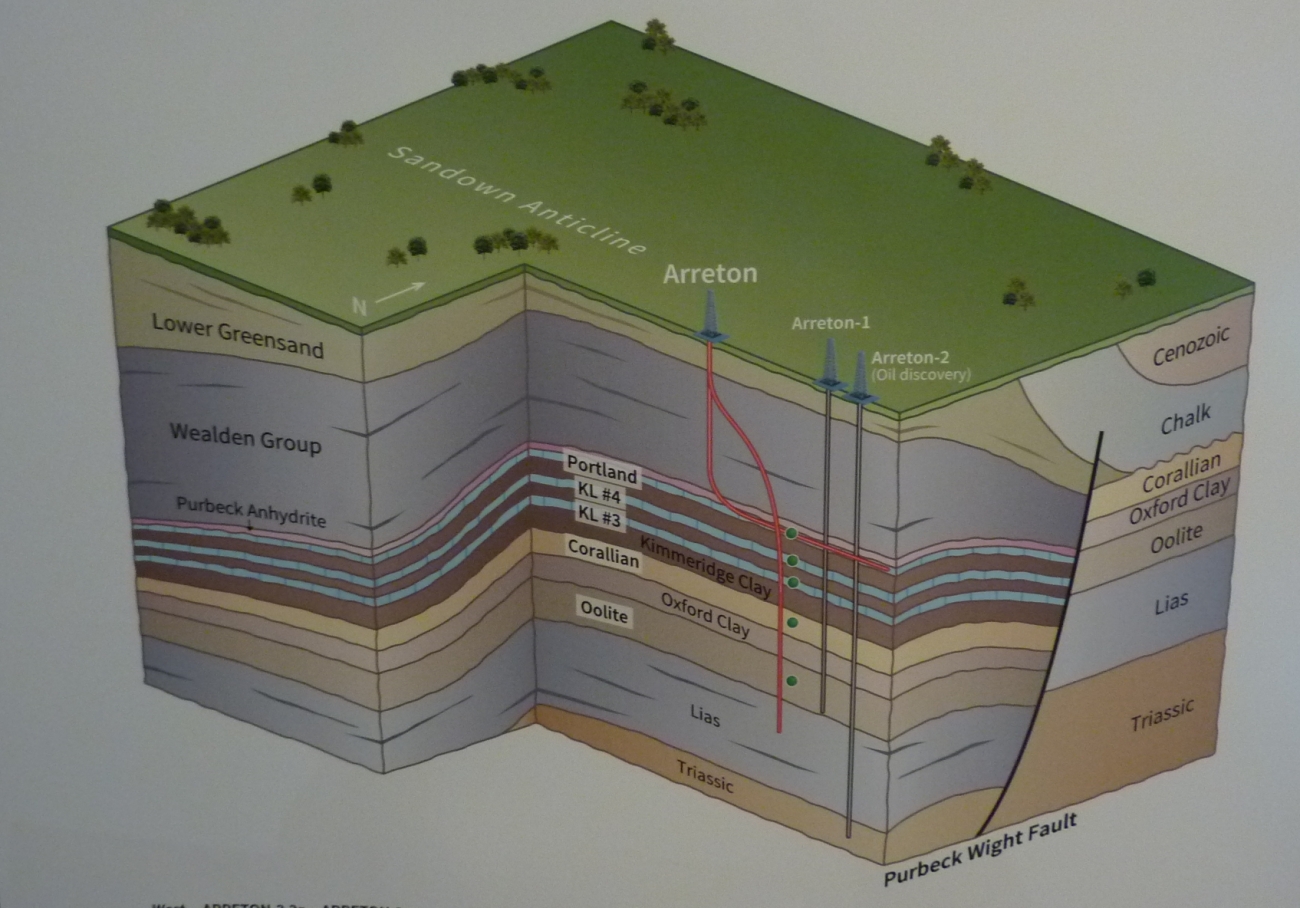 At an information event near Newport, the company said it was preparing to submit planning applications early next year for sites near the villages of Arreton and Godshill. Meeting brochure (pdf)

Both are on privately-owned farmland outside, but close to, the boundary of the Area of Outstanding Natural Beauty (AONB).

UKOG said it would seek permission from Isle of Wight Council to drill and test a vertical and sidetrack well at each site.

The sidetrack wells would target the Portland oil formation at about 3,000ft or 900m. The vertical well would be drilled down to 5,600ft or 1,700m. 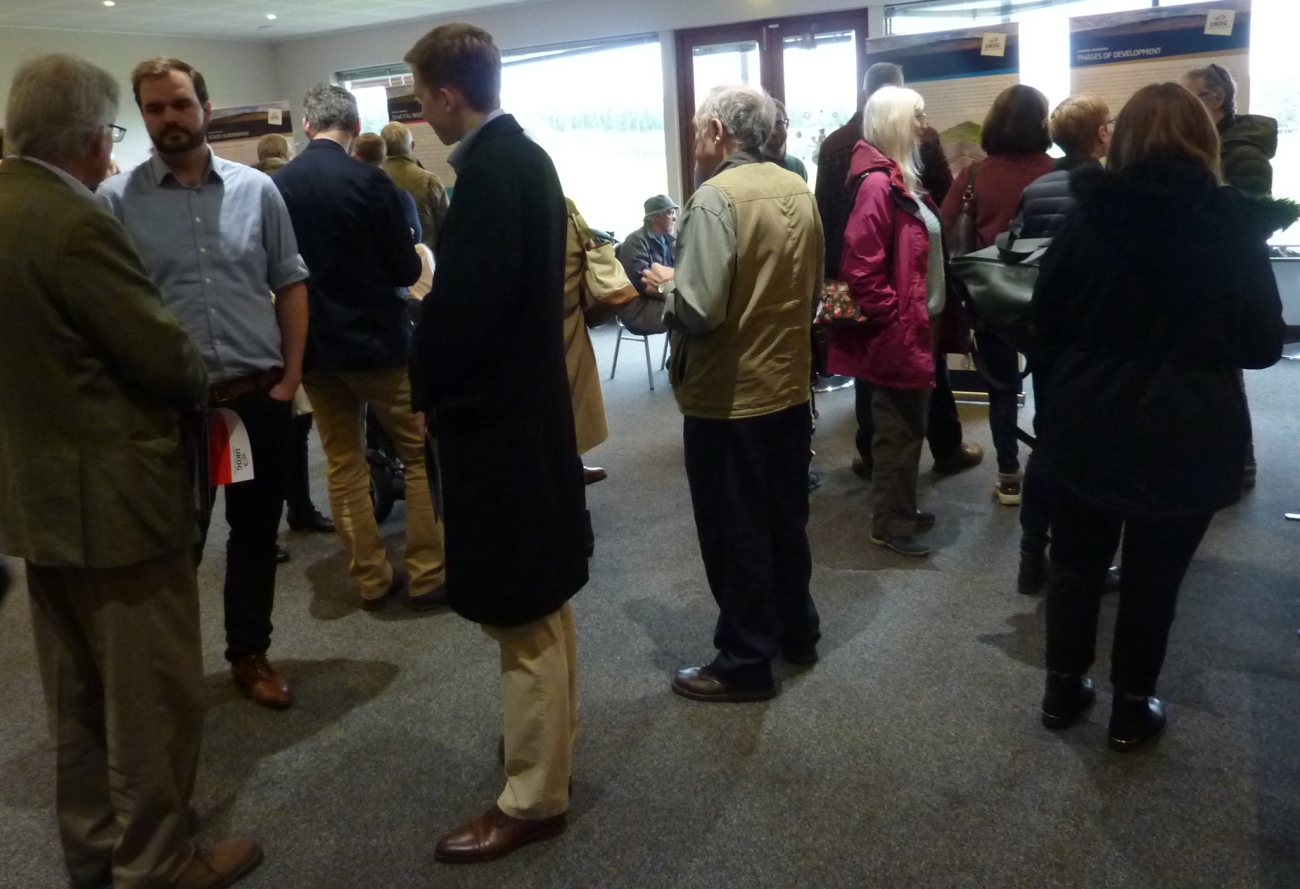 He said the sites could each produce 500 barrels of oil per day. This could, he said, be enough to supply 90,000 cars on the island.

If successful, he said, each site could generate £0.5bn during its lifetime.

Opponents of the proposals have said the developments would put at risk the island’s supply of drinking water. They were also concerned the schemes would industrialise the countryside and threaten tourism and the Isle of Wight’s ecological aspirations. Some people said the oil should be left in the ground for climate change reasons.

UKOG said the Arreton site is about 600m from previous wells last drilled in the 1970s, which identified oil.

The site is north of the Newport-Sandown road (A3056), about 600m from the nearest home. Arreton village is about 1km to the east and Blackwater is 1.6km to the west.  The company proposes to build a new road junction and a vehicle access road as part of the scheme.

The Arreton geology is described by UKOG as a “look-alike” for that at its Horse Hill exploration site in Surrey.

The Godshill site is off the Whitewell Road, 400m from the nearest home. The village of Godshill is 1km to the north and Roud is 600m to the south.

No previous wells have been drilled at Godshill and the company is using seismic surveys carried out in the 1970s. There are no plans to do new seismic testing.

None of the 10 wells drilled on the island are active. DrillODrop asked Mr Sanderson why UKOG expected to be successful when other companies had failed. He said:

“They were looking for another Wytch Farm [the UK’s largest onshore based oilfield] in deeper geology. We are looking in shallower geology.

Mr Sanderson said UKOG would “only drill Godshill if Arreton is successful.”

But the brochure and display panels said:

“It is yet to be decided if the two projects are to be treated as individual projects running independently of each other but not necessarily at the same time, or alternatively, as a concentrated cooperative approach with benefits of scale and efficiency in an attempt to minimise disruption during mobilisation on and off the island.”

There were more than 30 visitors at the event during mid-afternoon.

“I am pleased they have come and want to find out the facts. People seem very interested in gaining information, which is the object of the exercise.”

One person described the exhibition as “very measured”. Another said:

“This is not about consultation. They are telling us what they want to do. This is just about mitigating local impacts.”

One person complained the company was “evasive” when asked the names of the owners of the land that would be used. Another person said a representative walked away when asked whether the development was appropriate at the time of a climate and ecological crisis.

A woman said she was unhappy that UKOG did not appear to have spoken to local environmental groups, such as the wildlife trust.

A person filming the event was asked to leave and escorted from the room by security staff.

Isle of Wight Council has declared a climate emergency and approved a motion aspiring to achieve net zero carbon emissions by 2030. It also established a task force to achieve this target.

“We should moving away from fossil fuels. We should be cutting down on the amount of plastic that is produced.”

“I came here already believing that none of this oil should come out of the ground. There is nothing here to make me change my mind.”

UKOG display panel on the uses of oil

UKOG’s literature stressed the valuable uses of oil, from pharmaceuticals to the blades on wind turbines.

“Current lives are inextricably linked with oil. We have to change but the solution is not to stop everything and reverse back to the early 20th century.”

“The carbon footprint will be far lower to produce oil at Arreton, 20 miles from the Fawley refinery, than import oil from Saudi Arabia or Texas.”

UKOG repeated several times that it was not a fracking company and would not use fracking to extract the oil on the Isle of Wight.

It said it would use an acid wash to clean the well. Asked by DrillOrDrop whether it would  inject acid under pressure, Mr Sanderson said this was not necessary:

“The rocks have sufficient fractures to flow. We just need to ensure that we clean the perforations in the well.”

On fracking, one person at the event said:

“From past experience I do not trust them.”

About 30% of the island’s water is imported. Frack Free Isle of Wight said the developments would use a lot of water, could threaten the quality of local groundwater and would create a lot of waste.

UKOG has said the drilling operation would be carried out during the winter when the island was self-sufficient in water. It said Arreton and Godshill would be “zero discharge sites”.

UKOG has argued that the two applications do not need environmental impact assessments (EIA). Its consultant said:

“We did not identify any impacts that would be significant.”

The company is still waiting to hear from Isle of Wight Council whether the planners agree. The council has promised a response before Christmas.

The company said it had chosen the two sites because they were outside the AONB, which covers a large part of the island.

At Arreton, the view from the nearby ridge would look over the top of the 35m rig, a consultant said, and the drilling rig would be on each site for a maximum of 60 days.

An opponent of the scheme said even the new access road that would be required at the Arreton site would result in industrialisation of the countryside.

Both sites are in the horticultural heartland of the island. The Arreton site is close to a major tomato grower. 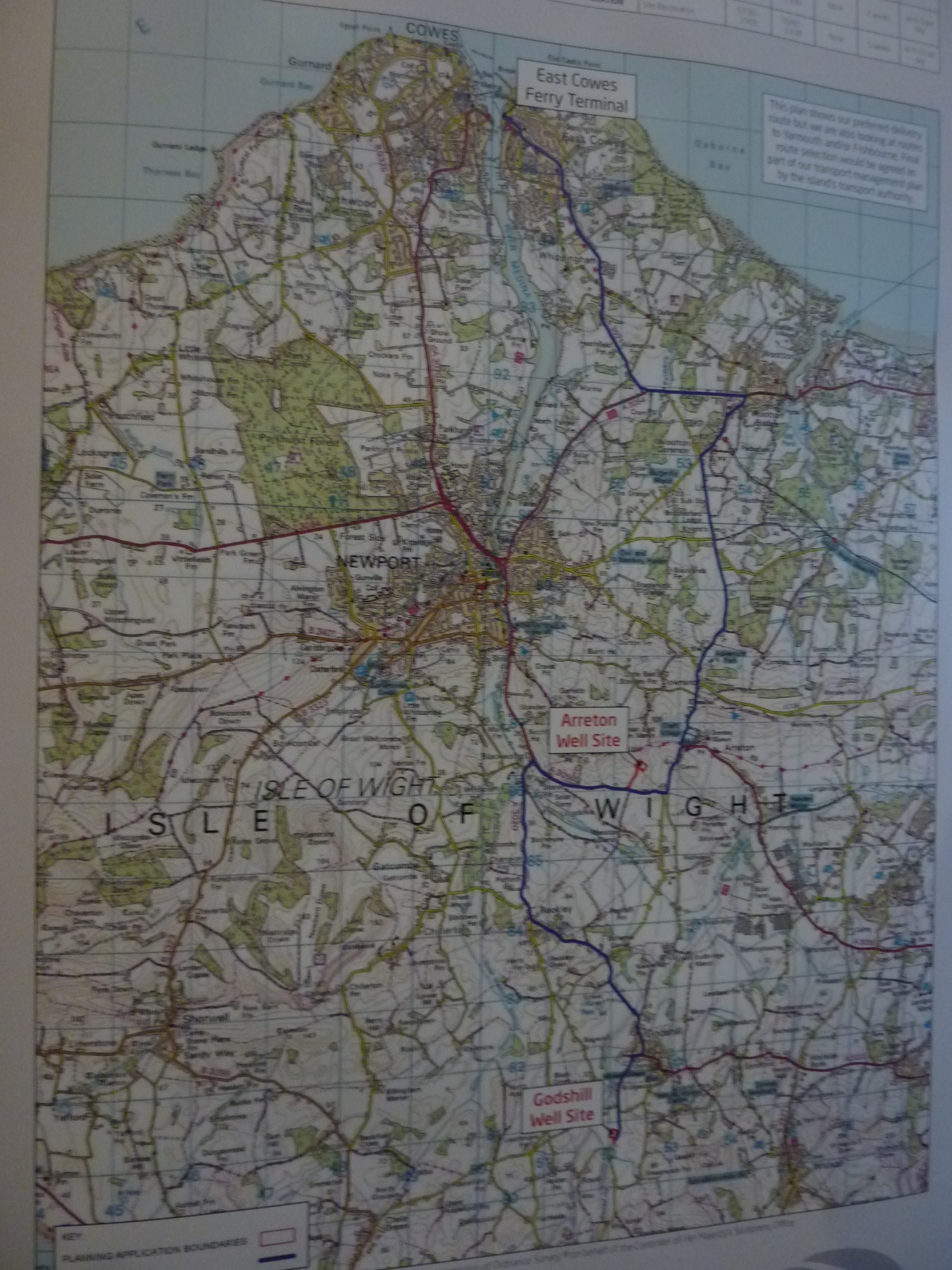 If the sites were approved, oil would be exported by tanker through Godshill, Rookley and past Arreton and Wootton Bridge to the East Cowes lorry terminal. The oil would be processed at a refinery in Hampshire. The same route would be used by construction traffic.

UKOG denied that it would “create HGV chaos”. But some people at the information event raised concerns that tankers and heavy goods vehicles would travel through their villages.

UKOG said it would give a proportion of the revenue from the sites to the local community. The scheme would be voluntary and Mr Sanderson conceded that the company had not devised a scheme. But he said:

“It is right that people benefit from what is produced locally.”

One person said in response:

“We do not want your money. This is a bribe.”

“The only real money is going to go to the landowners who allow their fields to be used.”

Several people at the event questioned how UKOG could fund the drilling on the Isle of Wight because it had no sites yet in full production.

Mr Sanderson said the company aimed to put the Horse Hill site into full production by September 2020 and this would generate cash for other activities. He said:

“When we have established a production facility at Horse Hill, we will also be able to borrow money from debt if we need to, based on the value of the oil in the ground.”

Reporting from this event was made possible by individual donations from DrillOrDrop readers. We will follow the progress of the proposals through the planning system.