No rebound in sight for US shale. Petroleum Economist reports that US crude production will continue to be squeezed despite the modest oil price upturn and faces a long-term existential threat in the form of the Democratic manifesto.

Shell to take up to $22bln writedown after climate review. Reuters reports that Royal Dutch Shell will write down the value of assets by up to $22 billion after lowering its long-term outlook on oil and gas prices.

US shale gas giant brought down by big debts and oil slump. The Guardian reports on the collapse of Chesapeake Energy and says the coronavirus lockdown was the final straw for the fracking pioneer.

BP sells petrochemical business to Ineos for $5bn. Ineos will pay BP a deposit of $400m, followed by $3.6bn when the deal completes and then another $1bn in three instalments by June 2021. Guardian, Bloomberg, Reuters, BP press release, Business Live (30/6/2020)

Ineos ‘under-reporting’ climate emissions, says regulator. The Ferret reports action by the Scottish Environment Protection Agency which says Ineos has underestimated climate pollution from chemical plants at Grangemouth since 2016. The agency has withdrawn previously published data on emissions from Ineos Chemicals and asked the company to review a discrepancy in its figures. Ineos has omitted in error carbon dioxide emissions from a gas boiler at Kinneil terminal on the Firth of Forth, as well as some flaring, the Ferret reports.

Chesapeake Energy, a pioneer in the U.S. shale revolution, files for bankruptcy protection. The poster child of the US shale revolution field for bankruptcy protection on Sunday. The move comes as the company and industry has been rocked by a drop in oil and gas prices amid the coronavirus pandemic. Chesapeake said a $7 billion debt would be wiped out through restructuring. The Guardian, CNN, CNBC, Energy Voice, FT, Bloomberg

Green recovery can spur innovation, create jobs, and boost economy, argue senior MPs. Business Green reports that select committee chairs have joined calls for a green recovery in a letter to the chancellor. They warn that economic stimulus channelled towards carbon-intensive infrastructure projects would be a historic mistake.

Extra £14bn needed a year for climate, report says. BBC News reports on a call by the Green Alliance for an extra £14 bn each year for clean transport, nature restoration and low-carbon buildings.

Hydrogen fuel bubbles up the agenda as investments rocket. The Guardianreports on a spate of new investments even amid the coronavirus pandemic.

Atrocious governance in oil and gas allows huge rewards for failure. Myles McCormick, in an opinion piece in the FT, says while US oil and gas companies approach bankruptcy with 100,000 job losses, executives of failing companies have awarded themselves tens of millions of dollars in bonuses.

UK agrees $1bn backing to Mozambique gas pipeline despite environmental concerns. The Telegraph and Times say the prime minister will go ahead with the loan guarantee despite warnings that it will damage Britain’s environmental credentials.

Is it up to China to decide whether fracking ever happens onshore in England? Guest post for DrillOrDrop from Ben Dean on links between two UK fracking companies and China.

Fracking moratorium will be lifted – but this year, says Cuadrilla’s owner. DrillOrDrop report on AJ Lucas statement predicting no lifting of the moratorium before 2021. Lancashire Evening Post (25/6/2020)

US shale companies face $300bn in writedowns in Q2. The FTreports that US shale companies could be forced to write down at least $300bn of their assets in the second quarter, as operators begin to account for the oil-price collapse on their balance sheets, according to a new study. The huge impairments — about half the net value of the companies’ property, plant and equipment — would increase the sector’s leverage from 40 per cent to 54 per cent, triggering insolvencies and restructuring, says the study by Deloitte, an accountancy.

Britain still failing on climate crisis, warn advisers. The Observer reports ministers are bracing themselves for a powerful new rebuke from the government’s own advisers over the nation’s inadequate response to the climate crisis. In its annual progress report, to be published on Thursday, the Committee on Climate Change will lambast continuing failures by the government to tackle the issues of overheating homes, flash floods, loss of biodiversity and the other threats posed as our planet continues to overheat dangerously. 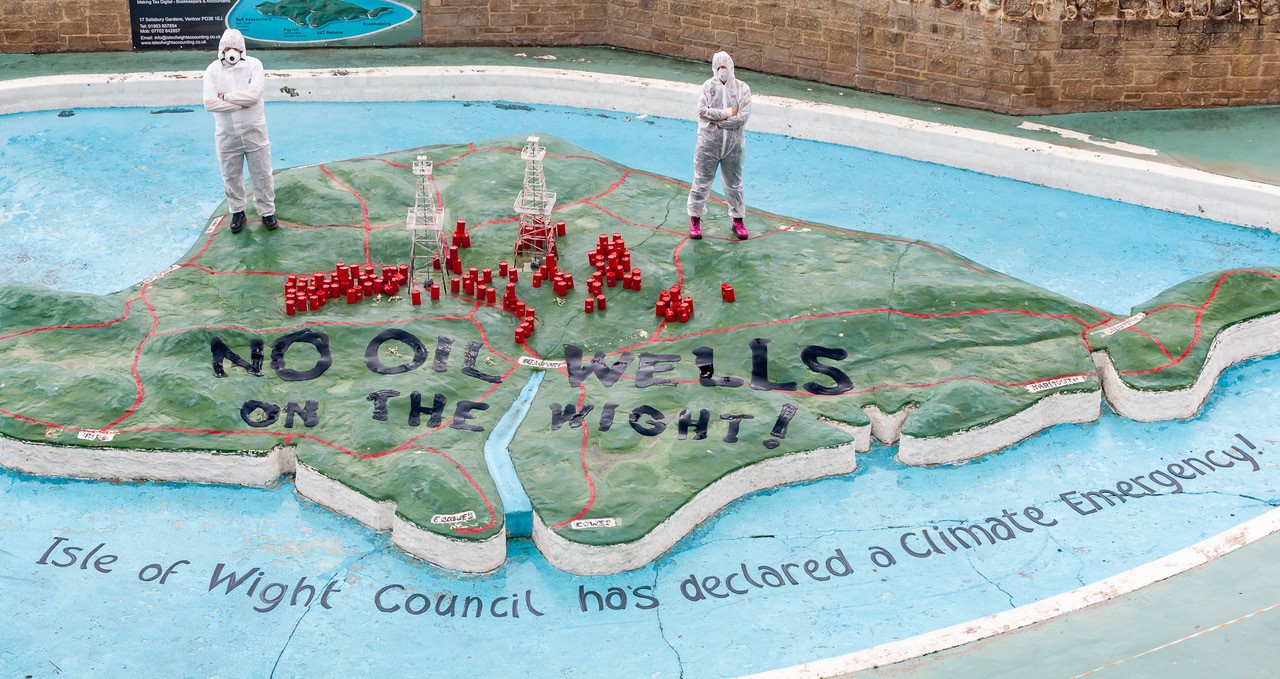 Ventnor protest at UKOG drilling plans for Isle of Wight. Environmental campaigners sent a message of opposition from the paddling pool on Ventnor seafront to UKOG’s plans to drill for oil on the Isle of Wight. Comments on the plans must be submitted by 24 July 2020. The campaigners said:

“If people don’t take action and comment, then it could be passed. There is a time for taking action on this, and it is now.”

“Caravan of love” fracking trial dropped “in public interest”. DrillOrDrop report on the decision by the Crown Prosecution Service to discontinue charges against anti-fracking protesters who parked a caravan outside Cuadrilla’s shale gas site at Preston New Road.

IEA: “Green” coronavirus recovery would keep global emissions below 2019 peak. Carbon Brief reports on comments by the International Energy Agency that the world has a once-in-a-lifetime opportunity to “pour investment into clean energy and create millions of new jobs”.

Coronavirus will hasten ‘peak oil’ by three years says research firm. The FT reports that Oslo-based Rystad Energy has cut its estimate of potential oil production by an amount that exceeds the reserves of Saudi Arabia, as the coronavirus accelerates longer-term structural changes to the market.

Implications of BP write-downs ‘are very real’ as some upstream assets become worthless. Energy Voice reports comments by analysis from Wood Macenzie that BP was “getting to grips” with a slump in the value of its assets, with some now worth nothing at all.

Special Report: Millions of abandoned oil wells are leaking methane, a climate menace. Reutersreports from on what it calls a growing global problem of abandoned oil and gas wells, many of which are leaching pollutants into the air and water. The problem could get worse, the news wire says, as drilling companies go bankrupt because of low oil prices.

BP expects to take $17.5bn hit due to coronavirus writedown. The Guardianand others report that BP will slash up to $17.5bn (£14bn) from the value of its oil and gas assets, and may be forced to leave new fossil fuel discoveries in the ground, after its own forecasts found the Covid-19 pandemic may affect the world’s oil demand for the next 30 years.

US shale oil output to drop to near 2-year low – EIA. Reuters reports that the US Energy Information Adminstration has estimated that US oil output from seven major shale formations is expected to fall to near a two-year low of 7.63 million barrels per day by July.

US-UK trade agreement: What could be the major stumbling blocks to ‘massive’ deal? Sky News suggests that the UK moratorium on fracking could be under threat from US companies that want to operate here.

Oil heading for first weekly drop since April due to virus recovery fears. Energy Voice reports oil is heading for the first weekly loss since late April in New York on fears a second wave of U.S. infections could derail a fragile recovery, while swelling stockpiles raised fresh concerns about excess supply.

Surprisingly rapid rebound in carbon emissions post-lockdown. The Guardian reports that carbon dioxide emissions have rebounded around the world as lockdown conditions have eased, raising fears that annual emissions of greenhouse gases could surge higher than ever after the coronavirus pandemic unless governments take swift action.

British Gas owner Centrica to cut 5,000 jobs. BBC News reports that most of the cuts would fall in the UK as Centrica seeks to slim down its business.

Policing cost of the Lancashire fracking site almost reached £13m. The Blackpool Gazette reports on the costs of the policing operation outside Cuadrilla’s Preston New Road site. DrillOrDrop reported this figure on 28 March 2020.

Lancashire’s police commissioner vows to lobby for more central Government cash to cover the near £13m bill for fracking. The Blackpool Gazette reports comments by Clive Grunshaw, the PCC for Lancashire, that it was unfair for the county to pay the nearly £13m cost (see above) as communities and councils had rejected planning permission for shale extraction.

Oil major BP to cut 15% of workforce. Reuters reports that BP is cutting 15% of its workforce in response to the coronavirus crisis. The news service says this is part of chief executive Bernard Looney’s plan to shift the oil and gas major to renewable energy.

Boris Johnson considers giving drivers up to £6,000 in diesel and petrol car scrappage scheme. The Telegraph, in an exclusive, reports that the prime minister is expected to make the announcement on 6 July 2020, in a bid to help the struggling UK electric car industry.

Application to extend Saltfleetby pipeline. Angus Energy reports it has applied to Lincolnshire County Council for a 750m extension of the pipeline from Saltfleetby to the National Grid Terminal.

Fossil fuel profits could collapse by two thirds in coming years, threatening pension value for millions. The i reports on Carbon Tracker research which concludes that the fossil fuel industry is in “terminal decline” because of climate policies and the growth of renewables. Also reported by Business Green and the Guardian

Green Recovery: Greenpeace sets out manifesto for clean stimulus plan. Business Green reports on proposals from Greenpeace on how government could ensure the Covid-19 recover delivers “a fairer, greener and more resilient global economy. See also reports in the Guardian and BBC News

Living near oil and gas wells linked to low birth weight in babies. The Guardian reports on research by University of California, Berkeley which concludes that living near active oil and gas wells during pregnancy increases the risk of low birth weight babies, especially in rural areas. The research, published in the journal Environmental Health Perspectives, looked at the records of nearly three million births in California to women living with 10km of at least one oil or gas well between 2006 and 2015.

UK doubled its support for fossil fuels since signing Paris Agreement. DeSmog UK reports on research by Oil Change International and Friends of the Earth US which concludes that the UK spent an average of 1.3 billion annual on fossil fuel projects, doubling its public finance support in the three years after signing the Paris climate agreement.

Conservative MP opposes UKOG plans to drill for oil on the Isle of Wight. DrillOrDrop report

Permian gas pollution halves in upside of oil crash. Investment Money reports gas pollution in the US Permian Basin, the world’s most prolific oilfield will halve in the coming months, providing an environmental upside to the worst crash in the price of crude in decades.

Make Covid-19 recovery green, say business leaders. BBC News, and others, report that more than 200 top UK firms and investors are calling on the government to deliver a Covid-19 recovery plan that prioritises the environment.

Methodist Church misses out on millions by dumping oil stakes during crisis. The Telegraph reports that Methodists put ethics before profits after its two-year divestment analysis concluded just as the oil price hit unprecedented lows. The church offload stakes in BP and Total on climate grounds.