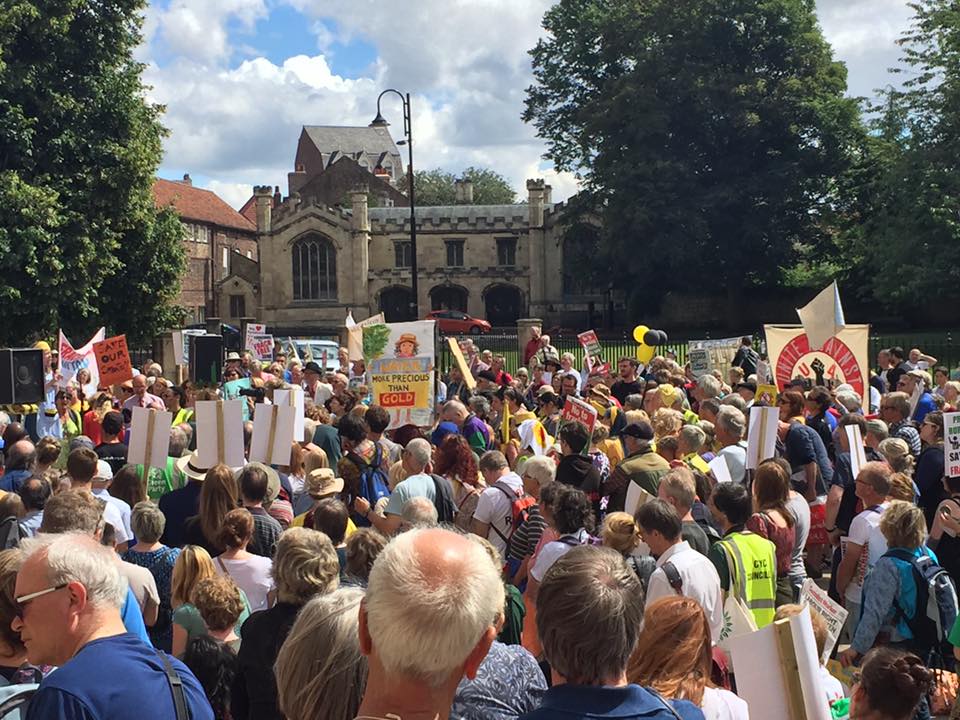 Anti-fracking demonstration in York in July 2016

City of York Council is reconsidering its counter-terrorism strategy which lists anti-fracking campaigners as a threat, alongside the PKK, a separatist group involved in an armed struggle in Turkey.

North Yorkshire Police has also confirmed that it does not see anti-fracking activities as a terrorist risk. 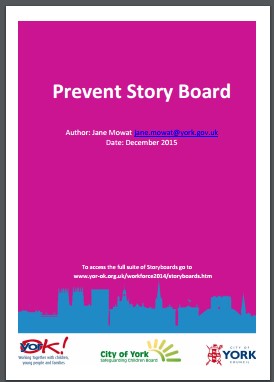 Online access to a document, which sets out how City of York delivers the Prevent counter-terrorism strategy, was removed by the council today.

It described the key risks to York, identified by counter-terrorism officers as:

Download a pdf: York Prevent strategy
A council spokesperson confirmed this afternoon that the council was reviewing the strategy.

“To avoid any doubt, anti-fracking protesters ‎are not seen as a terrorist threat by the police in North Yorkshire.

“On the contrary, the groups of local protesters have been nothing but peaceful and respectful of the law.

“Not one arrest has been made in connection with protest action associated with the issue in our area.

“We will continue to liaise with all groups involved in the issue, to ensure people’s right for lawful protest, maximizing the safety of all concerned, while minimising disruption to the wider community.”

“As part of the wider Prevent agenda, all local authorities are required to identify any area of activity or campaigning where extreme actions may be identified as a risk to the wider community or may pose a threat to individuals or organisations covering a wide range of interests.

“Most organised protest groups – including the majority of anti-fracking campaigners – have been peaceful in their right to protest, however, since 2010, local authorities monitor any activities where there is potential for community tension.”

Lars Kramm, a Green Party member of the council, said he was shocked that peaceful opposition to the government’s shale gas policy was classed as terrorism.

“The majority of people and councillors in York share the grave environmental concerns raised by campaigners and local residents. Anti-fracking protesters in Yorkshire and across the country deserve praise for their actions, not legal proceedings and stigmatization as terrorists.”

“To my knowledge I know of no violence by anti-fracking protesters. We fight fracking with cakes not with violence.”

A junior school in West Sussex has also removed references to anti-fracking activities from its Prevent strategy after several local campaigners complained.

“We are genuinely sorry if this has caused offence.

“Following concerns raised by a local community group, we have removed any reference to fracking from our Prevent Policy with immediate effect.

“When writing the policy, we looked at all issues arising internationally, nationally and locally which were provoking very strong reactions in the county on all sides. We included fracking for this purpose only.”

This is the second school to rethink its approach on anti-fracking campaigns.

“it is not the view of the school that anti-fracking is a form of extreme behavior and we apologise that the link has been made.”

In Merseyside, Special Branch officers have given presentations to schools and colleges which list anti-fracking campaigners alongside extreme left and right-wing groups, “Irish related republican and loyalist” organisations and international groups.

DrillOrDrop asked the Merseyside Police and Crime Commissioner, Jane Kennedy, whether she thought this was appropriate. In a statement, she said:

“I have consulted the Force regarding the document and I can confirm it is part of a presentation which is delivered to a range of audiences to increase awareness of potential terrorist threats.

“This particular slide is a talking point to prompt discussion about a range of issues relating to protecting people and communities. It is certainly not designed to group all protest groups or people who are campaigning on a particularly topic together, but rather to look at issues that could potentially engender extreme views.

“When delivering this presentation the officer would provide a far greater level of detail and context as to why each of the subjects was included and make it clear that the Force respects the right of people to protest when it is proportionate and within the law.”

A statement from Merseyside Police said:

“The document in question is a Prevent PowerPoint presentation, personally delivered by specialist Prevent officers to partners and local businesses, to raise awareness and improve understanding of the potential threats to the UK.

“The slide in question is used as a prompt to discuss the range of behaviours from protest groups across the spectrum, it is not categorising all single issue protestors as extremists. Taken out of context, the slide alone can be misinterpreted. This slide would normally be discussed with the audience to ensure that balance is given; it is not about demonising legitimate lobbying groups or campaigners.

“The police respect the right to peaceful protest and this is made clear in the presentation delivery.”