Opponents of shale gas in the west country are celebrating a series of recent council votes against fracking.

In the past fortnight, Conservative-controlled Gloucestershire and Herefordshire County Councils have backed anti-fracking motions while Forest of Dean District and Watchet Town Councils have declared themselves Frack Free Zones.

Conservative-led Forest of Dean District Council overwhelmingly supported a call for the area to be declared a frack free zone.

The motion, proposed by the leader of the Labour group, Cllr Di Martin, was backed by 30 councillors. Three voted against and one abstained.

Cllr Martin, who represents Cinderford, said the vote would “send out a strong message from across the political, groups that we are, and will remain, a frack free zone”.

“This Council recognises that the Forest of Dean could be licenced in future for fracking against local wishes and notes community surveys which have been carried out in some villages (namely Parkend, Brierley, Central Lydbrook Drybrook, Etloe, Pope’s Hill and Flaxley) which show a clear majority (between 74% and 99%) are opposed to fracking and only between 1% and 7.5% for it.

“To further confirm there is “no social licence” for fracking, this council declares the Forest of Dean a frack free zone, and/or supports any town and parish councils in making ‘frack-free zone’ declarations, and gives consideration to road signage as confirmation.

“The areas will be logged on a national map of ‘frack free zones’ (as other towns/parishes/communities including in Somerset and Falkirk, Scotland have already declared themselves frack free zones) and will be cited as a material consideration if any planning applications arise.”

Owen Adams, of Frack Off Our Forest, said of the council’s vote:

“This [Frack Free Zone] designation must be considered as a material consideration and is extra armour for our environment and communities, and is also official confirmation of no social licence. It’s local democracy asserting itself, and it also shows widespread recognition of the fragility of this beautiful but heavily mined area, which was once known as the prettiest coalfield in the country! “

Mr Adams said the idea of a frack free zone for the Forest of Dean had first been discussed in November at a screening in Cinderford of the US film Groundswell Rising, which was attended by some councillors. He said:

“Within one week, Cinderford Town Council decided to declare its parish – which covers about half of the central forest – a Frack Free Zone, and designs for new road signs at the entrances to the town are currently being finalised. Councillor Di Martin then moved it up to the district council.”

Minutes of meeting on 8 December 2016 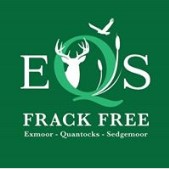 Watchet councillors declared their town a Frack Free Zone at a meeting on 5 December. Members voted by six in favour with two abstentions. The vote followed an earlier presentation by Frack Free Exmoor, Quantocks and Sedgemoor (Frack Free EQS).

Watchet, on the Somerset coast, is in the exploration licence area PEDL344, issued earlier this year to South Western Energy. The company also holds PEDL320 and 321 covering the coast between Burnham-on-Sea and Weston-super-Mare to the edge of Clevedon.

“This could have legal standing because large-scale national infrastructure projects are supposed to have a ‘Social Licence’.

“If, as we sincerely hope, Somerset County Council declines planning permission for the soon to be expected application(s) from South Western Energy, and if the Government then decides to overrule local democracy, as has happened in Lancashire, then a judicial review may treat Watchet’s decision to be a Frack Free Zone as a material consideration.

“The more Councils that take this step, the more evidence there is to prove that there is no social licence for fracking.”

Last week, Herefordshire Council voted overwhelmingly for a motion against fracking and hydrocarbon extraction in the Wye Valley.

A council spokesperson told DrillOrDrop one member abstained and all the rest supported the motion.

“The Executive be asked to consider the risks of hydraulic fracturing, and the high importance of tourism income to this County and to write accordingly to the Secretary of State to ask the Government to consider withholding any licence which would allow fracking and any associated hydrocarbon extraction processes in or under Herefordshire’s vitally important Areas of Outstanding Natural Beauty.”

The proposer of the motion, Cllr P D Newman, said

“While I personally have nothing against Fracking in principle, I do not believe that Fracking should be permitted in and around our most precious and “protected” environments and landscapes, until its safety has been proven in other areas of our unique and complex UK geology.”

The eastern half of Herefordshire was offered to oil and gas companies in the recent 14th licensing round. Parts of two blocks in the county, SO51 and SO61, both in the Wye Valley, were offered to South Western Energy.

Cllr Newman (pictured left) said any exploration in the Wye Valley was expected to target coal bed methane, not covered by the government’s surface development restrictions on hydraulic fracturing for shale gas. This meant extraction would not be banned from the surface of an Area of Outstanding Natural Beauty (AONB).

“Oil and gas extraction in and around our AONBs is a threat to our attractiveness as a tourist destination and, given our exceptional reliance on tourism for this County’s income and jobs, it represents a significant threat to the successful delivery of our core plan.”

South Western Energy announced in September it would not be taking up the licences at this stage.

Cllr Newman said it was unclear whether the licence blocks could be reoffered and when areas in Herefordshire may next be licensed.

Link to notice of motion

Councillors on Gloucestershire County Council repeated their opposition to fracking and called for a review of government policy on individual payments to people in fracking areas.

A motion put to a meeting of the full council was approved by 22 votes to nil but all 26 members of the ruling Conservative Group abstained.