Protest at Preston New Road on 20 February 2017. Photo used with the permission of the author

The press regulator has received multiple complaints about an article by the Telegraph referring to arrests at Cuadrilla’s Lancashire fracking site.

The article, about protests at the Preston New Road site, near Blackpool, said:

“There have been a dozen arrests related to verbal death threats and physical assault against workers at Cuadrilla’s site in the last month but some forms of legal protest action are carried out with the police in attendance.” 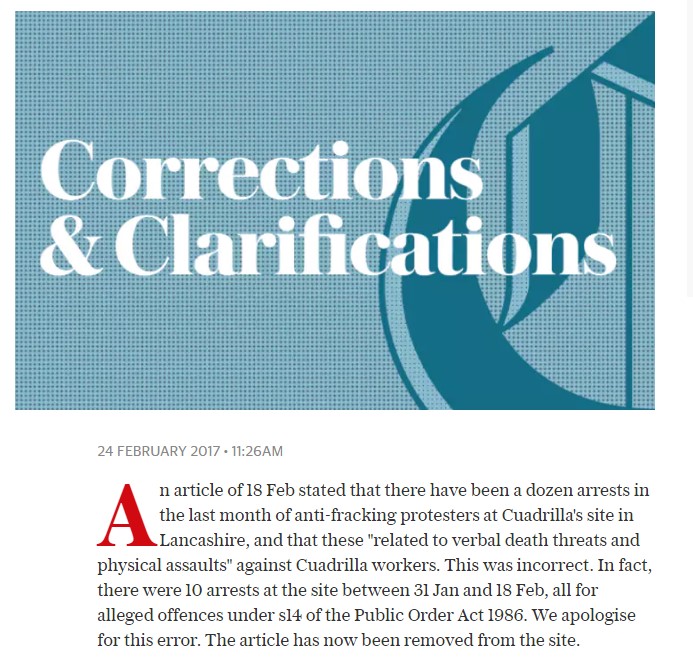 Lancashire Police confirmed to DrillOrDrop there had not been arrests at Preston New Road related to verbal death threats and physical assault.

“In this case, there have been 14 complaints, predominantly under clause 1 of the Editors’ Code”

Clause 1 of the code covers accuracy and requires the press not to publish inaccurate, misleading or distorted information. Where this happens, inaccurate statements must be corrected promptly and a fair opportunity should be given to reply.

The Telegraph told DrillOrDrop that the source of its quote was Cuadrilla’s Chief Executive, Francis Egan.

“There had been approx. a dozen arrests made in connection with protests at or near our site in Lancashire to date.  That is well documented and Francis confirmed that.

“Regarding the “verbal abuse and physical violence” and threats received I can also confirm these are all taken seriously and have been passed to the Police to investigate and take statements.”

Lancashire Police had previously said it was investigating allegations of threats.

A spokesperson said the force was not keeping a running total of arrests outside the Preston New Road site. But data from sources, including the Fylde Police Facebook page and people arrested, suggests that up to the date of the Telegraph article there had been 13 arrests and one report for summons.

Of the arrests, at least 10 were for alleged offences under Section 14 of the Public Order Act (1986).

This legislation allows conditions to be imposed on a “public assembly” – defined as a gathering of two or more people in a public place. Conditions can restrict the place, duration and numbers of people allowed at a gathering and can require people to stand in a “protest pen”.

There was also one arrest under section 241 of the Trades Union and Labour Relations (Consolidation) Act 1992. Section 241 deals with “intimidation or annoyance by violence or otherwise”. An offence is committed if a person uses violence to another, intimidates, persistently follows, hides tools, clothes or property, or watches or besets a home or workplace.

“Frack Free Lancashire were dismayed to read such unfounded and inflammatory claims being made by a respected national newspaper. There have been arrests made but Lancashire police have confirmed that none were “related to verbal death threats and physical assault against workers at Cuadrilla’s site”.

“The Daily Telegraph needs to issue a full retraction and apology to the countless local people who have stood outside in all weathers exercising their right to legitimate and peaceful protest against this invasion by Cuadrilla.  If the claims were originally made by Cuadrilla themselves, as the Daily Telegraph has claimed, then they need to provide evidence of who said it, and when, as they are very serious and defamatory allegations.”

DrillOrDrop invited the Telegraph Media Group to comment on the complaints to IPSO. This post will be updated with any response.

Updated 24/2/2017 to include that the Telegraph had apologised and the article had been removed from the website.