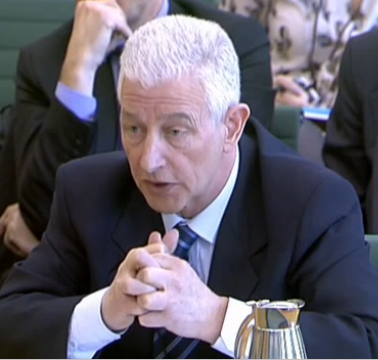 Opponents of plans by Third Energy to frack a well in North Yorkshire have criticised remarks by operations director, John Dewar, made in an interview with the Press Association.

Mr Dewar (pictured right) said he had an “open door” to anyone who had “genuine concerns”. He said:

But he said of protesters:

“If they’re coming just to cause disruption, my message to them is that we will still go ahead. Please go away. We respect their right to protest but they should respect our right to operate.”

Sue Gough (pictured left), who lives half a mile from the KM8 well which Kirby Misperton plans to frack, said:

“We are not going anywhere. It is Third Energy that should go away and leave us alone”.

In the interview, Mr Dewar said Third Energy had drilled the KM8 well without “causing any disruption”. He said:

“How dare John Dewar say they have not caused any disruption. He visited a lady who was kept awake all night by the 24/7 drilling and promised double glazing and a job for her husband – this is all on the public record of the planning committee meeting.

“The Tory county councillors [on North Yorkshire County Council] who pushed this through should hang their heads in shame at what they are putting our community through.”

“John Dewar will only discuss KM8 but we see the bigger picture – this is the start of fracking ‘on an industrial scale’ as promised last year by Ineos. Our holiday cottage business, Flamingoland, Castle Howard and all the other tourist businesses in this area will all be affected by that.”

“We wouldn’t have had approval from the Environment Agency, the Government and North Yorkshire County Council were we not able to conduct this operation safely.,”.

“So I have absolutely 100% confidence there will not be any contamination issues whatsoever.”

He described the well at Kirby Misperton as:

“The most heavily monitored piece of real estate in the UK.”

The site of Third Energy’s KM8 well at Kirby Misperton

He said Third Energy had done 13 baseline studies of the site and surrounding area including noise, light, seismicity, water and soil. Monitoring would continue during and after the operation to prove there had been no impact.

But Ian Conlan, of Frack Free Ryedale, said there had been no baseline of the health of local residents. This is despite a recommendation by a meeting of North Yorkshire County Council in January 2016, which said detailed information should be collected about the health of local of local people before fracking started. More details

Ian Conlon asked if people became ill whether Third Energy would deny that this was caused by its operations.

“The fracking companies are always keen to keep the debate focused on individual wells, when we are already aware that the industry intends to apply for multiple sites across the country.

“With hundreds of locations under threat by fracking licences, the debate isn’t about Third Energy’s ‘little cute’ test well, the debate is about the frackers’ plans for the heavy industrialisation of our communities into the future.”