The latest findings from the government survey of attitudes to fracking in the UK shows dwindling support for the second quarter running.

The results, published this morning, has support (rounded figure) at 13%, the lowest level since the question was first asked. This is more than 3 points down on the previous low of 16% in the survey carried out in the summer of this year.

Opposition to fracking was at record levels of 36%, (rounded figure)  up from the previous high of 33%.

The gap between opposition and support is again the largest so far recorded, increased from 17%, in the previous survey.

The survey was carried out in September and October 2017, after Third Energy started work at its fracking site at Kirby Misperton in North Yorkshire.

“The government is blocking its ears to the rising voices asking them to stop backing fracking, but ordinary people are making that increasingly difficult. The Conservative manifesto said fracking would only continue with public support, but their own opinion polls show support for fracking is at a record-low, with nearly three times as many people opposing it as supporting it.

“With fracking now banned or blocked in Northern Ireland, Scotland and Wales, the Westminster government is isolated. Their own plans show that fracked gas is an irrelevance for UK energy security. Greenpeace is standing with all the brave and dedicated local people who will continue to protest peacefully until ministers realise they would do better to ditch fracking and focus on clean, affordable and popular offshore wind, solar and tidal power instead.”

“Again, the government has asked the public what they think, and again, they don’t want fracking – the tiny support fracking does have is now at a record low. This survey comes at a critical time because the Secretary of State, Greg Clark, is deciding if he should grant the final permission to frack in England.

“Now, as Mr Clark considers that decision in light of the highest recorded levels of public opposition, he can still decide to stop fracking.”

“The stats clearly show that the majority of people in the UK are in the ‘don’t know’ category, or undecided on the process. This is why it is more important than ever to continue our work with local communities to dispel the myths being promulgated by our opponents. The need for a homegrown source of gas to reduce our import dependency both on economic and environmental grounds should be the clear focus of the UK’s attention.”

According to the survey, strong support for fracking has fallen to 1%, down from 2% in the previous survey.

Strong opposition is up one percentage point to 14%.

Participants who said they neither supported nor opposed fracking remained the largest proportion of the survey and unchanged at 48% since this time last year.. 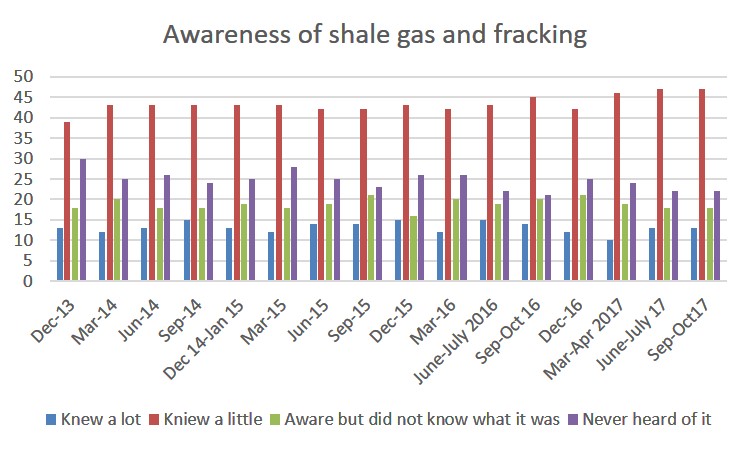 The most frequently given reasons for supporting fracking were:  the need to
use all available energy sources (32%), being good for local jobs and investment (28%), potentially resulting in cheaper energy bills (26%), and to reduce dependence on other countries for the UK’s energy supply (24%) 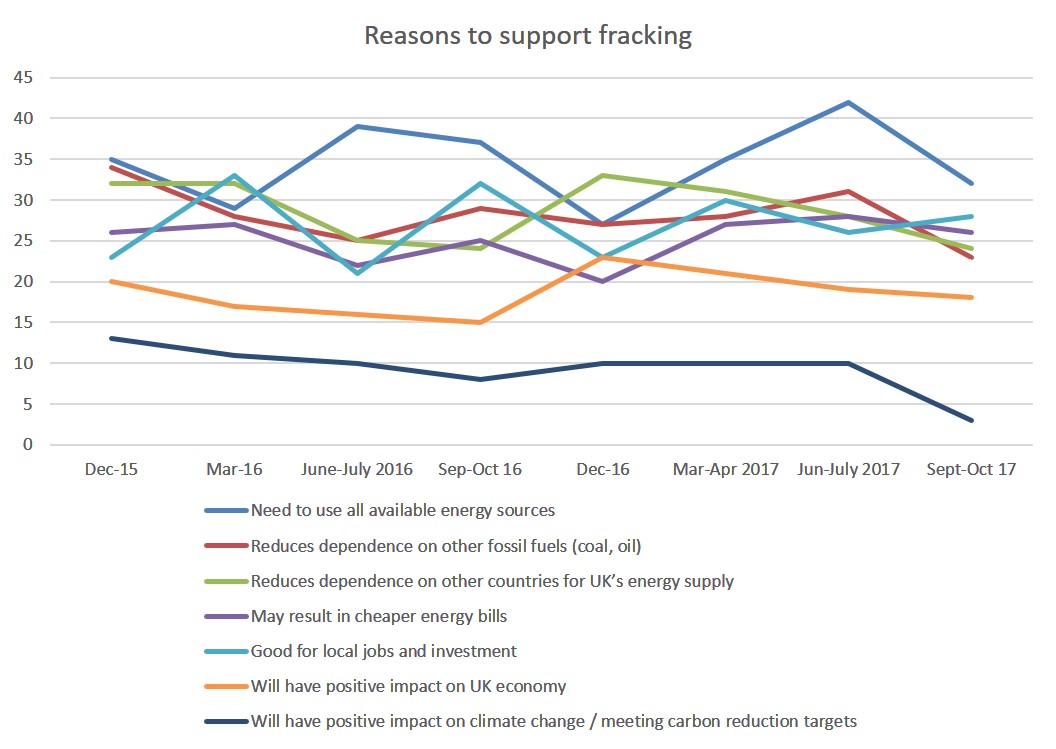 The most frequently given reason for opposing fracking was the loss or destruction of the natural environment (64%). Other frequent reasons were too much risk and uncertainty (30%),  the risk of contamination to water supplies (28%), that it is
generally not a safe process (25%), and that there is a risk of earthquakes (23%).

The Wave 23 survey for the Department of Business, Energy and Industrial Strategy  carried out 2,105  face-to-face interviews in homes among a representative sample of UK adults, aged 16+. The interviews were conducted between 27 September 2017 to 1 October 2017 on the Kantar TNS Omnibus, which uses a random location quota sampling method. The questionnaire was designed by BEIS and Kantar Public drawing on a number of questions from previous surveys.