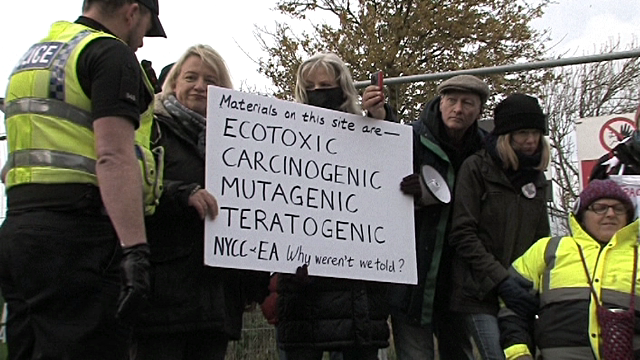 The shale gas company, INEOS, has said some products which may be used at a proposed exploration site could cause cancer or birth defects if “permitted to escape”. They could also lead to mutations and were toxic to plants and animals.

Other items were corrosive, flammable or could cause serious damage to eyes, the company said.

The list of substances and their hazardous properties was included in a statement submitted to the High Court for a secret hearing in July when INEOS sought an injunction against anti-fracking protesters.

The statement was signed by Tom Pickering, the company’s Operations Director, and was used by INEOS in support of its case for the injunction preventing interference with its shale gas activities.

After a request by DrillOrDrop, the court released the document.

The witness statement included a table of seven possible chemicals and products which may be used at Bramleymoor Lane, a proposed shale gas exploration site on the edge of the village of Marsh Lane in north east Derbyshire. INEOS proposes to drill a vertical coring well at the site but not to carry out fracking.

The table gave details of the potential use of the products, their likely volumes and “the possible hazards to humans if such chemicals are permitted to escape”. 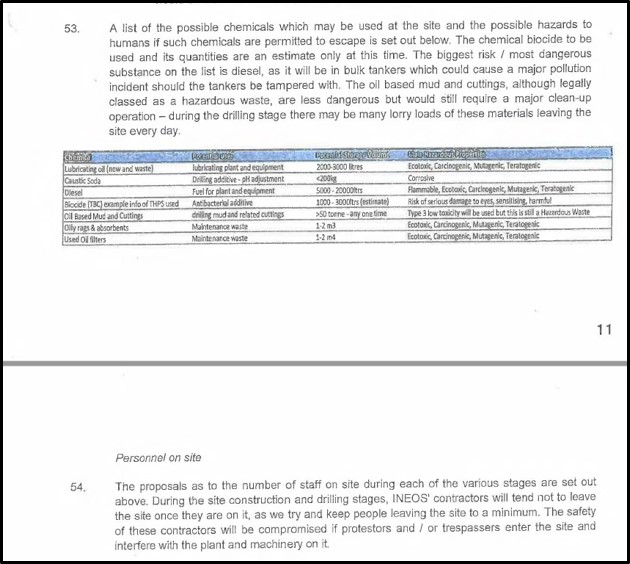 DrillOrDrop has been unable to find references to any of the products’ hazardous properties in publicly-available documents from INEOS about Bramleymoor Lane.

What INEOS told the court

The main hazardous properties for all these items were listed by INEOS as: ecotoxic (harmful to plants, animals and the environment); carcinogenic (cancer causing); mutagenic (increasing the frequency of mutations) and teratogenic (substances that can disturb the development of an embryo or fetus or cause birth defects). Diesel was also described as flammable.

Other products and chemicals in the table were: caustic soda, which was listed as corrosive, and biocide, which was said to have a “risk of serious damage to eyes, sensitising, harmful”. 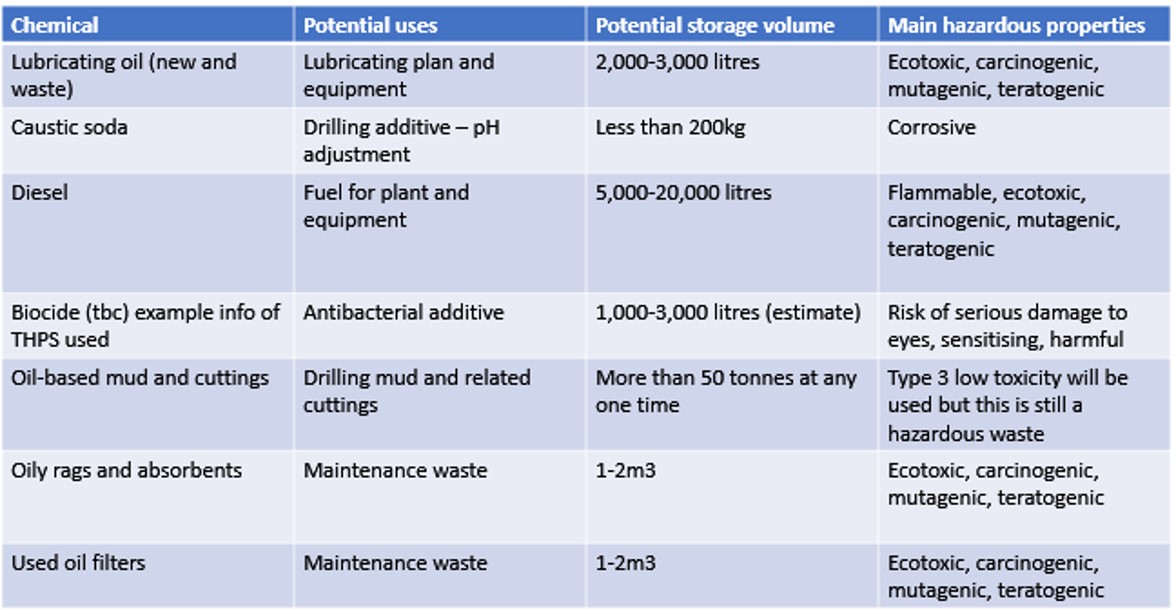 Redrawn table of possible chemicals and substances that could be used at Bramleymoor Lane and their main hazardous properties. Source: Witness statement by Tom Pickering

“The biggest risk/most dangerous substance on the list is diesel, as it will be in bulk tankers which could cause a major pollution incident should the tankers be tampered with.

“The oil based mud and cuttings, although legally classed as a hazardous waste, are less dangerous but would still require a major clean-up operation – during the drilling stage there may be many lorry loads of these materials leaving the site every day.” 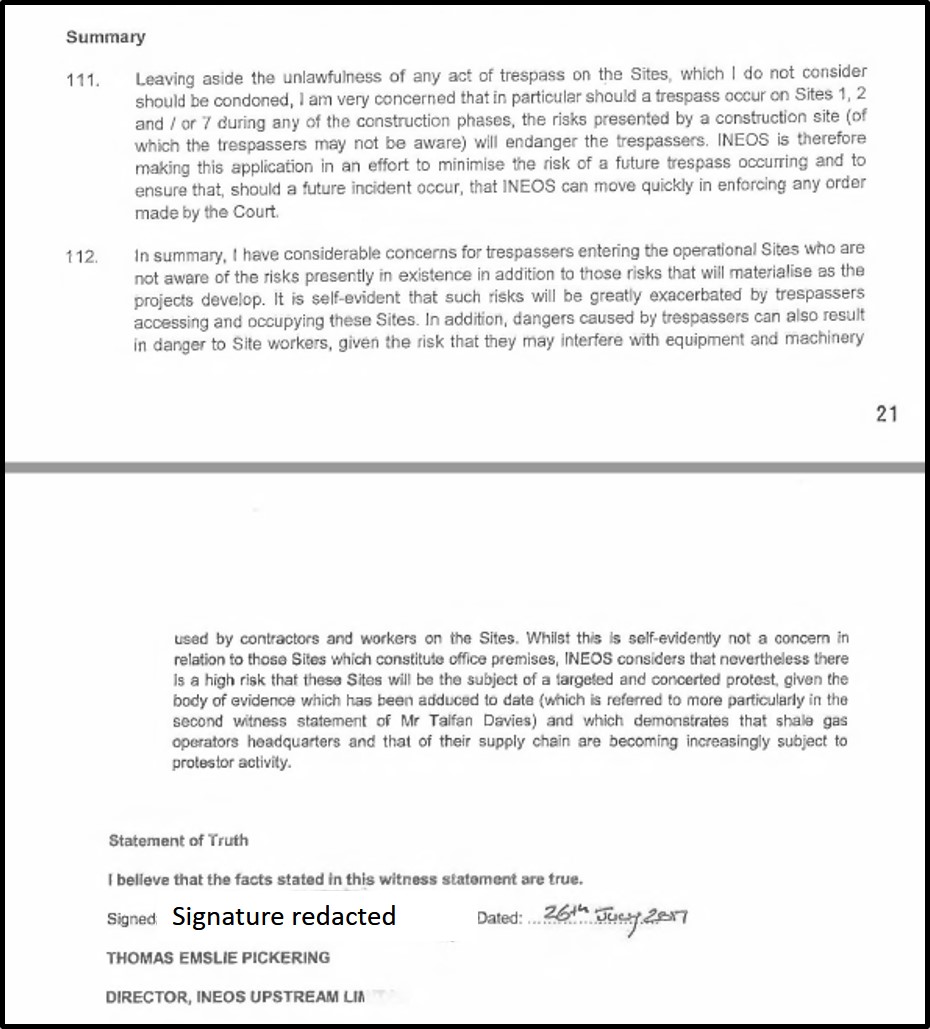 Mr Pickering said in his witness statement that he was concerned about risks of trespass at Bramleymoor Lane and two other potential sites during the construction phases.

“INEOS is therefore making this application [for an injunction] in an effort to minimise the risk of a future trespass occurring and to ensure that, should a future incident occur, that INEOS can move quickly in enforcing any order made by the Court.”

“I have considerable concerns for trespassers entering the operational Sites who are not aware of the risks presently in existence in addition to those risks that will materialise as the projects develop.

“It is self-evidence that such risks will be greatly exacerbated by trespassers accessing and occupying these sites.

“In addition, dangers caused by trespassers can also result in dangers to Site workers, given the risk that they may interfere with equipment and machinery used by contractors and workers on the sites.”

What INEOS told the public 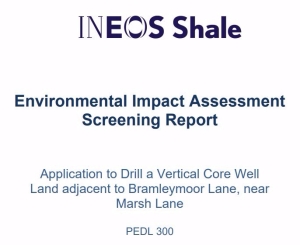 In Jan 2017, the company submitted an environmental impact assessment screening report to Derbyshire County Council as the first stage of the planning application process. Only one of the seven items in the witness statement– oil-based mud and cuttings – was mentioned in the screening report. The report did not mention the hazardous properties or any risk from protesters or trespassers.

An exhibition about the Bramleymoor proposals, held in April 2017, described how INEOS would protect the environment at the site. It said drilling muds and fuel for the rig and generators would be stored in double-skinned steel tanks. Drip trays would be provided under refuelling points and standing machinery. But there was no mention of any hazardous materials held at the site, any hazardous properties or the impact on human health.

In May 2017, INEOS applied to the Environment Agency for a standard rules mining waste permit for Bramleymoor Lane. This identified spent drilling mud and drill cuttings as extractive waste that would be covered by the permit. But there is no reference to their hazardous properties or the risk of trespass or protest.

The permit does not class as mining waste any of the other substances mentioned in the witness statement (lubricating oil, diesel, biocide, oily rags and absorbents and used oil filters) so they are not mentioned in the application. 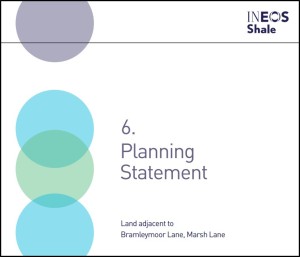 The environmental report mentioned only diesel and drilling mud/cuttings from the list in the witness statement. It did not describe their hazardous properties. The planning statement mentioned diesel but only in relation to mobile generators and with no reference to any hazards. Neither document mentioned the risk of protest or trespass.

The environmental report said “embedded mitigation measures” would prevent groundwater pollution from spillages and the handling/management of drilling fluids and cuttings.

“This development will not result in any effects which would undermine human health”.

“Pollution control and potential health impacts can be addressed satisfactorily through planning conditions and other regulatory regimes.”

The traffic management plan for Bramleymoor Lane, an appendix to the environmental statement, did not mention risks of transporting substances with the hazardous properties referred to in the witness statement. It also did not mention the risk of protest.

Why was the injunction needed? 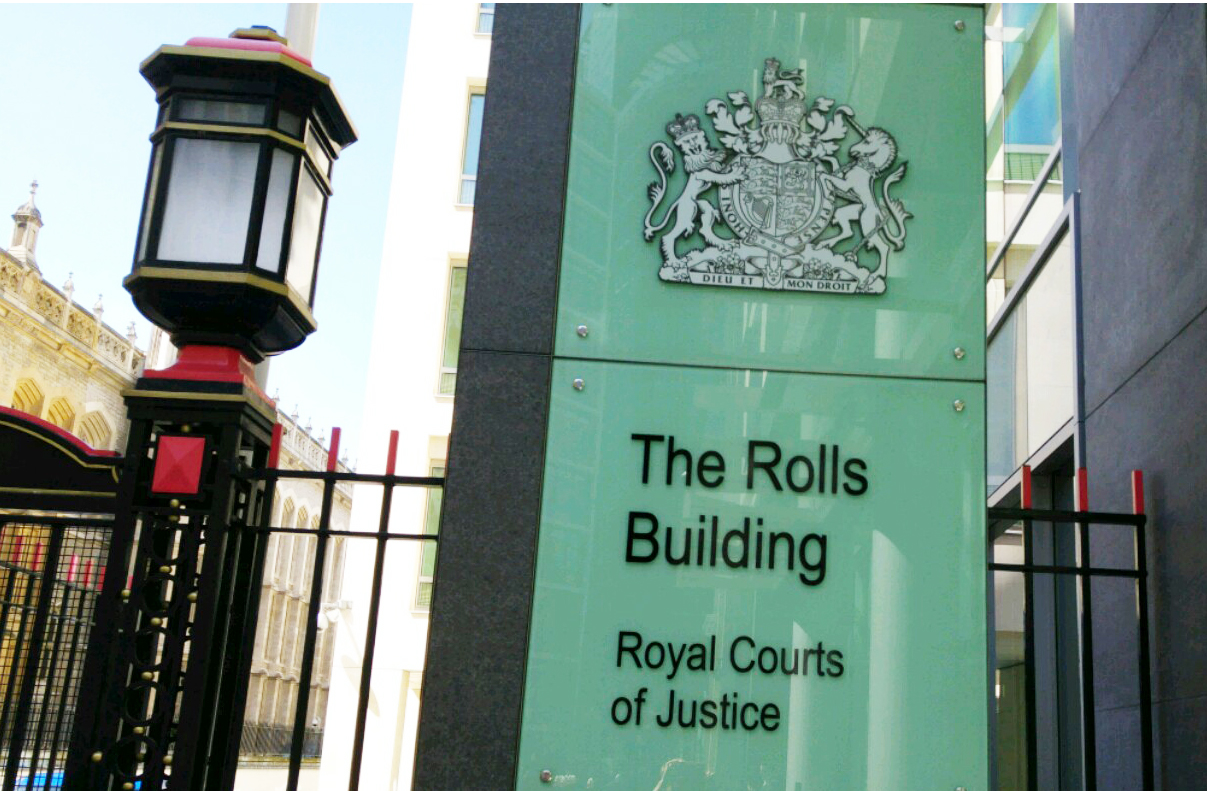 The company had told the High Court at a public hearing in October that it faced “a real and imminent threat” of being targeted by unlawful protests.

Lawyers for two campaigners who challenged the injunction had argued that this risk had been overstated. They described the evidence presented by the company as “flimsy” and “exaggerated, tendentious and selective”.

DrillOrDrop asked INEOS to comment on the hazards identified in the witness statement, though not in public material. We also asked why the injunction was necessary to ensure the effectiveness of the company’s mitigation measures proposed to the Environment Agency and Derbyshire County Council.

“INEOS Shale is being targeted by hardcore activists and we have a duty to ensure our operations remain safe despite their unlawful actions. We do not apologise for this – it is simply the responsible thing to do. And it would be irresponsible if anyone engaged in scaremongering or took these issues out of context.

“INEOS is one of the UK’s largest manufacturing companies and safety is always the highest priority. We have the expertise to safely carry out all of our activities. We adhere to all UK regulations and ensure that our day-to-day activities are carried out in the proper manner.”

On the transport of hazardous substances and the traffic management plan, INEOS said:

“The safe transportation and storage of fuels and chemicals is a crucial part of this planning. This is no different to many other businesses and this type of transportation happens millions of times every day across the UK, in industries as diverse as supermarkets, construction and petrol stations.”

“Tom Pickering’s Statement of Truth suggests that INEOS, despite adherence to regulations and ‘best practice’, cannot keep their well sites safe and secure.

“These authoritative statements of the fact, from a Director of INEOS Upstream, suggest that the company, and all other companies involved in shale gas exploration in the UK, have withheld the whole truth about their operations.

“They also suggest that the shale gas industry harbours concerns about the safety and security offered by current regulations. The statements also call into question the reliability of traffic management plans to ensure the safety of transport routes with consequent risk to residents and all road users.”