Third Energy has been waiting since November 2017 for final consent from Mr Clark to carry out hydraulic fracturing at the site.

FFR said it was concerned about the age of the pipeline intended to take fracked gas to be burned at Knapton power station and whether the gas would contain hydrogen sulphide (H2S).

H2S is a highly flammable and toxic gas which can cause breathing and heart problems at high concentrations.

FFR said fracking should not go ahead at KM8 without official monitoring of the pipeline. It also said that before the operation got underway Third Energy should be required to test the rocks to be fracked for H2S.

If consent were granted without these conditions in place, the group said it would seek a judicial review and an injunction.

Through its solicitor, Leigh Day, FFR gave the Secretary of State until 5pm on Wednesday 24 January 2018 to reply.

A spokesperson for the Department of Business, Energy and Industrial Strategy said:

“We have received the letter and will respond in due course.”

Third Energy said all the company’s infrastructure in North Yorkshire was permitted, regulated and tested regularly. It said it was confident there was no “incremental risk” to the pipeline from transporting KM8 gas (see full statement at the end of this article).

Third Energy has said that it expected gas from KM8 would be almost pure methane, with no H2S.

But FFR’s letter to Mr Clark said there was evidence of H2S in the Kirby Misperton area.

It said a leak in 2014 in the Pickering pipeline confirmed the release of sour gas (any gas containing significant amounts of H2S). Monitoring at KM8 in October also detected H2S, the letter said.

“It is entirely possible that fracked gas from KM8 will contain higher concentrations of H2S and have a different composition to the gas which the KM8 pipeline currently conveys.

“Samples that Third Energy has relied on from previous vertical tests are not wholly representative and cannot rule out that there could be significant material volumes as high as 90% of sour gas pockets within the horizontal rock formation, which fracking could potentially disturb.”

Without a proper test of any horizontal H2S deposits, this poses a major risk to public health, the letter said.

FFR said Third Energy was required to monitor for H2S at the KM8 site under a planning condition. But there appeared to be no protection along the pipeline.

The Health and Safety Executive had said the KM8 pipeline was designed to operate with the current composition of gas and that any fracked gas would be “within design parameter of both the well and the pipeline”.

“It does not follow and cannot be assumed that the KM8 pipeline will be fit for purpose given the potentially different composition and the potential (as recognised in the planning permission) for H2S to be present.”

Age of the pipeline

FFR said it was concerned about the age of the pipeline and the future impact on it of any fracked gas containing hydrogen sulphide, which it said accelerated corrosion.

The group told Mr Clark the pipeline, constructed in 1994, was designed to transport H2S at a maximum concentration of 1,000 parts per million for 15 years.

It said Third Energy extended the pipeline’s life in 2010 for 14 years. This was based on a desk top study which assumed the system had a robust fully-recorded maintenance condition report. Since then, Third Energy has said it intended to use the pipeline for fracked gas for 20 years. The letter said:

“If fracking commences in 2018, then the expected production of gas potentially containing H2S exceeds the pipeline’s initial design life by 29 years, approximately 200% over its designed operating period.”

“Without any analysis of the H2S composition of the shale gas fracked at the horizontal levels, it is not known whether or not the maximum levels for H2S level or corrosion will be exceeded, nor are there in place any measures to assess and deal with that.” 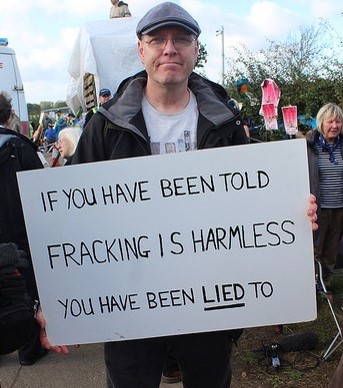 This meant, FFR said in its letter, that decision-makers should apply the precautionary principle – a responsibility to protect the public from harm when there is a plausible risk.

It quoted a case brought by Friends of the Earth last year which ruled that to comply with the precautionary principle decision-makers needed positive evidence to show no harm, rather than just an absence of evidence of harm.

In the Third Energy case, FFR argued that a failure to take into account or make reasonable inquiries would be a breach of the precautionary principle and fracking regulations.

The group said it would be potentially unlawful for the Secretary of State to grant hydraulic fracturing consent at the KM8 well without requiring Third Energy to test for deposits of H2S in the horizontal rock formations and for monitoring of the KM8 pipeline.

“It is simply not acceptable for the Secretary of State to allow Third Energy to proceed with fracking at Kirby Misperton. Third Energy intend to use a pipeline which is no longer fit for purpose to carry unknown levels of potentially lethal and highly toxic H2S gas through our communities – this cannot be allowed to happen.”

Campaigner, Sue Gough, who lives a mile from the proposed well-site, said:

“It beggars belief that Third Energy think using a pipeline that is over 23 years old to transport such dangerous materials is acceptable – they are playing Russian roulette with people’s lives.”

“All of Third Energy’s infrastructure in North Yorkshire is permitted and regulated by North Yorkshire County Council, the Environment Agency, Oil and Gas Authority and the Health and Safety Executive. All equipment must be, and is, tested regularly for safety and environmental compliance in accordance with the regulations.

“Third Energy regularly inspects its gas pipeline at ground level and from the air for structural integrity and potential impacts on surrounding ecology. The line is also inspected internally on a planned frequency using approved techniques designed to assess pipeline integrity.

“All of our pipelines are fully compliant with the regulations and are designed to operate safely with the gas currently under production within the Vale of Pickering.

“We have undertaken extensive sampling and analysis of the natural gas which will be produced from the KM-8 well, following a successful fracture stimulation programme, and it is clear from the analysis that this gas contains minimal levels of H2S and is almost pure methane.

“As the existing facilities were designed to process and transport gas which contains H2S, we are confident there is no incremental risk associated with transporting KM-8 gas to the Knapton Generating Station in order to produce electricity.”