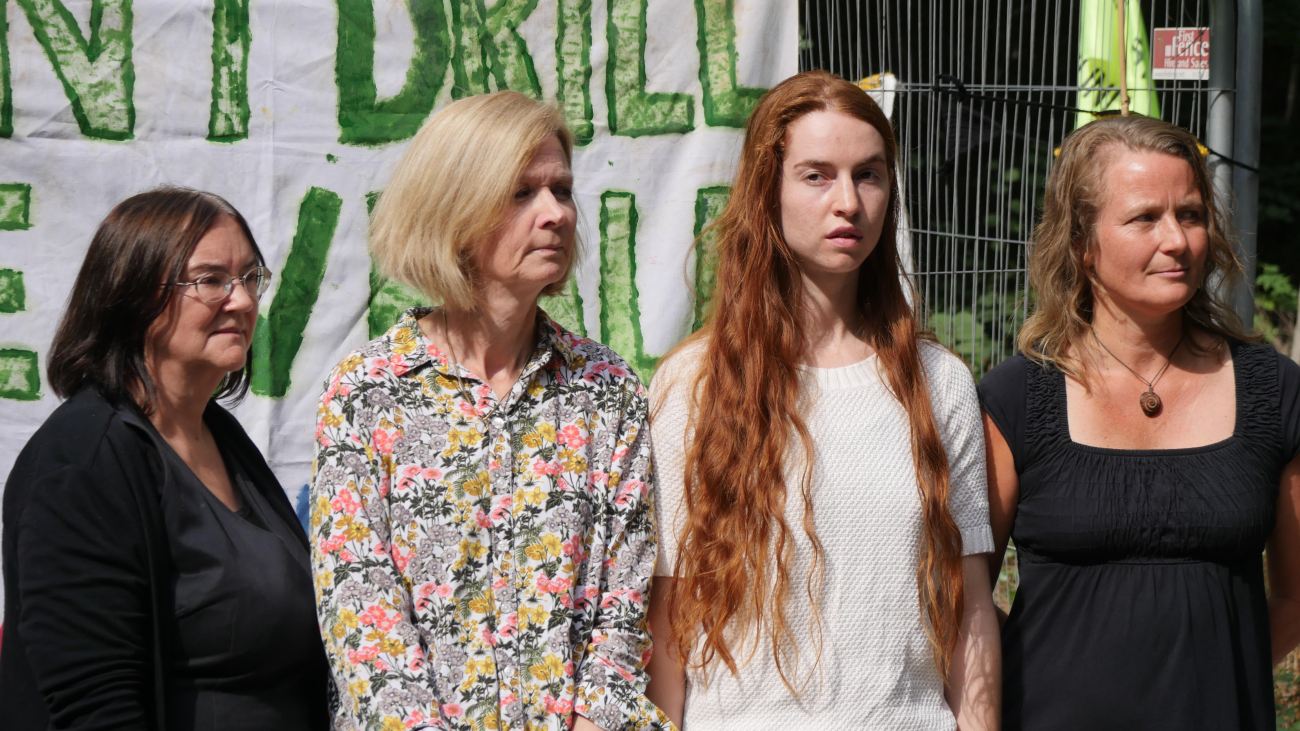 Four of the six women who challenged the UKOG injunction outside the Horse Hill site today. Photo: Jon O’Houston, 3 September 2018

The deputy judge hearing the UKOG injunction case has refused leave to appeal. A statement from the court sent on 4 September 2018 said:

“The Deputy Judge has now had the opportunity to consider the above two applications and he has decided that both applications should be refused.

A statement from the six women who challenged the injunction said:

We are considering all of our options with our lawyers, bearing in mind that it is open to us to seek permission to appeal directly to the Court of Appeal

Campaigners have lodged an appeal against the injunction granted this morning to an oil company outlawing direct action protests at exploration sites. (DrillOrDrop report)

The High Court curtailed a wide-ranging order sought by UK Oil & Gas for two sites in Sussex and Surrey.

But it granted an injunction to outlaw trespass, obstructing entrances and the highway, slow walking, targeting contractors and locking on or climbing on to vehicles.

Mr Justice Male said he would give his decision within 24 hours and his reasons within seven days.

If he rules against an appeal, the challengers can apply directly to the Court of Appeal.

It looks likely that if approved, the appeal would be dealt with at the same time as one against an injunction granted to Ineos. That is due to be heard at the Court of Appeal in March 2019 and to cover similar issues.

Stephanie Harrison, for the six women who live near UKOG sites in Sussex and Surrey, said they would challenge the injunction on the following grounds:

“We are seeking leave to appeal on some of the remaining aspects of the injunction, including persons unknown and the curtailment of protest through the banning of slow walking which has been found to be lawful in other circumstances.

“We also have a wider concern beyond this injunction about the direction of travel of the growing use of injunction against free speech by the oil and gas industry.

“There is a significant threat to the right of democratic protest and right to free speech.”