The expected planning application for four production wells at the Horse Hill oil site near Gatwick has been published.

The site operator, Horse Hill Developments Limited, is seeking permission to produce what could be more than 500 tonnes of oil a day, over a period of 20 years.

An outline of the proposal was submitted to planners in September DrillOrDrop report. The full application, comprising 95 documents, has now been submitted to Surrey County Council. A decision is currently not expected before February 2019. A public consultation will be held on the application but there are no details yet.

As well as four new wells, the application seeks to:

This is the third major application sought for the Horse Hill site. The original exploration well (HH-1) was approved in 2012 and drilled in 2014. It is currently undergoing long-term flow testing. A second application, granted in 2017, allowed Horse Hill Developments Ltd (HHDL) to drill another appraisal well (HH-2) and a sidetrack (HH-1z).

If approved, the scheme outlined in the new planning application would bring the number of oil wells on the site to six. Two wells would target the Portland sandstone and four the Kimmeridge Limestone. The scheme would also increase the size of the site from 2.08ha to approximately 2.8ha.

The application (reference 2018/0152) seeks permission for 25 years to allow for five stages of work: construction; drilling; 20 years of production; plugging and abandonment; and site restoration.

It estimates that all six wells would be producing by the end of the second year of the permission. 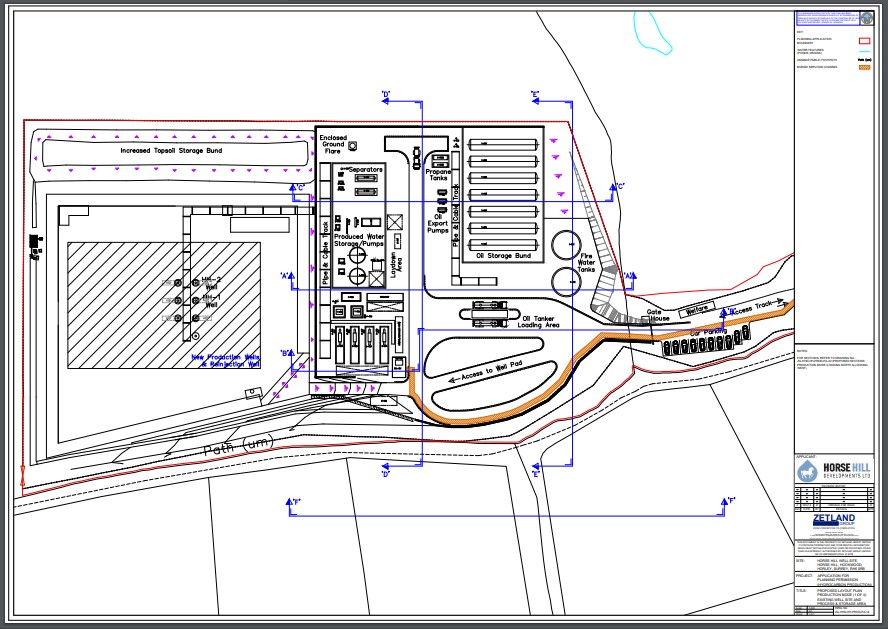 HHDL said the proposal would have “no significant adverse impacts” on people or the environment.

According to the application, noise levels would not be significant, traffic to the site would result in a “negligible” rise in road noise and there would be “no residual adverse effects experienced by recreational users in the surrounding countryside”. It added that lighting effects, the impact on traffic and effects on hydrology would not be significant.

HHDL said “when read as a whole, the proposed development is in compliance” with policies in the Surrey Minerals Plan. It also complied with the Reigate and Banstead Core Strategy and UK government policy expressed in the National Planning Policy Framework.

The application described the proposed scheme as “sustainable development” and said it would provide economic benefits, and contribute to security of supply and a thriving UK oil and gas sector.

HHDL said retaining the site was the best environmental option and the most sustainable solution because it minimised the need for extra land and the use of natural resources.

“The impact assessments and environmental reports submitted in association with the planning application find the effects of the proposed development in this location will not be significant demonstrating that the Site can acceptably accommodate further hydrocarbon development.”