The document, prepared by civil servants for 10 Downing Street in 2016, was disclosed to Greenpeace journalists after a 22-month Freedom of Information campaign.

It is heavily redacted. 34 of the 46 pages are completely blacked out

Only the front page has no redactions and this says:

“No part of this report or its appendices is to be released under the Freedom of Information Act”. 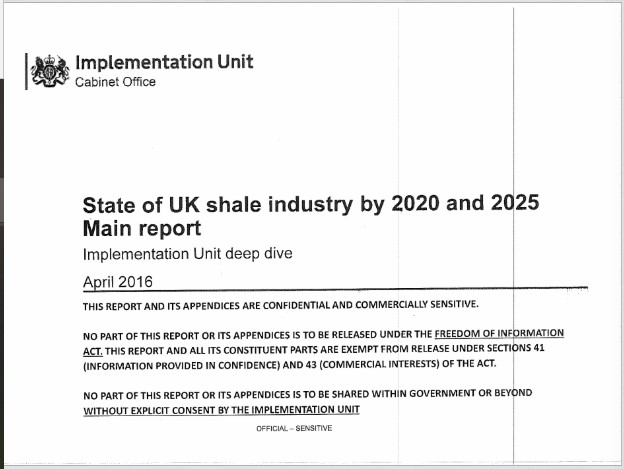 But the document does reveal industry frustration at what was seen as barriers to shale gas. It is also clear that government was willing to take many steps to speed up fracking.

Based on interviews with 28 representatives of industry and government, the report concluded that progress had so far been slow.

“Industry and government agree that the root cause for this is the current low public acceptance of shale, which drives a set of more practical barriers”.

It said public opposition was driven by:

“concerns re: local quality of life and safety, environmental protection, crowding out of renewables.”

The document, prepared by the Implementation Unit in the Cabinet Office, looked at how these barriers could be overcome.

Most of the recommendations are redacted. But those that remain indicate that government saw public acceptance as a communications issue.

It acknowledged that “public acceptability concerns may remain at least until several wells fracked w/out [without] incident.”

But it said the then Department of Energy and Climate Change (DECC) was:

This included the “development of pro-shale national/regional narrative” and the appointment of good communicators as “figureheads” and “shale champions”.

The report referred to “4 messages that industry consistently suggested should be included in HMGs [government’s] longer-term national comms efforts”. The messages themselves were redacted.

Regulators were recommended to develop “community-friendly” narratives of their role.

The Environment Agency (EA) and Health and Safety Executive in particular were advised:

“As per industry input, focus on one single coherent narrative that (i) addresses local concerns and (ii) explains how jointly regulators can offer end-to-end coverage of environment/health and safety concerns.”

At the time of the report, the government’s own survey of public attitudes to shale gas put opposition to fracking at 31%. Since then, opposition has risen to a record high of 44% in the most recent survey (September 2019).

“Operators highlight that the most significant barriers by far are the long decision timelines and uncertainty experienced in local planning system.”

If the timetables continued, the authors predicted that by mid-2020, the UK shale industry would still be “firmly in the exploration and appraisal phase”.

They estimated 5-20 horizontal wells could be fracked but “with a realistic expectation being significantly closer to 5 than 20”.

This was acknowledged to be “significantly less optimistic” than industry estimates of 30+ for the mid 2020s. In 2013, Ernst and Young estimated 4,000 horizontal wells would be drilled by 2032.

“The development of the UK shale industry over the next 5-10 years is subject to great uncertainty – most importantly because the viability of the UK shale reserves is not yet proven.”

It said the viability of UK shale could, in principle, be proven quickly, and the UK industry could take off quickly. But it also suggested that the industry could close down quickly if early sites were unsuccessful.

“Developments in next 5-10 are therefore crucial to establish long-term viability of the industry.”

Nearly four years after the report was published little has changed.

Only Cuadrilla’s two wells have been fracked. IGas has drilled two shale gas wells in Nottinghamshire, one of which has already been abandoned and restored. Ineos has secure planning permission for shale gas wells in Derbyshire and South Yorkshire but has not done any work at the sites.

In November, the government announced a moratorium on fracking because of concerns about induced seismicity.

According to the report:

“Key operators and industry experts have been clear that industry will only bring forward large developments if certain conditions are met.”

Planning times need to be shorted and the process needs to be more predictable, the report said.

“unless long observed planning timelines and perceived uncertainty can be addressed, the UK shale industry will not take-off – even once viability of geology is proven”.

The recommendations included reviews of how to speed up the decision process without risking legal action.

The report referred to proposals, announced in 2018, to bring shale gas into the national planning regime.

But further “in-depth consideration” was needed, it said. The industry was “less aligned than anticipated” to the idea. The risk of legal challenges to decisions made by a secretary of state needed to be better understood, it added. The idea was finally dropped in November 2019 after widespread opposition.

The report also has evidence that government was concerned about long-term liabilities for shale gas sites.

It recommended accelerating planned work by DECC on “developing options for the settlement of shale long-term liabilities to prevent this from becoming a potential source of delays in the local planning system in future”.

In response to the report, Greenpeace UK’s head of politics, Rebecca Newsom, said:

“It’s clear that previous Conservative administrations bent over backwards to help the fracking industry bulldoze its way into the British countryside.

“People would feel much more confident about the Conservative’s [current] pledge on fracking if they used the overwhelming evidence of its unacceptable risks to people and our environment to introduce a permanent ban, and put this industry to bed once and for all.

“Looking at this black wall of redacted pages, people will be wondering why there’s so little the government is willing to reveal about fracking and so much it wants to hide.

“If ministers have really dropped their support for this polluting industry, why not publish this report in full and come clean about what’s been going on behind closed doors for years?”

“No new information of interest”

“This 2016 report reveals no new information of interest. It is true that shale gas development in the UK has progressed at a steady pace, although this is commensurate with the exploratory and highly regulated nature of the industry.

“Since this report was [produced], the first hydraulic fracturing since 2011 has taken place, several sites have been constructed and tested across North Nottinghamshire and multiple planning applications have been submitted for further exploratory work across Derbyshire and Lancashire.

“As with any industry that involves development, our progress has been slowed by the local planning system. This is not a unique problem to shale within the energy sector. Onshore wind and solar have met with comparable delays where applications have been filed.”

Link to Greenpeace article and the redacted version of the report