Staff transporting a drilling rig between oil exploration sites in Sussex did not know the delivery was in breach of planning conditions, a court heard today. 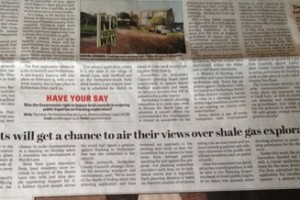 Keep up with the news with DrillOrDrop’s February 2018 digest of headlines about fracking, shale and onshore oil and gas updated daily.

October 2017 saw a tea lady kettled and an 85-year-old dragged across a road during anti-fracking protests. Cuadrilla held its first live web tour of Preston New Road and UKOG was pictured with three bottles of oil from its Broadford Bridge site.  A rig was delivered and briefly […]

Who drilled where in 2017? Data shows another low for UK onshore oil and gas

The number of onshore oil and gas wells drilled in the UK in 2017 was another 50-year low for the industry.

We’ve now reached April in our photo review of 2017.