Drilling is now underway at Biscathorpe, Misson and West Newton – and what will happen this month at Preston New Road and Tinker Lane? Also in February, the inquiry reconvenes into IGas testing plans at Ellesmere Port. 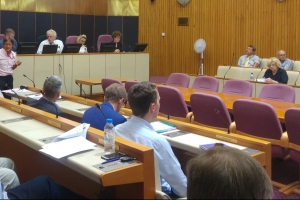 May 2018 sees the continuing inquiry into INEOS shale gas plans in Harthill and the start of the company’s judicial review against the Scottish Government. Keep up with the news with DrillOrDrop’s digest of headlines about fracking, shale and onshore oil and gas updated daily.

April 2018 sees inquiries into Cuadrilla and INEOS shale gas plans and the start of a 13-week campaign against fracking in Lancashire. Keep up with the news with DrillOrDrop’s digest of headlines about fracking, shale and onshore oil and gas updated daily.

UKOG has announced that it drilled a mechanical sidetrack to its exploratory oil well at Broadford Bridge in West Sussex, confirming DrillOrDrop’s report published yesterday. The company made the announcement in a formal RNS statement to investors, 10 days after the 3,000+ft sidetrack was spudded.