Officials have taken the first steps to force IGas to restore its shale gas site at Misson Springs in Nottinghamshire. Correspondence seen by DrillOrDrop confirms that IGas has failed to begun restoration work on time. Because of the lack of progress, Nottinghamshire County Council has now served Restoration […]

The shadow climate secretary, Ed Miliband, on a visit to the shale gas village of Misson in Nottinghamshire today, promised that a Labour government would ban fracking.

The oil and gas industry regulator has said it would consider postponing the abandonment of Cuadrilla’s fracked wells in Lancashire by up to a year. 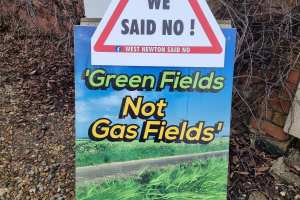 Keep up with February 2022’s news with our digest of daily updated headlines about the business, regulation and campaigns around UK fracking, shale, and onshore oil and gas.

A tree planting scheme on the site of a former oil site in the South Downs National Park has failed.

Plans to produce oil for 20 years near a historic country house in Dorset are still being considered, despite limited progress over the past 18 months.