Yesterday the government published an uncensored report on the impacts of shale gas development on rural areas. The document had first been published 11 months ago with more than 60 sections blanked out. But llast month, the Information Commissioner gave Defra, which commissioned the report 30 days to […]

One of Britain’s biggest trades unions has backed its leadership in favour of fracking for UK shale gas. 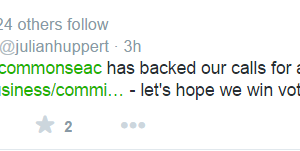 This morning a report by the Environmental Audit Committee of the House of Commons called for a moratorium on fracking because of risks to the climate and the environment. Supporters of a halt to fracking welcomed the report but reaction from the industry has been critical. Onshore Energy Services […]

Our round-up of reaction to this morning’s recommendation by Lancashire County Council planners to reject Cuadrilla’s planning applications for fracking at two sites in the Fylde. Statements from: Cuadrilla Friends of the Earth and Greenpeace Fylde anti-fracking campaign group Industry representatives Government

Lord Chris Smith, the head of the new industry-funded Task Force on Shale Gas, yesterday urged the government to be open about all the information it had on fracking.

Academics, a gas industry representative, a climate change adviser, a peer and a regulator will be giving evidence to the parliamentary inquiry on the environmental risks of fracking. Our report on the inquiry

Who is wining the fracking argument?

Two discussions of the shale industry yesterday revealed very different views on the fight for public acceptance. The All Party Parliamentary Group on Unconventional Oil and Gas, meeting in Westminster, heard claims from government and industry representatives that they were winning the argument over fracking. But speakers at […]

The rate of onshore oil and gas drilling in the UK is “glacially slow”, the organisation representing the fracking industry said yesterday.