Thousands of opponents of fracking were among an estimated 0.5 million+ people who took part marches in more than 150 countries across the world demanding action on climate change. 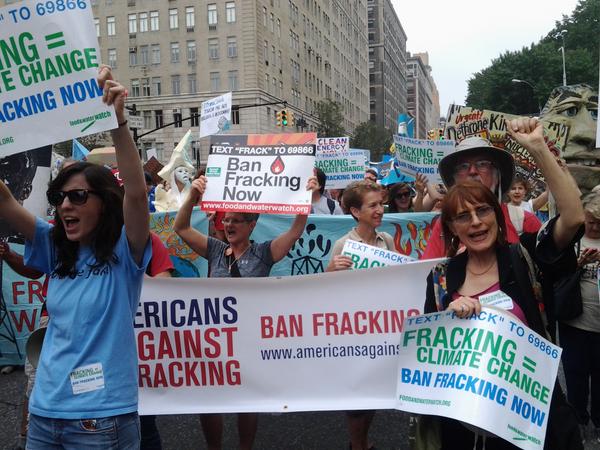 Anti-fracking campaigners at the Peoples’ Climate March in New York

The Guardian reports that the rally in Manchester, held near the Labour Party conference venue, called on the Labour leader, Ed Milliband, to make a manifesto pledge to ban fracking.

Martin Porter, from Frack Free Greater Manchester, told the Salford Star: “Here in the North West of England the key battle against climate change is fracking”. He said opponents of fracking had organised camps, rallies, blockades and petitions but there had been no political debate in the city.

At the march in London, actor Emma Thompson told Greenpeace there had to be a challenge to vested interests that regarded the extraction of fossil fuels as “their rightful inheritance”. She said: “If we don’t change now, it is all over”.

Green Party leader Natalie Bennett told the BBC: “It is really interesting that so many people here weren’t even activists six months ago or involved in politics but more and more people are being energised saying we don’t want fracking in our back garden or anywhere in Britain,”

Friends of the Earth said: “The UK’s environmental credibility has been sinking for years. The Government has been bending over backwards to develop fracking and extract more dirty gas and oil, instead of investing in the UK’s huge renewable power potential and a cleaner future for us all.”

In Chichester, 150-200 people were reported to have gathered for a short rally outside County Hall, including actor Sue Jameson and a contingent from Keep Kirdford and Wisborough Green.

Numbers of participants at some of the different marches