The Environment Agency is investigating what action to take against a Rathlin Energy exploratory drilling site in East Yorkshire as evidence emerges of more breaches of its permit conditions.

DrillOrDrop reported earlier this month that the West Newton hydrocarbon site in Holderness, north of Hull, breached eight permit conditions over the period of three months, between early July and mid-September 2014.

This week, a set of documents released by the Environment Agency to local people revealed that the site breached another six conditions in under four weeks between late-September and mid-October.

Three involved the release of gas from the well head. This had been specifically prohibited by the Environment Agency. But official documents recorded that “on three occasions gas had been vented to atmosphere in breach of [a] permit condition”.

The Environment Agency made the toughest response available to it, recording that it would take enforcement action.

It also ordered enforcement action for another breach of a condition on document management. And issued a warning following a breach for a condition on record-keeping and another on monitoring.

We asked the Environment Agency what enforcement action had been taken, and when, for these breaches. A spokesman said:

“We are still looking into this so it wouldn’t be appropriate for us to make any public comment while our investigation is active”.

We invited Rathlin to respond to the latest evidence. It declined but referred to a statement it issued in response to our previous article. The company said the period coincided with a “settling in period” for new permit requirements, introduced in 2013. Both the regulator and the operator needed to become familiar with the conditions, Rathlin said. The company added that there were unknowns in oil and gas operations and these caused “unanticipated on-site operational challenges” at West Newton.

An update on the company’s website this month (February) said: “On the basis of the lessons learned during the test operations at West Newton, the EA has included some additional pre-operational conditions to be approved prior to commencement of our test operations at Crawberry Hill” [another Rathlin site in East Yorkshire].

The company is currently applying for planning permission for another well at West Newton, its third in East Yorkshire. The deadline for public comments has been extended to 15th March 2015.

The existing West Newton site, known as West Newton A, has a conventional oil and gas well, where fracking has not been used. It first came to national attention on 9th September 2014 when the well was being tested. A release of gas caused a noxious smell and led to complaints from local people.

The Environment Agency recorded a breach of a condition of the site’s permit condition and ordered Rathlin to take action to stop the smell. Our analysis of emails between staff and the Environment Agency, as well as official inspection forms, showed the smell was just one of a series of problems at West Newton between July and mid-September 2014.

The latest release of compliance assessment reports, compiled by the Environment Agency following site inspections, show that permit breaches at the site continued for another month, until at least October 22nd 2014.

On 8th November 2014, Rathlin held an information session for local people about its proposals for West Newton B. One of exhibition boards headed “Fact and Evidence-based consultation” said the company had not vented gas illegally. It also said: “We have remained consistently compliant with all regulations and conditions of consent in everything that we have done”. The full exhibition panels are no longer on Rathlin’s website but can be seen here.

Section from one of Rathlin Energy’s exhibition panels

The first compliance assessment report, or CAR form, dealt with an inspection on 30th September 2014. The inspector examined records for the flare. This had been installed to burn-off gas from the well during testing. Earlier in September, the pressure in the well had been too low on occasions for the flare to burn some waste gases. The release of these unburned gases caused the smell.

On 30th September, the inspector recorded on the CAR form that gas had been sent to the flare for 10 minutes the previous day but “no record of temperature data was available”. The CAR form also recorded “monitoring of gas flare data is a requirement of permit condition 3.5.1”.

This condition requires an operator carry out specific monitoring. For West Newton, this included the flare temperature.

Rathlin had been instructed after a visit on 24th September to make recording the flare temperature part of its Environmental Management System within three days. But six days later the inspector recorded this “had not been put in place”.

The Environment Agency told us it records all non-compliance, regardless of regime or impact. “Repeated C4 breaches would lead to an escalation of enforcement if the company was not rectifying the issue or demonstrating that the permit condition was unnecessary.”

C3 breaches have the potential to cause harm, the Environment Agency told us, and a one-off score of 3 would result in a warning. Multiple or continued C3 breaches would lead to “a ramping up of enforcement action that could result in formal cautions or prosecutions”.

On 30th September, the inspector recorded on the CAR form: “You have been issued with a warning. At present we do not intend to take further enforcement action. This does not preclude us from taking additional enforcement action if further relevant information comes to light or offences continue.”

The CAR form also recorded that two sets of records dealing with waste brine were not available on the site. Rathlin was required to provide copies within 10 days.

The Environment Agency visited West Newton again on 10th October 2014 and recorded no breaches. However the CAR form referred to two dead mice and a vole in a lined ditch surrounding the site. The lining was slippery when wet and the CAR form recorded that the operator had placed netting at five points along the ditch to give any animals that fell in a better chance to climb out. It added:

“The operator is carrying out vermin control on site using rodenticide in bait boxes and that is believed to be contributing to the numbers of small dead mammals found in the open section of the containment ditch.”

According to the CAR forms, the next Environment Agency visit was on 22nd October 2014. The inspector examined data from the well and recorded on the CAR form that this “indicated that on three occasions gas had been vented to atmosphere in breach of section 10.1.4 of the odour management plan and permit condition 3.3.1”.

Condition 3.3.1 states “Emissions from the activities shall be free from odour at levels likely to cause pollution outside the site, as perceived by an authorised office of the Environment Agency”.

The CAR form reported that the breaches took place on the morning of Sunday 5th October and the evenings of Wednesday 15th and Friday 17th October. Emails from the Environment Agency show there were complaints about a smell coming from the site on two of those days (5th and 15th October).

Rathlin had already acknowledged that the release of unburned gas, known as cold venting, was not a suitable method of disposal. And an email from the Environment Agency on 23rd September confirmed: “No cold venting of any gas from the well must take place”.

In response to our question about its policy on cold venting, the Environment Agency said: “We require operators to capture as much methane as possible and would not allow cold venting other than where there was a health and safety risk”.

The CAR form for 22nd October recorded there had been venting of well head pressure to zero on 5th and 15th October and to 6.67 psig [pounds per square inch] on 17th October. This was considered to be a breach of permit condition 3.3.1. The CAR form categorised each breach as a C3 and recorded: “We will consider what enforcement action is appropriate”.

At the same visit, the inspector also recorded another C4 breach of condition 1.1.1 (management systems). The CAR form reported that the copy of the Odour Management Plan used by the Well Site Supervisor was out of date. Staff were also using another document which was undated and not part of the Environmental Management System. The CAR form also mentioned a dead brown rat and a mouse in the perimeter ditch and evidence of oil in the ditch water. 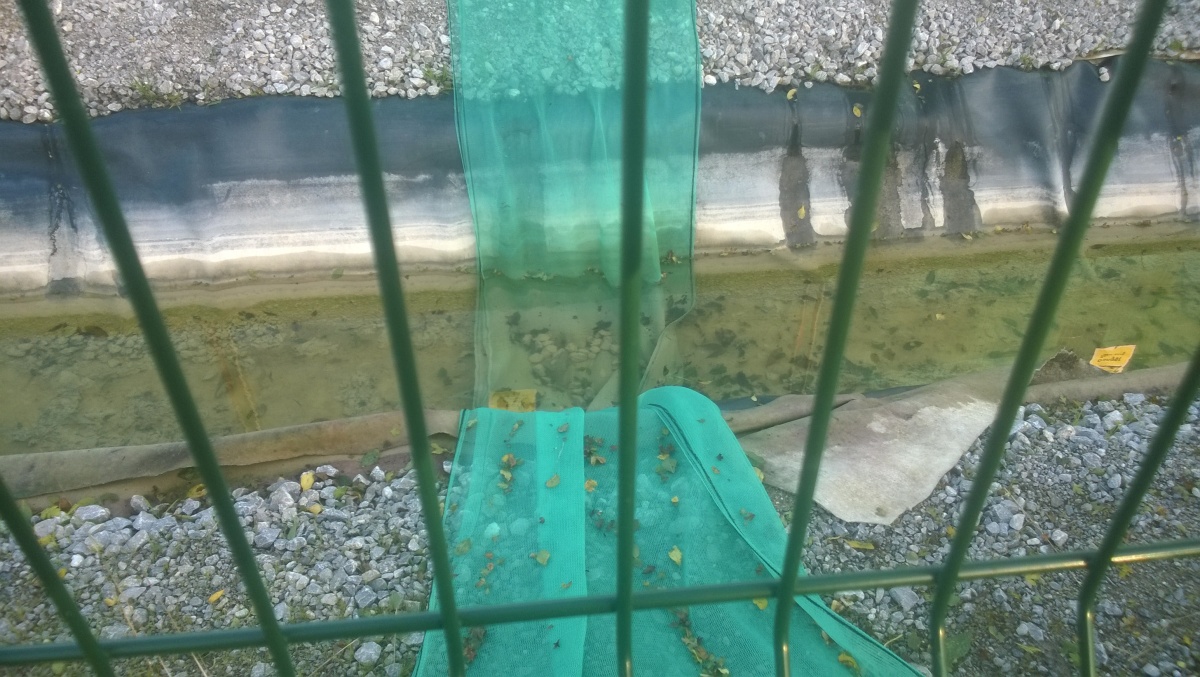 The last inspections at West Newton were on 29th October and 3rd November. Neither recorded any breaches. On 29th October, the CAR form reported “the operator is now currently in process of suspending the well”.

But it again referred to the perimeter ditch. “Operator advised to review the disposal of ditch water”, it said, adding “The operator is using absorbents in an attempt to remove any potential oil contamination from the surface of the water, but the effectiveness of this is debateable”.

The CAR form indicated that the current disposal method was suitable for uncontaminated rain or surface water. It said: “The ditch has the potential for including other contaminants which could potentially render it as disposal under a hazardous waste code”. On 29th October, the inspector observed no dead wildlife in the ditch.

On 3rd November, the CAR form reported that, according to the operator, the well was suspended. The flare had been disconnected and was ready for removal. Two of the five brine tanks had already gone.

The CAR form did, however, note that the air monitoring location on the top of a bank in the south east corner of the site was “directly in the plume from the generator exhaust”. It also reported oil residue in water in the south end of ditch and emulsified oil at the north end.

On 5th February this year, Rathlin Energy reported on its website that West Newton A “has now been suspended for the time being”. The website added: “We did not exercise our permitted option to undertake a mini fall-off test at West Newton A and we have no intention to. We may revisit the site where we still have permission to drill and test a second well”.

The website said the proposed West Newton B well, if approved, would drill to 2,000m to test for hydrocarbons in permian carbonate rocks. “It is anticipated that this application will be considered East Riding of Yorkshire Council’s planning department in the spring (2015)”, the website added.

Click here to see details of the company’s application for West Newton B and to comment on it. The deadline for comments has been extended to 15th March 2015.

What went wrong at West Newton