Pink Footed Geese feeding on a wildfowl refuge set up by Cuadrilla were shot by hunters who had leased the same fields.

The fracking company rented land on the Lancashire coast as winter grazing for birds displaced by its exploratory gas well at Becconsall, near Banks.

But shooting rights on the land had been let to members of the Old Hollows Gun Club who legally shot geese there in the winters of 2013 and 2014.

The conflicting use of the fields came to light when local people compared the two agreements and revealed they covered the same land at the same time. A member of the gun club has confirmed he killed Pink Footed Geese on the land during a winter season while Cuadrilla’s lease was in place. 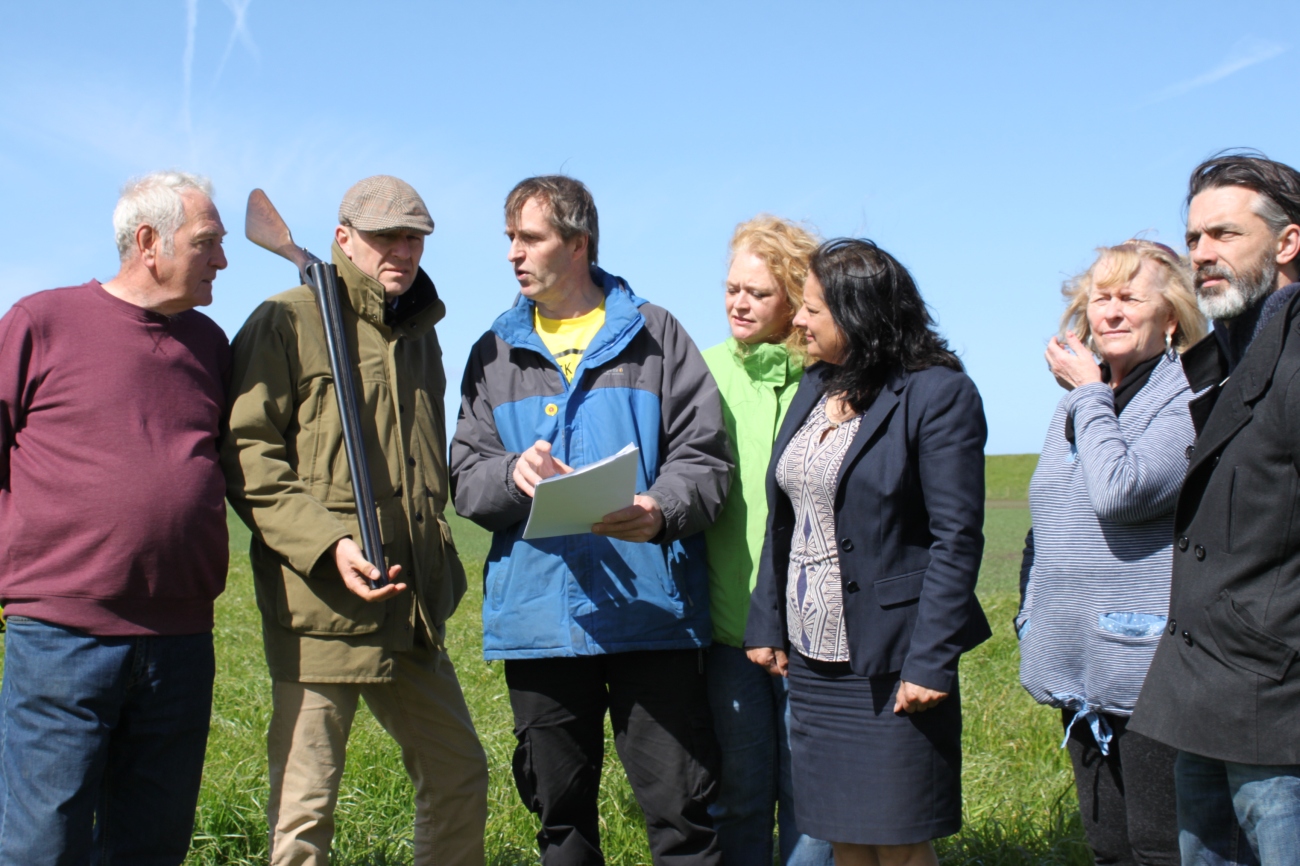 The latest revelations raise more questions about Cuadrilla’s activities in Lancashire and the ability of officials to regulate. Our research has identified multiple breaches of planning conditions at Cuadrilla sites in the county and West Sussex, as well as drilling problems, accusations of well integrity failure, trespass and damage, a censure by the advertising regulator, protests by local residents and the now well-known induced earthquakes caused by fracking. (Link to our post on this and click here for a Timeline of Cuadrilla’s operation at Becconsall)

The campaign group, Frack Off, said companies like Cuadrilla were frequently held to account by community groups and local people who were “devoting large portions of their lives to the campaign.”

Cuadrilla Resources acknowledged that it did provide set-aside land for wintering birds but the agreement did not “address rights to permit shooting”. Go to the end of this post for the full statement.

Cuadrilla’s Becconsall well is under 1km from the edge of the Ribble Estuary, an internationally-important area for Pink Footed Geese. The birds fly from their breeding grounds in Greenland and Iceland to spend the winter on the Lancashire coast. More than 10% of UK Pink Footed Geese rest and feed in the area.

Cuadrilla began work on the Becconsall well, also known as Hesketh Banks or Banks, in March 2011. Lancashire County Council, which granted planning permission, instructed Cuadrilla not to work during the winter bird season. Because of this, it did not require the company to compensate for the loss of the bird feeding land.

But under another condition of the permission, Cuadrilla was required to finish drilling and testing and to restore the site by 27th September 2012. A few days before the deadline, the company applied to the council for an extension of 18 months.

Dr Manchester suggested that the company had breached the terms of its planning permission by working in the winter. Cuadrilla’s ecologist had reported that bird numbers had fallen since work began at Becconsall and Dr Manchester asked whether disturbance from the site had been the cause.

In June 2013, Cuadrilla asked for another extension for Becconsall until September 2014. In a letter to the council, the company referred to talks with local landowners about creating a refuge as mitigation for the loss of bird winter grazing for the 2013-2014 winter.

The next month, Natural England formally objected to Cuadrilla’s plans because it said the company had not provided enough information about the impact on wintering birds.

Within days, on 16th July 2013, Cuadrilla signed an agreement with the landowner, Reaper Ltd, and with three farmers for the use of land north of Marsh Road, three fields away from the drilling site. The leases covered the period 31st October 2013-31st March 2014.

Two days later, Cuadrilla’s consultant Ecology Services UK Ltd, submitted a report which recommended setting aside land for wintering birds to feed and rest. It also said wardens should patrol the fields and shooting should be banned.

Overlay of the map from Cuadrilla’s agreement with Reaper Ltd

But by then Reaper had already assigned shooting rights on the land. The agreement was signed on 22nd  February 2011 for the period up to 31st January 2014. View the Shooting rights agreement 2011

A member of the club, Andy Rowe, said:

“I have shot on these fields with five to six other shooters from the club every two weeks for the last two winters and have been shooting on these fields for many years. We shoot what’s there including Canada Geese and Pink Footed Geese”.

We have also seen testimony that the Old Hollows Gun Club had an agreement to shoot on the fields during the winter of 2013-14. View theTestimony of gun club member. Shooting Pink Footed Geese is legal on land in England between 1st September and 31st January. 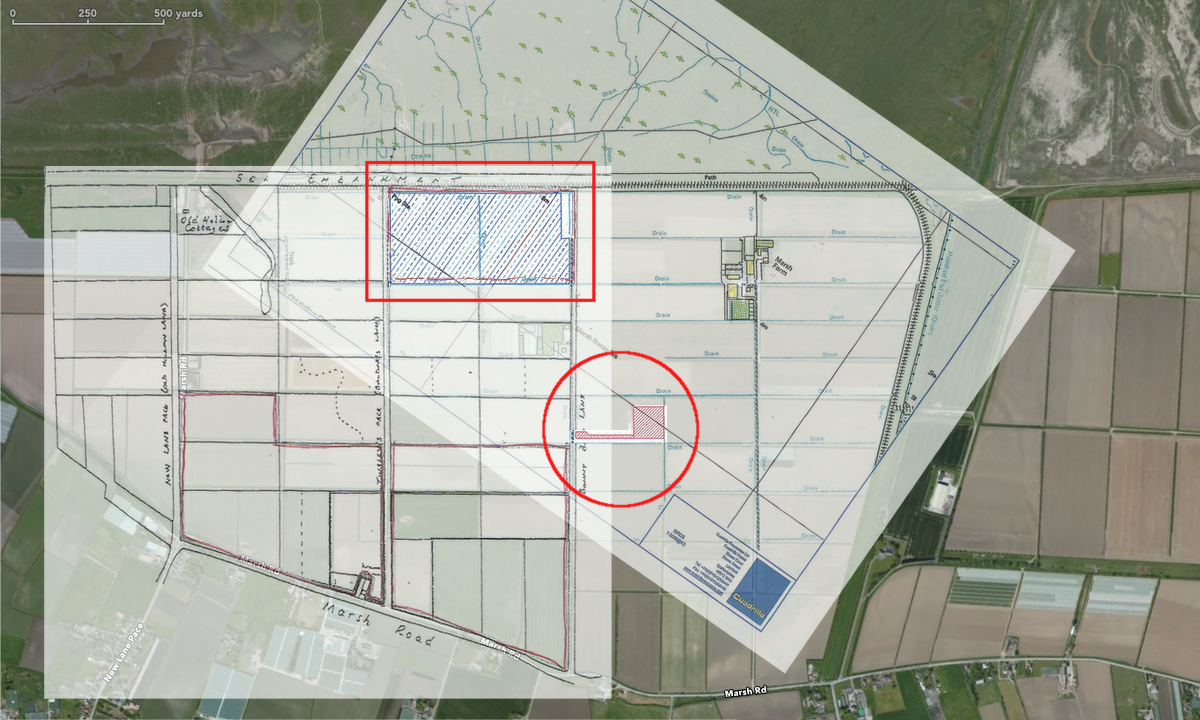 Overlay of both agreements

Cuadrilla abandoned the application after the council required it to carry out an environmental impact assessment. But in March last year the company made another application for the Becconsall site. This time it was for three years to carry out more well tests, followed by plugging, abandonment and site restoration.

Lancashire County Council’s planning committee approved the application in September last year. The drilling compound and well, that should have been at Becconsall for 18 months, would now be in place for at least 5 ½ years. It could be for longer because a report to councillors said the site was “a potential precursor to any mineral extraction”.

A condition of the permission was that Cuadrilla provide a “wintering bird mitigation area”. The condition said the land should be managed to provide food and water. There should be no shooting. Between October and March, monthly bird surveys and daily observations should be made. Activity on the drilling site and vehicle movements should also be limited during the winter.

Unusually, Lancashire County Council did not confirm the planning permission for seven months. We asked the council why this had taken so long. It told us:

The committee’s recommendation to approve was subject to the applicant first providing a unilateral undertaking in respect of the off site ecological mitigation measures to be provided throughout the wintering wildfowl seasons (31st October – 31st March) and subject to a number of conditions set out in the report to the committee and the minutes of the meeting. The planning decision notice will be issued when the unilateral undertaking has been provided. The delay is attributable to the applicant finalising the agreement with the landowners.

The decision notice was finally issued on Friday 1st May and published on the council’s website as planning officers prepared to begin the May bank holiday.

Cuadrilla has entered into a Section 106 agreement – a formal planning contract – to provide the mitigation land. But there are no details on the council website at the time of writing. A note says (in capitals):

“Due to the size of the S106 agreement that accompanies this decision. It is not possible to display the document today it will appear here shortly”

[The details of the agreement have since be added to the website and can be seen here: Document 1 and Document 2]

Local people opposed to Cuadrilla’s activities at Becconsall gathered outside the site yesterday. The campaign group, Ribble Estuary Against Fracking, said it was concerned that Lancashire County Council had given permission for Cuadrilla to return to Becconsall. It said the company had no social license to operate anywhere in Lancashire.

Lesley Graham, of REAF, said “I am wary of a company which refuses to disclose details of the explosives it intends to use and seriously question why it has taken over 7 months for LLC to finally permit the application”.

Cuadrilla’s web page about Becconsall at the time of writing said the company would discuss any tests with the local community before carrying them out. REAF said there had been no communication with Cuadrilla so far. It promised to chase up the missing conditions with Lancashire County Council, monitor what was happening and inform local people of developments.

Andrew West of the campaign group, Frack Off, said: “Fracking companies like Cuadrilla, IGas and Ineos represent a threat to the wellbeing of hundreds of thousands of people (and animals) across the UK. Time and again these companies are being held to account by the efforts of community groups and individuals, regular people who are devoting large portions of their lives to the campaign.”

“People know that the fracking industry requires huge numbers of wells and can see that where the industry has been active for several years, in the US and Australia, local communities are facing severe impacts from water contamination, air pollution and the huge amounts of waste produced.”

Cuadrilla gave us two statements. On the 2013-14 agreement, the company said:

“The shooting of Wintering Birds on the Fylde is an approved practice which long pre-dates and is wholly unconnected with Cuadrilla’s operations.  For the winter of 2013/2014 Cuadrilla  provided for “set aside” land for Wintering Birds to offset the land taken by its exploration drilling site at Becconsall in Lancashire.  Drilling of a well had taken place on the Becconsall site in 2011 and while there was no operational activity on the Cuadrilla site in the winter of 2013 / 14  the independent  ecology report recommended that land be set aside and that no shooting take place on that land.  Cuadrilla entered into agreements with landowners to provide the recommended “set aside” land  but the agreement with the landowner did not address the landowner’s right to permit shooting.  This was because at that time the farmer had a vermin control problem which required him permission to shoot on that land in order to control the infestation.”

On the Section 106 agreement Cuadrilla said:

Under the terms of the unilateral undertaking, the land owner has committed to carry out various bird management and mitigation measures on the relevant land. This includes a commitment that during the winter months (between 1 November – 31st March)  “There should be no shooting within the managed land area for the period of the mitigation management”. The Unilateral Undertaking defined this mitigation period as “the period beginning with the date of grant of the Planning Permission and ending on 31 March 2017…”. This means that the land owners are bound by the Unilateral undertakings to comply with the no-winter-shooting commitment from 1st Nov 2015 onwards and not before.