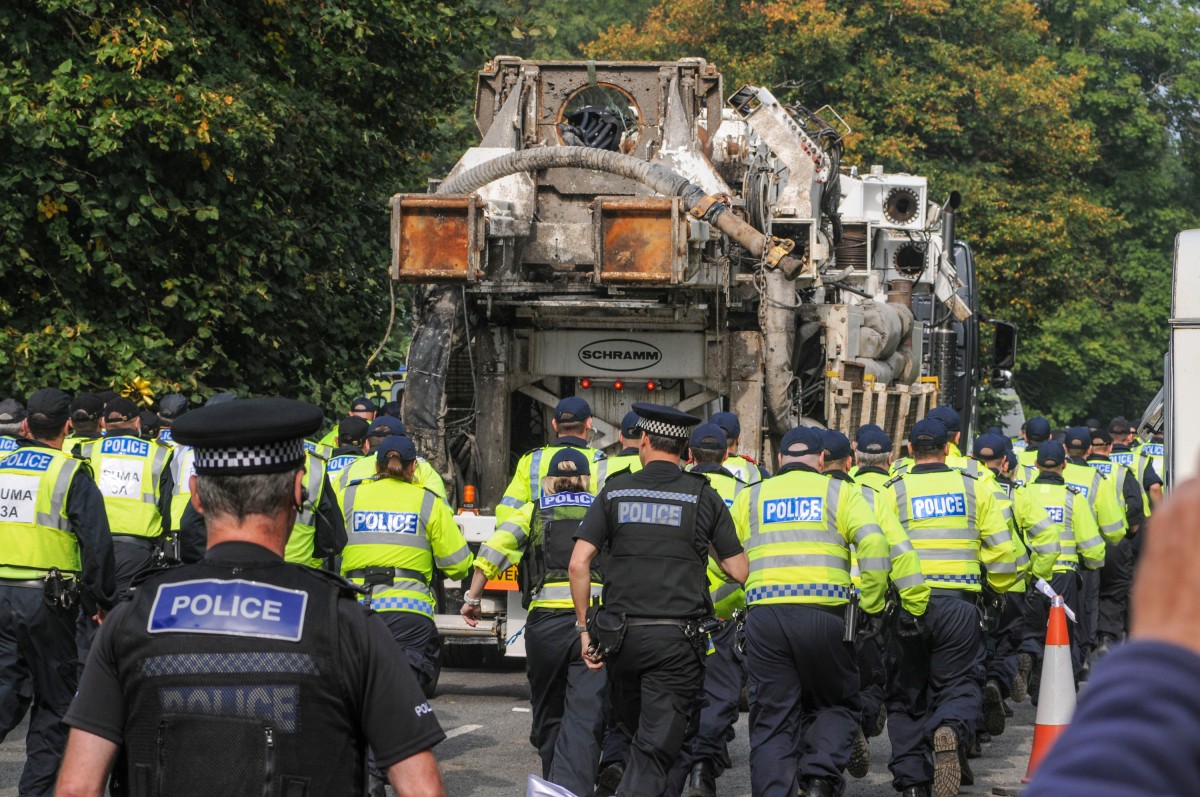 Traffic has become one of the most contentious issues in planning decisions for onshore oil and gas.

Recently, it was behind the refusals of permission for fracking at Roseacre Wood in Lancashire and a conventional well between the West Sussex villages of Kirdford and Wisborough Green. It was also a key argument used by opponents of exploratory drilling in the Surrey Hills Area of Outstanding Natural Beauty.

Yesterday, the debate over the volume of traffic likely to be generated by a proposed fracking site in North Yorkshire got more divisive.

A local campaign group accused Third Energy of misleading residents in its literature about plans to frack an existing well in Kirby Misperton. 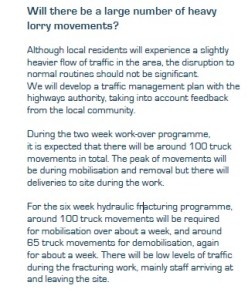 A newsletter (see left) issued by Third Energy during public consultations earlier this year said traffic might be “slightly heavier” if its plans went ahead.

But it said “disruption to normal routines would not be significant”.

The newsletter estimated 265 lorry movements to the site during mobilisation, fracking, testing and removal of equipment, which would take place in the first eight weeks of operations.

The newsletter gave no figures for car or light vehicle movements during these phases.

Nor did it give details of traffic generated by well testing, production or abandonment, which would come later.

Another consultation document (see extract below) estimated 266 lorry movements for the same operations.

This itemised the figures for the first eight weeks but also did not give information about the later stages.

Extract from the consultation brochure

When well testing, production and abandonment were added, the total movement of HGVs, cars and LGVs reached over 14,000.

“Many people are now wondering what other aspects of the application have changed since the consultation”.

The Reverend Jackie Cray, who lives in Kirby Misperton, told the York Press yesterday: “We’re very concerned at this huge increase in HGV traffic, and the impact this will have on the village”.

Referring to traffic predicted for the first eight weeks, she said: “910 HGV movements is vastly different from the 266 they claimed earlier in the year, and for there to be such a discrepancy is extremely worrying.”

Third Energy, funded mainly by Barclays Bank, said the figures in the consultation newsletter were not comparable with those in the planning application. A spokesperson said:

“In the leaflets Third Energy produced, round trips were described as one journey but in the planning application they are counted as two”.

He added that the company had changed some of its plans following the consultation. So, the planning application proposed to remove waste water by road tanker, rather than pipeline, and it included plans to build a noise barrier around the rig from 42 shipping containers. The spokesperson said:

“[This] led to an increase in truck movements, a fact set out in our planning application that has been available for the public to view since July.”

People can comment on the application until 14th October. But with just five pages of text, the newsletter is much easier reading than the application. (There are now 216 documents on the North Yorkshire County Council website related to the application. Of these 91 are from Third Energy.)

We asked Third Energy to comment on complaints that its consultation literature had been misleading. The spokesperson said: “We explained why the numbers are different.”

“We are pleased to see that Third Energy are acknowledging that there is a significant increase in truck movements since the consultations.”

“However, we can find no clear reference in the figures quoted in the Planning Consultation Booklet or the Planning Statement that states whether these journeys are one-way or both ways, and feel that Third Energy are looking for excuses to explain away their four-fold increase in traffic movements.”

“This is unlikely to impress local residents, who are now facing far more disruption and noise from traffic than they were told at the public consultations.”

The numbers in detail

For anyone who wants to look in detail at the application, the traffic figures are in chapter 6 of the Planning Statement. This is found on page 4 of the Documents tab of the online application.

The predicted 910 HGV and 504 car and light vehicle movements for the first eight weeks of operations are made up as follows:

The next phases of the well involve a 90-day production test, followed by an estimated nine years of production if the test were successful.

The newsletter gave no details of traffic generated by the test or production from the well. Nor did it forecast traffic figures for abandonment and restoration.

Figures from the Planning Statement, however, predict these phases would generate a further 1,330 HGV movements and more than 11,800 LGV and car movements. They are made up as follows:

If all the traffic figures, in all the phases in the Planning Statement, are added together, the sums reach 2,240 HGV and 12,312 LGV/car movements: a total of 14,552 movements.

And even that figure may not the final number for this application.

The Planning Statement says gas produced from the well is expected to be dry. But it said:

“Whilst very unlikely, if formation water is produced with the natural gas, it will be removed as part of the routine production activity, which includes phase separation and liquid storage on site for subsequent off site treatment and/or disposal at an Environment Agency permitted waste treatment facility.”

There are no figures for vehicle movements for this operation, nor for routine maintenance of the borehole.

* The Planning Statement does not specify the length of the working week during production so we assumed a six day a week operation.

Updated 24/9/15 to correct number of shipping containers in noise barrier from 76 to 42 and correct the number of days in the pre-stimulation phase from 42 to 14 in one of the calculations. Updated 25/9/15 to include extract from consultation brochure