“Just days after an historic agreement at the Paris climate summit to move towards a renewable energy future – the UK Government’s gung-ho approach to a new fossil fuel industry is bizarre and irresponsible.”

“The future economic benefits of fracking are often touted as a key argument for investment in shale gas drilling. But when companies like Cuadrilla are majority-owned by firms based in offshore tax havens, it raises serious questions about where the profits would go.”

“Even worse, the Government seems to be saying it’s open season on the UK’s rural landscapes – forcing fracking on a reluctant public and on our most precious areas. This announcement means that vast swathes of British countryside have been opened up to fracking. And now that fracking under National Parks and other protected areas has been pushed through – it seems that nowhere is sacred.”

Rose Dickinson, Friends of the Earth

“The Government is ignoring evidence of the risks and the wishes of local communities, by weakening regulation and opening up more of the country to fracking.

“Spreading the fracking threat to new areas will only increase opposition to it. Despite having had licenses for years the industry still hasn’t been able to persuade anyone to give fracking the go ahead.

“If last week’s Paris deal is to mean anything more than warm words, ministers must abandon their short-sighted enthusiasm for fracking and give full backing to energy efficiency and renewable power.”

“Vested interests ahead of sustainable future”

“Just days after the British government joined nations from all around the world in agreeing to reduce global carbon emissions, it has voted, not only to allow fracking to take place under national parks, but has also announced a new round of Petroleum Exploration Development Licences (PEDLs) across Britain, including eleven newly licenced areas in Somerset and Wiltshire.  These licences allow exploration and production of unconventional oil and gas, which may include fracking.  Because these areas are important and special in terms of nature and wildlife, they have recently been subject to assessment under the ‘Conservation of Habitats and Species Regulations 2010.”

“It’s not just National Parks that are threatened by fracking after last week’s vote in the House of Commons to allow fracking under protected areas.  Fracking will also be allowed under the following protected areas if they lie within a PEDL licence area: Areas of Outstanding Natural Beauty (AONBs), Sites of Special Scientific Interest (SSSI’s), Ramsar sites, World Heritage sites, National Monuments, ancient woodland, Special Protection Areas (SPA’s), Special Areas of Conservation (SAC’s) and Groundwater Source Protection Zones (SPZ’s), which are the major aquifers that supply the country with its drinking water.”

“Despite all the evidence submitted during the consultation period by conservation groups and members of Frack Free Somerset to show the deleterious impact that drilling would have for wildlife in these areas, the government has made it amply clear that it is committed to putting its vested interests in the fracking industry ahead of any serious attempt to create a sustainable future for our children.”

“Frack Free Somerset is concerned about the air pollution, water contamination, toxic & radioactive waste, health effects and industrialised landscapes that affect the communities in which unconventional gas and oil companies have already been working, and points to the growing body of evidence and peer-reviewed scientific evidence continually emerging from the U.S and Australia, as proof of the dangers inherent in this industry.”

“Frack Free Somerset are concerned that the 7 new licences in North Somerset, just south of Clevedon, through Weston Super Mare, via Steart marshes, Hinkley Point and onto the edge of Exmoor National Park, pose an enormous threat to the communities and wildlife along the north Somerset coastline.  The 4 new licenses, east of Frome, which cross over into the Wiltshire border, affect eleven groundwater source protection zones, which we believe should remain free of oil or gas exploitation.”

“Members of Frack Free Somerset will resist any attempts by the government and unconventional gas and oil companies to impose this toxic industry on our communities, and will be working in close collaboration with anti-fracking groups across the county, including local groups such as Keep Wiltshire Frack Free.” 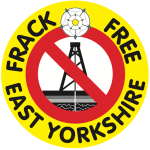 “East Yorks is in the Northern Sacrifice Zone. The 14th round of on shore Oil & Gas Licences has finally been announced today – and it is as bad as had been feared.

“Virtually the whole of our region, from the North York Moors to the Peak District, from Derby to York and from Bridlington down to Skegness, is offered for licence.

Cuadrilla Resources gets a huge area of 15 blocks from Pocklington to Bridlington.  Cuadrilla has a dismal track record, suffering technical failure at every one of their sites in Lancashire, and committing 21 breaches. Further north, the row of squares goes mainly to Ineos.  The 2 squares at Goole go to Europa.”

“It’s time to wake up and smell the methane” 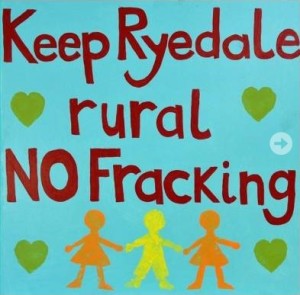 “This is a very black day for North Yorkshire, which has now been officially designated a Fracking Sacrifice Zone in the government’s relentless but misguided dash for gas. If local people haven’t been worried about fracking up to now because it’s not happening on their doorstep, then it is time for them to wake up and smell the methane. Fracking is now on everyone’s doorstep.”

“The scale of the planned operations is staggering, particularly in an area like Ryedale, whose prosperity depends on the tourist economy and agriculture. If these plans are allowed to go ahead, Yorkshire will soon become one huge gas field, with grave consequences for our local industries, environment, wildlife, health and peaceful way of life.”