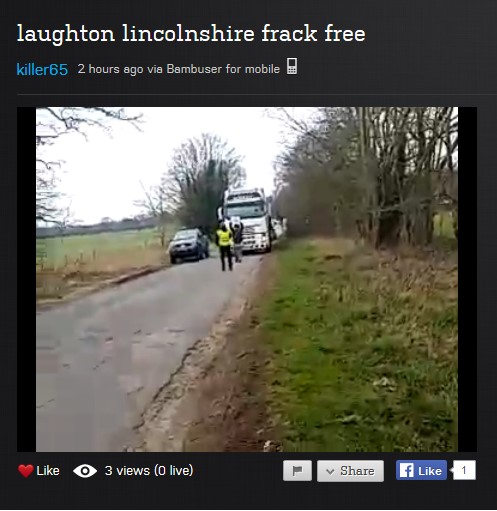 Egdon Resources has been moving equipment off its oil exploration site at Laughton in Lincolnshire after deciding to abandon the well.

The company announced last week the hydrocarbon shows were “not sufficiently encouraging to warrant testing”.

A year ago today, Egdon announced it was abandoning another Lincolnshire well,  Kiln Lane-1, near Immingham, for similar reasons.

For the past two days, campaigners against drilling have been filming vehicles leaving the Laughton site with equipment and materials.

Egdon had said in February (link to statement) the Laughton-1 well would target an estimated resource of 1.3m barrels of oil in a 15m sandstone reservoir known as Silkstone Rock. Other potential reservoirs were thought to be the Kilburn Sandstone and Wingfield Flags.

But the Silkstone Rock turned out to be “poorly developed”, the company said. It told DrillorDrop today the hydrocarbon shows were:

“below the “cut-off” used by the industry and at a level where we would expect mostly formation water rather than oil to be produced if the well was tested or produced.”

A spokesperson for Egdon added:

“The well has already been plugged with a series of cement plugs in line with an approved programme of work and best industry practice.  The surface casing has also been cut below ground level and a plate welded on in preparation for site restoration.”

“Restoration will commence as soon as the contractor can mobilise to site and when weather conditions are appropriate for ground works.  We expect this to be in around 4-6 weeks.  All materials will be removed and the site will be returned to agricultural use as required by our planning consent and under the terms of our environment agency permit.”

“This completes the work commitment for the licence’s first term and allows it to proceed into its second term during which the remaining conventional and unconventional hydrocarbon potential will be further evaluated.”

We asked the company about its plans. Here are our questions and Egdon’s replies:

Q What are the unconventional resources in PEDL209 referred to in the press release and when does Egdon propose to begin?
A PEDL209 is in the extreme eastern part of the Gainsborough Trough geological basin where the BGS in their 2013 report, identified potential for shale gas resources at depth beneath the basin within the so called Bowland Hodder intervals.  Any activity in PEDL209 will be dependent upon the results of other planned drilling within the region, with the company having no firm plans for unconventional drilling in this licence at the present time.

Q As this work completes the commitment under the first term of the licence for PEDL 209, when does the second term begin?
A 1st July 2016

The Kiln Lane 1 exploration well at Mauxhall Farm, Stallingborough, was drilled in February and March 2015 to a depth of 2,291m.

The well, in PEDL181, was targetting sandstones containing what had been estimated at 2.9m barrels of recoverable oil.

But in a statement on 23rd March 2015 Egdon said the sandstones encountered were water wet and the well would be plugged and abandoned.