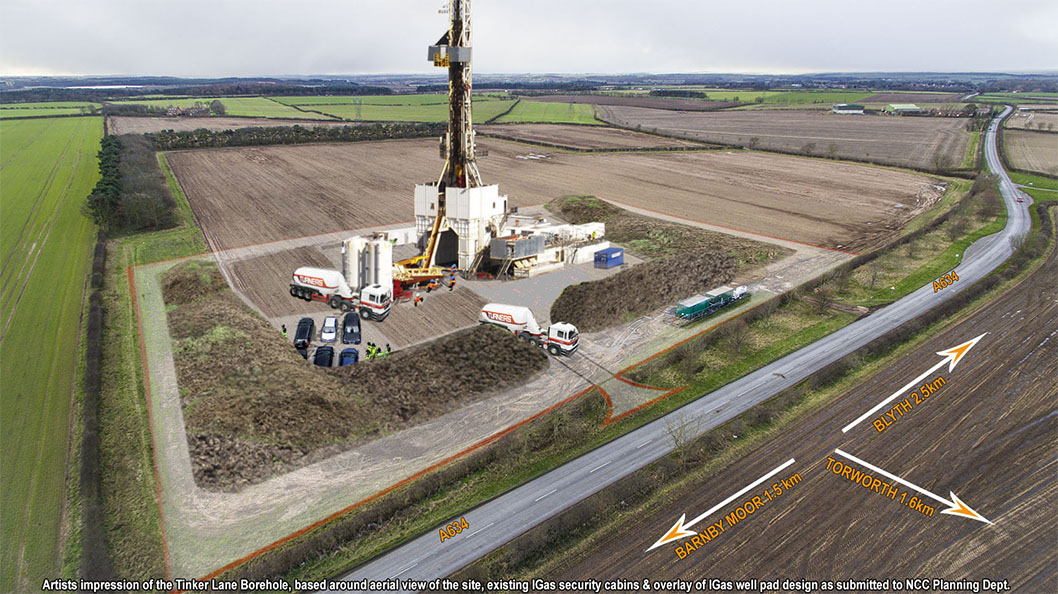 Artists impression by Bassetlaw Against Fracking of the Tinker Lane site

IGas has confirmed it has applied for planning permission to drill for shale gas at Tinker Lane, in Bassetlaw, north Nottinghamshire.

The application is in the name of the IGas subsidiary Dart Energy (East England). It has not yet been validated by Nottinghamshire County Council and there are no online details yet.

“Nottinghamshire County Council received a planning application on 12 May 2016 to carry out shale gas exploration at Tinker Lane (A634) between Barnby Moor and Blyth from Dart Energy (East England). The application is currently going through the validation process.”

This is the company’s second application for shale gas exploration in the area. Later this summer, councillors are expected to decide on proposals for two wells at Springs Lane, Misson.

The Misson application does not include fracking and IGas has said the Tinker Lane application will not either. But the company has said it may apply later to hydraulically fracture at the sites in future.

DrillorDrop understands that the Tinker Lane planning application was submitted two days after a deadline set by Bassetlaw District Council in a dispute over the use of the site.

Local people had complained that the company had installed portable buildings, lighting and fencing without permission. IGas and Bassetlaw District Council consulted lawyers over whether this was within planning rules.

In a statement, Beverly Alderton-Sambrook, Head of Regeneration at Bassetlaw District Council, said:

“Bassetlaw District Council’s Planning Enforcement Officers advised IGas to submit a planning application to Nottinghamshire County Council for the retention of the portacabin and any ancillary equipment.

“We understand that IGas has submitted this application to the County Council, who are the Minerals Planning Authority, and the two parties are currently in discussion regarding this application.”

“Bassetlaw District Council gave the company until May 10 to put a full application including all of the existing infrastructure already placed on the land to the Planning Committee at NCC [Nottinghamshire County Council].

“Of course they were two days late in meeting the deadline when there would have been enforcement”.

“An engineer from the company told me that they were frightened that a camp would be set up in the field and prevent them from bringing on more equipment and drills. There has never been any threat of this nature to the company from our campaign group. We have acted in a completely peaceful way to make people aware of the dangers of fracking in the area.”

Mr Larder said people in the three nearby villages of Torworth, Barnby Moor and Blyth should “fight back against the potential industrialisation of their beautiful area”.

Details of the Tinker Lane application will be posted online when it has been validated.

A legal notice issued by Dart Energy (East England) last month gave brief information of the proposal. It said the company sought to: “develop a hydrocarbon wellsite and drill one exploratory well for a temporary period of up to three years.”

“For the avoidance of doubt, no hydraulic fracturing will take place as part of this application”.