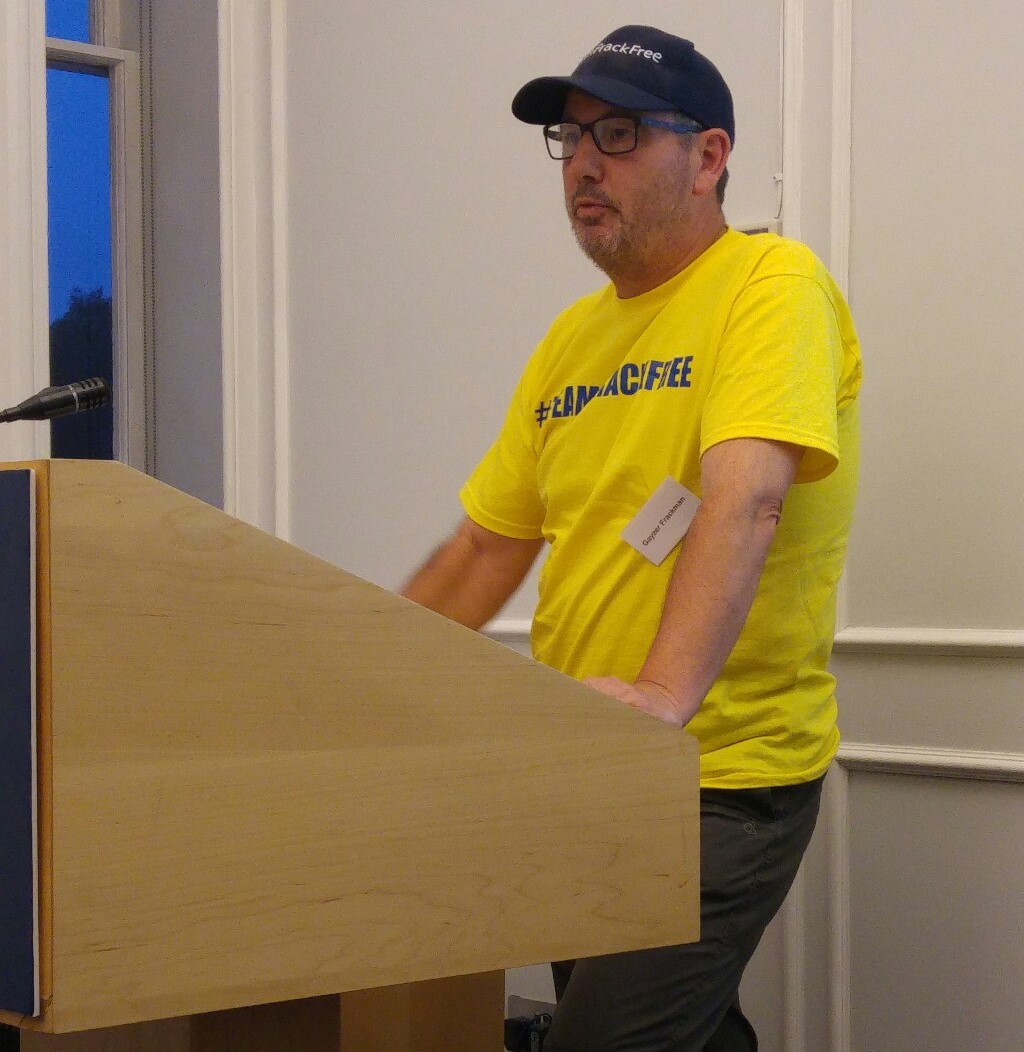 An anti-fracking campaigner launched a crowdfunding campaign tonight for a legal challenge to any government approval of Cuadrilla’s plans for shale gas exploration in Lancashire.

Gayzer Frackman, from Lytham, told an event at a London chambers he expected the government would permit fracking near Blackpool.

The Communities and Local Government Secretary, Sajid Javid, will announce within days whether Cuadrilla should be allowed to frack at Roseacre Wood and Preston New Road.

The company appealed against Lancashire County Council’s decisions in June last year to refuse planning permission for both sites. The inspector at a six-week public inquiry in Blackpool has already submitted her recommendations to the government. The final decision by Mr Javid will be announced by 6 October 2016.

Two community groups, which took part in the appeal, have said their future action would depend on Mr Javid’s decision (see Community’s groups’ reaction at the bottom of this post).

Mr Frackman, who changed his name by deedpoll, is initially seeking to raise £2,000 to begin work on a judicial review of any approval. He will argue that the decision would be unlawful on climate change and human rights grounds.

If the case went ahead he would need to raise £10,000 and then more to fund expert evidence and legal expenses for the main hearing.

“The government has made it abundantly clear that it will impose fracking on communities in England irrespective of local democratic outcomes and regardless of the known health and environmental risks to current and future generations.”

“However we can challenge them in the courts and we will do so with your help and with the expert legal team”.

He is represented by solicitor-advocate, Paul Stookes, of Richard Buxton solicitors, and barristers from the human rights chambers, Garden Court.

“Let’s get these people working so we are ready for these decisions.”

“Help them win on our behalf. Get evidence in front of judges. We can win this and we can win it in court. Let’s get it done this year. Demand the ban.”

“I have done every single thing that I can think of to stop fracking in our community. I do not want any other community to suffer like mine has.

Environment consultant, Richard Taylor, told the launch event that shale gas was not compatible with UK commitments under the Climate Change Act. He said the government had not explained how it would meet three conditions set by the Committee on Climate Change. He added that research by the UK Energy Research Council had shown that gas could play only a modest role as a bridging fuel in the UK between now and 2020. Without carbon capture and storage there was little scope for gas use in power generation beyond 2030, he said.

“UK energy policy has to be based on the best possible science. The Committee on Climate Change has provided that and the government is ignoring it. We have to show some leadership.”

Marc Willers QC, joint head of Garden Court, said he believed there was the basis for a climate change claim against the UK government. He identified legal mechanisms that could be used, including tort, negligence, nuisance and breaches of the European Convention on Human Rights.

“If we do not bring it, who will? If we don’t bring it what hope is there for future generations? We think we can bring a claim in this country which would make everyone wake up.”

Dr Stookes said a judicial review would have to be lodged within six weeks of the government’s decision on the appeals. It was important to begin work before any announcement, he said. He added that a case was likely to go to court within about three months.

Gayzer Frackman’s appeal is supported by the Environmental Law Foundation and hosted on the CrowdJustice website at www.crowdjustice.co.uk/case/demand-the-ban

If the government rejects both Cuadrilla’s appeals, any money raised would be transferred to another similar CrowdJustice fundraiser.

Two groups which were represented at the public inquiry into Cuadrilla’s appeals responded to Mr Frackman’s action.

“Preston New Road Action Group are a Rule 6 party on the Cuadrilla appeals case currently with the Secretary of State. We have been involved with our own legal team and expert witnesses through the planning process and public inquiry. Our future action depends on the outcome of the Secretary of State’s decision. We have had no knowledge or participation in this particular legal action. We do however, recognise the rapidly growing opposition to fracking across the UK and understand that individuals may wish to make their own personal stand against it.”

“Roseacre Awareness Group were very surprised to hear about Mr Frackman’s legal challenge and Crowdjustice fundraiser launched last night. Whilst we admire his dedication and persistence he does not actually speak for, nor represent, our group.  Roseacre Awareness Group, together with Preston New Road Action Group and Friends of the Earth, acted as a Rule 6 party at the recent Public Inquiry and we are currently awaiting the decision from the Secretary of State before deciding on our next move. We will be taking our own legal advice, as to the best way forward, but this will very much depend on what the Secretary of State determines.”