The largest shale gas exploration company in the UK was granted an interim injunction this afternoon against anti-fracking protesters.

The order issued by Mr Justice Morgan at the High Court in London, seeks to prevent obstruction or interference in INEOS Shale activities.

It covers eight named locations, including two proposed shale gas sites in Derbyshire and Rotherham, as well as company offices and property belonging to site landowners.

It also applies more widely than injunctions sought by previous oil and gas companies by covering routes to the proposed exploration sites and to activities undertaken by INEOS employees and members of its supply chain. This includes any depot, equipment, people and operations.

Blockades of the Marriott Drilling depot in Derbyshire are covered by the injunction, INEOS confirmed.

According to a notice on the company’s website, anyone who breaches the order by “interfering with lawful activities” would be “held in contempt of court and may be imprisoned, fined or have your assets seized”.

“At INEOS we will not stand for intimidation, threats or risks to safety. Today’s High Court Injunctions will protect our sites, our people, our suppliers and the public from the militant activists who try to game the system and cause maximum disruption.”

“We will seek it for as long as we consider there to be a risk that we need to demonstrate that we’ve thought through in a safety sense.”

He said the company would seek injunctions for any future sites where it applied for planning permission if it had evidence of risk.

Mr Pickering said the injunction sought to address what he called “a blurring of the boundaries between unlawful and lawful protest”.

It coincided with the final day of a month of direct action protests at Cuadrilla’s Preston New Road shale gas site near Blackpool. The coordinator, Reclaim the Power, said today there had been disruptive action every working day in July. More than 70 people had been arrested and mass demonstrations had taken place every Friday. 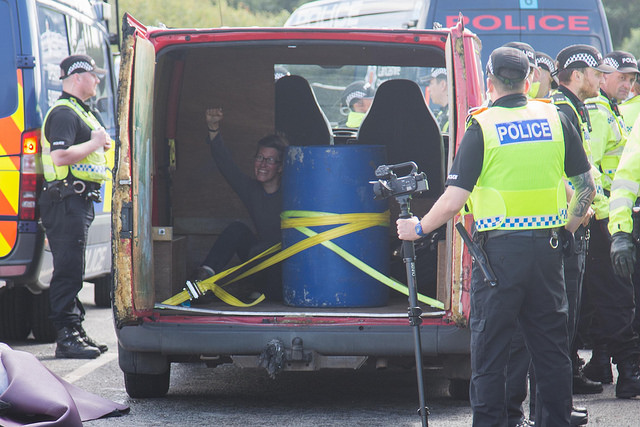 “All this injunction does is serve to reinforce what is unlawful. People have the same rights today with the injunction in place as they did yesterday. It doesn’t affect the peaceful right to protest.”

But the injunction specifically outlaws so-called slow walking, where protesters attempt to delay delivery vehicles. This has been ruled as a lawful form of protest by some district judges at trials of people arrested at protests at Balcombe in West Sussex and Brockham in Surrey.

It significantly increases the risk of protesting against fracking. The maximum penalty for obstructing the highway is a £1,000 fine, although most people who are found guilty are given a conditional discharge. The maximum penalty for contempt of court is two years in prison. INEOS said it would also be entitled to seek to recover damages from any individual breaching the injunction.

The notice also applies to:

“Any other person who knows of this order and does anything which helps or permits the defendants or any of them to breach the terms of this order.”

INEOS said this would mean anyone who promoted a protest knowing the injunction would be breached.

The order will remain in force until a High Court hearing on 12 September, when there is an opportunity for a challenge.

“This is an act of desperation and is evidence of the INEOS attitude towards legitimate dissent.

The company has raised the stakes and effectively sought a national injunction in an attempt to quell protest.

“It will undoubtedly be challenge in courts – but INEOS have very deep pockets.”

Previous injunctions have been challenged by anti-fracking campaigners but most challenges have failed and costs were awarded against named defendants in previous unsuccessful challenges to injunctions.

The notice on the company’s website says the injunction prohibits actions which intend to obstruct, impede or interfere with activities of the company, its affiliates, agents, servants, contractors, sub-contractors, group companies, licensees, employees, partners and consultants. It specifically mentions:

A statement from the company said the injunction also covered trespass onto INEOS shale sites and relevant office locations.

INEOS said it had presented evidence to the judge of what it called “dangerous direct action” at Cuadrilla’s Preston New Road site, as well as at Balcombe, Leith Hill in Surrey, Daneshill in Nottinghamshire, Kirby Misperton in North Yorkshire and Upton in Cheshire.

“Our sites are potentially hazardous for anyone without proper training, so we have a duty to prevent trespassers.

“We safety train our people to avoid the very hazards that militants and protestors naively expose themselves to. For instance, standing in front of a moving lorry whose driver may not be able to see you is dangerous. Blocking roads to all traffic including emergency vehicles is dangerous. Diverting police resources away from local policing is dangerous.

“Applying to the court was the right and responsible thing to do.”

Mr Pickering said he assumed that direct action protests that had occurred at other sites would also happen at INEOS’s proposed operations.

The company is currently carrying out seismic surveying in the East Midlands and is applying for planning permission for sites at Bramleymoor Lane in the village of Marsh Lane, Derbyshire, and at Common Road, Harthill, in Rotherham.

“There has been a slow escalating impact on our people and our suppliers and this is a solution which we can seek to make those boundaries a bit more clear about what is acceptable peaceful protest and what is unlawful that we would act upon.”

He said people carrying out seismic surveys had been shouted at and cars had been blockaded or delayed. He also there had been damage and theft of equipment and damage to private land. INEOS had been affected by lock-on protests and slow walking at the Marriott Drilling depot in Derbyshire, which supplies equipment to the oil and gas industry.

Asked what would be tolerated under the injunction, he said:

“Peaceful protest with placard and making opinion and feeling on the issue known is accepted. It is simply the unlawful act of obstructing the highway, impeding a vehicle, putting at risk themselves or other people by the actions. It is those acts that are already unlawful it is those that this injunction seeks to reinforce.”

Data released by Lancashire Police for the six months from January to June shows that 42% of arrests at Preston New Road were for obstructing the highway.  Out of 182 arrests, there were four for criminal damage, two for breach of the peace, one for theft and two for threatening and abusive behaviour. Many of the cases have yet to be tried and many of the people involved have pleaded not guilty.

DrillOrDrop asked if the injunction meant INEOS had given up on trying to persuade local communities to accept fracking, Mr Pickering said:

“Not at all, we will continue with our community engagement as we consider it very important in explaining our business and the approach we take to managing risk.

“We have been subject to protestor action, including slow walking, the purpose of which was solely to interfere with our lawful activities.

“The High Court Judge has ruled that is unlawful. The injunction does not prevent any peaceful right of protest, or protestors from expressing their opinions and enjoying their human rights to the full.”