Opponents of Third Energy’s operation to frack a well at Kirby Misperton will be allowed to slow down lorries delivering to the site just twice a day, the police officer in charge of the operation has said.

Supt Dave Hannan (pictured), the head of specialist operations at North Yorkshire Police, told a meeting in the village yesterday that the so-called slow walking protests would each be limited to 20 minutes and permitted in only two designated places.

“When protest happens, if it happens, you will get your 20 minutes. You will allow delivery vehicles or other vehicles to go through.”

Some protesters have described the announcement as “a joke”. The police monitoring organisation, Netpol, said North Yorkshire Police seemed to have falsely suggested “peaceful” protest meant no disruption.

Fracking at the Kirby Misperton shale gas well, known as KM8, is likely to be the first example of high volume hydraulic fracturing in the UK since 2011.

Third Energy posted notices in the village giving seven days’ notice of the start of work from 4 September 2017. This means operations could begin as early as next Wednesday (13 September 2017). Third Energy said last week it would be fracking before the end of the year. 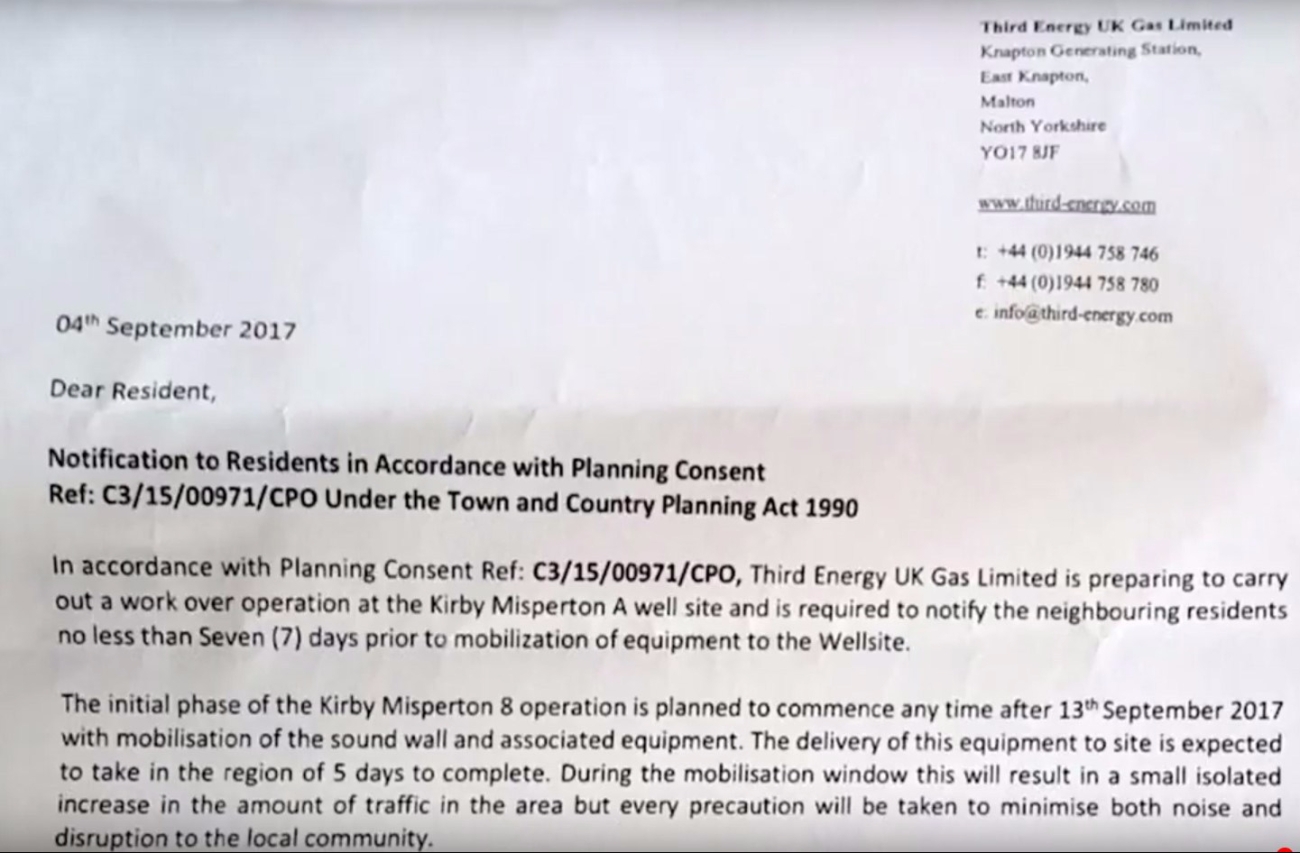 “Slow walks withdrawn if there is direct action”

Supt Hannan, the silver commander of the policing operation, told the meeting of around 80 people that slow walks protests would not be allowed in the village of Kirby Misperton.

DrillOrDrop understands that anti-fracking campaigners had already said they would not disrupt the village.

The Superintendent said slow walks would be limited to two sections of road. The first is on Kirby Misperton Road between the bridge and the roundabout at the eastern entrance of the village. The other section is between the fracking site and the western edge of the village.

The slow walk in the morning would take place after 9am, he said. People at the meeting reported that the superintendent also said that all slow walks would be withdrawn if there were any direct action protests, such as climbing on lorries.

Campaign groups and anti-fracking protesters have said they have not discussed the rules with the police nor agreed to them. Asked at the meeting if his decision was unilateral, the superintendent said:

Slow walk protests have been a feature of opposition to fracking and onshore operations in the UK since 2013, when campaigners regularly blocked the road outside Cuadrilla’s site at Balcombe, in West Sussex. Protesters have attempted to use slow walks outside the Preston New Road shale gas site near Blackpool, where Cuadrilla is currently drilling.

“I feel we are being watched”

The meeting heard that three police CCTV cameras had been installed on Kirby Misperton Lane.

Supt Hannan said the cameras had been placed in what he called “strategically-important locations” chosen by him.

“Those cameras will be used to detect any disorder, any offences that may or may not occur. They also give us the ability to monitor what is happening on the road.”

Local people have said the cameras are all on the section of Kirby Misperton Road between the A169 and the roundabout in the village.

One woman told the meeting:

“I feel personally that we are being watched”.

Supt Hannan also said he had met executive from Third Energy three times but he would not be sharing intelligence or operational information with the company.

“No effect on community”

The officer also suggested that protests would not be allowed to affect in the area. He said:

“I have a job to do, ok. … The rights of Third Energy, the lawful activity of Third Energy and facilitating peaceful protest. I have to balance that.

“I have to make sure that the community from the surrounding area are able to go about their day-to-day business and lifestyles without being affected in anyway.

“So if a road gets blocked then, you are unable to get to a doctors or take the kids to school, go to Tesco’s or whatever, it is my job to try to ensure that road opens and that you can do that.

“What we’re hoping for is that it’s a peaceful protest; there’s a community lives here, there are people who do not want to see the scenes that we’ve seen in other parts of the country in this beautiful area of Yorkshire.”

“That doesn’t come cheaply and that affects our ability to operate across North Yorkshire.”

The Supt said he had asked Third Energy to limit heavy goods vehicles (HGVs) to day-time hours and weekdays only. He said he didn’t have the resources to operate at weekends.

A traffic management plan, which was a condition of the planning permission, has been approved, according to North Yorkshire County Council today. But the document is not available online and the planning conditions restrict deliveries by HGVs to the period 7am-7pm Monday to Saturday, except in an emergency.

The meeting also heard there was an alternative, discretionary route for HGVs through Great Habton if the designated roads were not available.

In response to questions, Supt Hannan said he had made no plans around a second route. But he added:

“I as the police commander have the ability to review the transport plan and change the route if I think it is necessary.”

The most recent statement from North Yorkshire County Council on the KM8 consent said:

“The planning conditions relating to both the Traffic Management Plan for the development and for the prevention of mud on the road have been agreed by the Local Highway Authority.

“That leaves condition 35 outstanding, this relates to the financial commitment required to deliver the restoration and aftercare for the development.  Solicitors representing the developer and the planning authority continue to discuss the detail behind the condition and in so doing will be seeking to agree a date to bring the application to a conclusion.”

This statement was updated on 7 September 2017 with the following:

“The planning conditions relating to both the Traffic Management Plan for the KM8 hydraulic fracturing development at Kirby Misperton and condition 35 which relates to the financial commitment required to deliver the restoration and aftercare for the development, have yet to be fully agreed by North Yorkshire County Council as planning authority.

“No activity relating specifically to this permission can take place before agreement is reached and the county council is therefore in contact with Third Energy about current activity.”