The village is preparing for the arrival of equipment and the noise barrier at KM8 site. The operator, Third Energy, said deliveries would begin from next week.

“Along with fellow residents form the village, we were delighted to take part in last night’s vigil outside KM8. It gives strength to our resolve to resist the threat which fracking poses, not just to this community, but to Ryedale as a whole.”

“People came together to calmly reflect on our love for the land we strive to protect. An emotional moment, as this region is home to so many families and it has been years of hard work which have brought us to this point. We will continue to fight KM8 and all future fracking wells with dignity and determination.’’ 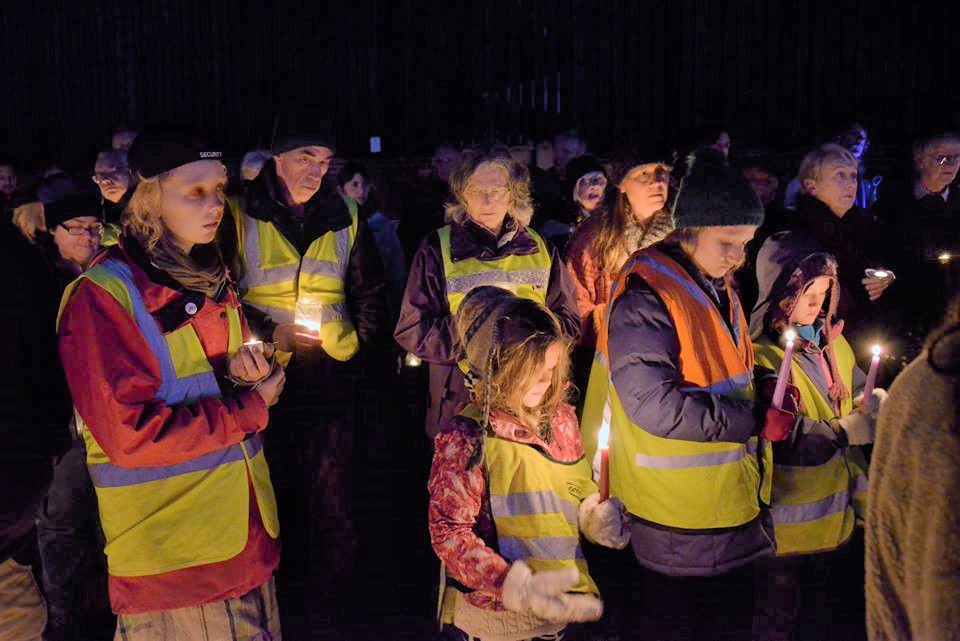 Earlier yesterday, a small number of opponents of the operation sat in chairs in front of the entrance gate and were removed by around 20 police officers.

“Everyone has a choice. You either decide to stand up against what is going to bring about the devastation of the countryside or you sit back and watch.

“I decided to stand with the protectors who are here to stop Third Energy from turning our rural village into a very bad place to live”.

Ian Conlan, from Malton, who also took part in the action outside the gates, said:

“We have tried every other method of objecting to Third Energy’s plans to frack at Kirby Misperton and the will of local people who object to fracking taking place in Ryedale has been ignored, so we have no alternative left now but to protest in this way.

“We will continue to oppose Third Energy in a peaceful manner and urge others to join us if they want to stop thousands of wells being drilled and fracked, leading to the industrialisation of our countryside. Opposition to fracking is strong and growing – we will continue to make our voices heard until the government listens to us and we see a ban on this incredibly damaging industry introduced.”

The community group, Frack Free Ryedale, has reported “already police have been out in force and traffic on nearby roads has been affected”.

Count down to fracking

On Wednesday, North Yorkshire County Council said all the conditions of the planning permission, granted in May 2016, had been met (DrillOrDrop report).

The conditions included a traffic management plan, which had to be approved by the county council.

In a statement, Third Energy said:

“We see this not as a victory but as a huge responsibility.  During the development of this plan Third Energy consulted with the police and local community, to ensure its operations are safe and have minimal impact upon the local area.

“The KMA wellsite has existed for over 20 years without traffic incident, and coexists alongside Flamingo Land.”

Fracking at the KM8 well cannot start until Third Energy has approval from the Environment Agency for its hydraulic fracturing plan and the final sign-off from the Business Secretary.

BBC Radio York is expected to cover the fracking issue on its 9am-12 noon programme hosted by Jonathan Cowap, with an hour’s debate from 10am-11am. Listeners can call to ask questions or give their views on 01904 641 641, Tweet @joncowap and @bbcyork, or contact the programme through facebook http://www.facebook.com/bbcyork, email jonathan@bbc.co.uk or text 81333 (start your message with ‘YORK’).

Green and Black Cross is providing free training in being a legal observer at protests at Kirby Misperton Protection Camp, off Kirby Misperton Road from 12.30pm-6pm. Places should be booked by email

A 12-hour prayer vigil is planned in Kirby Misperton Church, from 7am-7pm.  People are invited to drop for a few minutes or for longer.