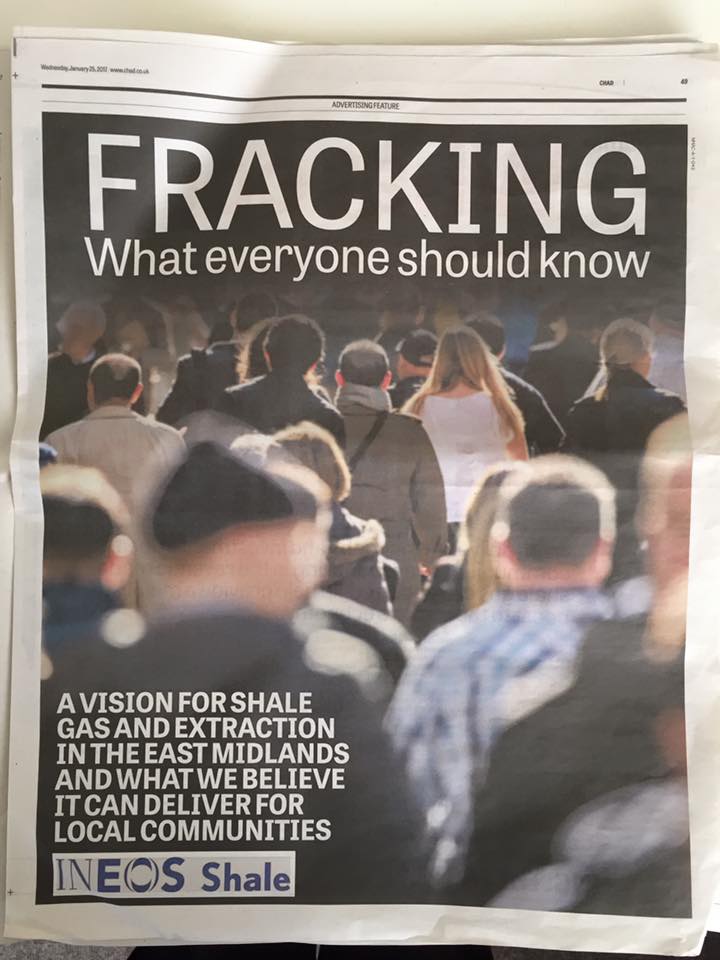 In a ruling published today, the Advertising Standards Authority (ASA), said the wording of a statement about the carbon footprint of gas was misleading and unsubstantiated. It must not appear in its current form again.

The ASA also told INEOS to ensure it held robust documentary evidence in support of claims likely to be regarded as objective.

Complaints about two other statements in the eight-page supplement, distributed to 10 local newspapers, were not upheld. But one of the nine complainants has asked the ASA’s independent reviewer to re-examine the case.

More than 30 separate complaints were made about the supplement to the ASA. Under its rules, the organisation focused on what it said were “the three most important issues”.

In a statement INEOS said it welcomed the ASA’s “reasoned rejection” of what it called “all of the spurious complaints” made about the supplement. The company said it did not get any pertinent facts wrong but accepted it should have provided further detail with referencing.

This is the second time the ASA has upheld a complaint against a UK shale gas company. In 2013, it upheld eight of 18 complaints against a brochure by Cuadrilla Resources. The following year, it upheld all six complaints about an advert placed by the US-based Breitling Energy Corporation.

A complaint about a Greenpeace advert on fracking in 2015 was upheld but later overturned following a report from the independent reviewer. Complaints about material by Friends of the Earth and five anti-fracking groups have been informally resolved. 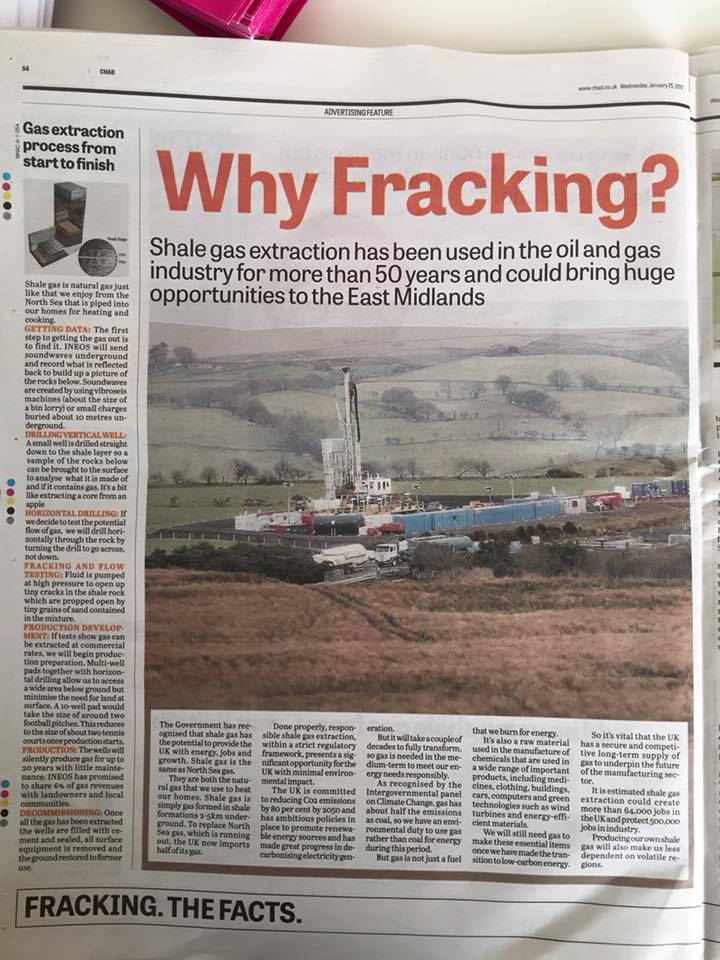 The upheld complaint centred on INEOS’s statement about the relative greenhouse gas emissions of shale gas compared with coal and imported gas.

“As recognised by the Intergovernmental Panel on Climate Change, gas has about half the emissions as coal and around 10% less than imported gas.”

The ASA ruled that INEOS did not make it clear that the IPCC had concluded that the lower emissions for gas could be achieved only under certain circumstances. The carbon footprint of gas depended on “upstream emissions” and whether low emission practices were mandated and how they were implemented.

“We considered that the claim in the ad did not make clear that the emission reductions could only be achieved under the circumstances set out above.”

It also noted that the statement that domestically-produced gas was 10% than imported gas was not made by the IPCC but came from a report by Professor David MacKay and Dr Timothy Stone.

“We considered that the way Ineos’ claim was worded implied that the claimed benefit compared to imported gas had been recognised in full by the IPCC.

“Because the IPCC paper qualified its conclusion that gas had approximately half the amount of emissions as coal and did not discuss imported gas’ emissions benefit in comparison to domestic gas, we concluded that the claim was misleading.” 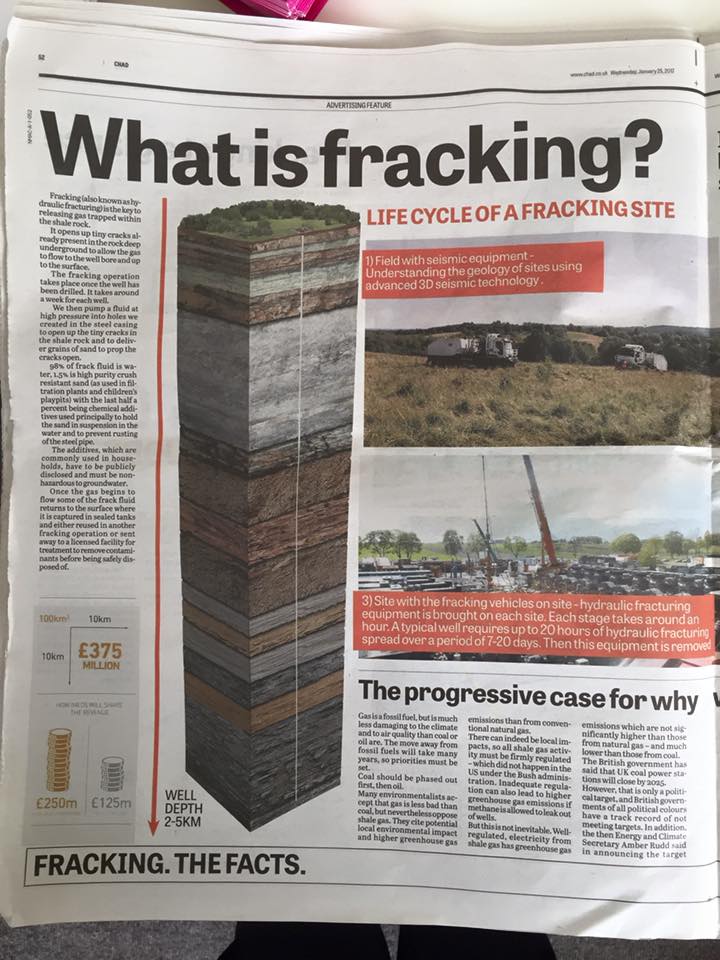 One of the complaints that were not upheld also referred to the impact of gas on climate change.

INEOS said in the leaflet:

“Gas is a fossil fuel, but is much less damaging to the climate and to air quality than coal or oil are.”

The complainants said this was misleading and could not be substantiated. But the ASA decided in INEOS’s favour.

“Because the evidence provided indicated that natural gas was responsible for significantly less GHG emissions than coal or oil, even when estimates of ‘fugitive leaks’ were taken into account, we concluded that the claim was not misleading.”

One of the complainants, John Hobson, of the website Refracktion, said:

“We specifically and repeatedly asked the ASA to look at the claim “Gas is a fossil fuel, but is much less damaging to the climate and to air quality than coal or oil are” as a potential breach of rule 3.13 of their code, which states: “Marketing communications must not suggest that their claims are universally accepted if a significant division of informed or scientific opinion exists.”

“We provided the ASA with a wealth of material which demonstrated that this particular claim is subject to ongoing debate amongst respected academics and informed commentators, yet it is clear from their published ruling that they only investigated this particular potential breach under rules 3.1 (Misleading advertising) and 3.7 (Substantiation), and chose not to investigate it under rule 3.13. We also pointed out that their counterparts in Holland, the Netherlands Advertising Standards Board, had censured Shell and Exxon for making a similar claim that natural gas was “the cleanest of all fossil fuels” in August of this year.”

“Tremors from fracking are very rare” 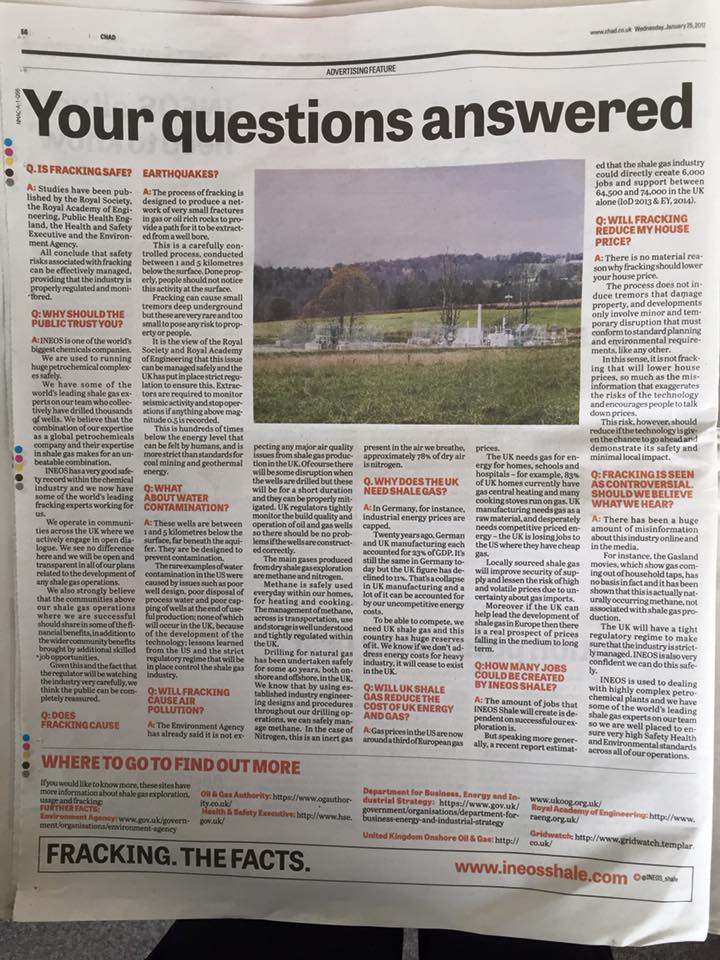 The final complaint considered by the ASA was that INEOS was misleading when it said:

“Fracking can cause small tremors deep underground but these are very rare and too small to pose any risk to property or people.”

The complainants said fracking had caused large earthquakes, referring to one in Fox Creek, Alberta, which measured 4.8.

INEOS said this would not have counted as a large earthquake under the UK’s traffic light scheme for seismic events caused by fracking. The company said that earthquake had not caused damage to people or property.

The company also said there was a different regime in the UK to deal with any seismic activity caused by fracking.

“We considered that because the monitoring and regulation system in the UK was designed to detect small seismic activity and to stop operations in the event of such activity, the claim was not misleading.”

A total of 39 complaints were sent to the ASA on the newspaper supplement. But the organisation investigated only three.

“The ASA ruling fails to mention the significant fact that no less than 39 potential breaches of the ASA code were identified for them in a single eight-page advertising supplement.

“For reasons of their own, the ASA, as a regulator, now refuses to investigate more than three breaches (ASA Complaint Handling Procedure) in any single advertisement so 36 of those 39 potential breaches were not even investigated.”

INEOS said the supplement exceeded 5,500 words and contained more than 100 facts about shale gas extraction. It said: “The ASA ruled that challenges in relation to a single statement only be upheld”.

“We respect the decision and welcome the ASA’s reasoned rejection of virtually all complaints made, and associated endorsement of INEOS’ comments in relation to a number of issues such as climate impacts, air quality and seismicity.

“For example, our claim that any potential tremors caused by fracking are rare, occur deep underground and are too small to cause any risk to people or property. The ASA held this to be reasonable, citing the more rigorous monitoring and regulation system now operative in the UK as a basis for distinguishing incidents recorded in the US or historically in the UK.”

“When it comes to shale gas, opponents have a long track record of spreading uninformed and malicious misinformation.  We are pleased that the ASA dismissed all of the spurious complaints made in relation to this supplement. In so doing it is clear that we did not get any pertinent facts wrong. We accept that in one instance we should have provided further detail with our referencing.”

DrillOrDrop report on the newspaper supplement