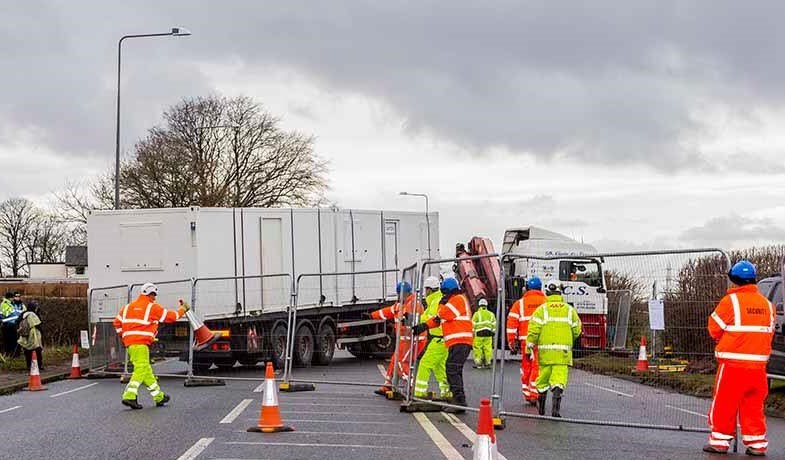 When Communities Secretary Sajid Javid overruled local objections to push ahead with the government’s shale gas plans, residents were assured planning conditions placed on fracking company Cuadrilla would be sufficient to minimise disruption to the local community.

But vehicles making deliveries to Cuadrilla’s Preston New Road site in Lancashire have had to deviate from the agreed route over 100 times during the summer months, data obtained by DeSmog UK through freedom of information requests show.

It is not the first time Cuadrilla has forgone its planning permission to further progress at the site. In July, the company breached planning rules to bring its drill onto the site outside of agreed operating hours.

A traffic management plan agreed by the local council and Cuadrilla outlines a “preferred route” for all traffic, which says it must turn left into and out of the site.

Daily traffic logs kept by Cuadrilla and sent to Lancashire County Council’s planning officers — obtained by DeSmog UK through a freedom of information request — show vehicles entered or exited the site by turning right 115 times between May 22 and August 20.

That means almost five percent of the vehicles serving the site took a route other than the agreed ‘preferred route’ over the period.

The majority of incidents occured in the final two weeks of July, coinciding with the final days of a ‘month of action’ at the site, with vehicles turning right 77 times during that period.

She told DeSmog UK the data was “demonstrable of the non-existent ‘gold-standard, robust’ regulations that are tediously spun by industry and government figures.”

“One incident could be considered a lapse; over a hundred breaches however, is confirmation that Cuadrilla have no regard for the management plan as they know they will suffer zero consequences.

“We have witnessed serious traffic breaches on a daily basis since January at Preston New Road, where ill-trained or unaware HGV drivers enter the site from the wrong direction or with dangerous driving, causing risk to other road users.”

Referring to Cuadrilla’s earlier planning breach, she said, ”what hope do residents have of trusting any regulatory regime that has no power to hold companies to account?”

The traffic management plan requires vehicles to turn left into the site “unless an obstruction is being observed”. The plan says that if there is an obstruction,

“Cuadrilla will consult with the Police and inform Lancashire County Council Highways and Planning departments that a deviation from the preferred agreed route to either right in right out, right in left out or left in right out or a combination of the options as a temporary approach.”

Cuadrilla sought to amend the plan on June 12 to clarify that such obstructions could include, “1) Blocked entrance preventing a left turn into site; 2) Threat of an obstacle confirmed by the Police; 3) Police instruction; 4) Loads or Abnormal Loads which require a right turn under controlled conditions by the Police”.

Local campaigners Preston New Road Action Group raised a number of objections to the changes to the plan at the time, reiterating their concerns that “seeking to allow HGVs to turn right into or out of the site is a hazard”.

The amendments were approved by Lancashire County Council on July 26.

“Right in right out turns are authorised when an obstructions in the road is blocking access from the left hand side or road user safety is at risk. Cuadrilla works closely with Lancashire County Council, Highways Department as well as the Police to ensure that our planning conditions are complied with.

“As you are probably aware Cuadrilla’s deliveries have been subject to illegal activity by protestors climbing onto vehicles and blocking the highway on a frequent basis causing disruption to the local community, business and commuters. Subsequently to avoid further disruption the traffic management plan has been varied to allow right turns into and out of site. This variation has been subject to public consultation.”

The traffic management plan requires Cuadrilla to provide “a record of incidents and issues arising on a daily basis”. But on the documents sent to DeSmog UK, no data is provided for May 1 to May 19. There is also no data related to ‘incidents’ prior to May 20.

Cuadrilla told DeSmog UK that after “reviewing our internal log, the data set is up to date. The log is routinely submitted to Lancashire County Council.”

Lancashire County Council did not clarify whether it had received the missing data in time for publication. Download the traffic log file via Scribd.

This article was first published on DeSmog UK on 24 October 2017.