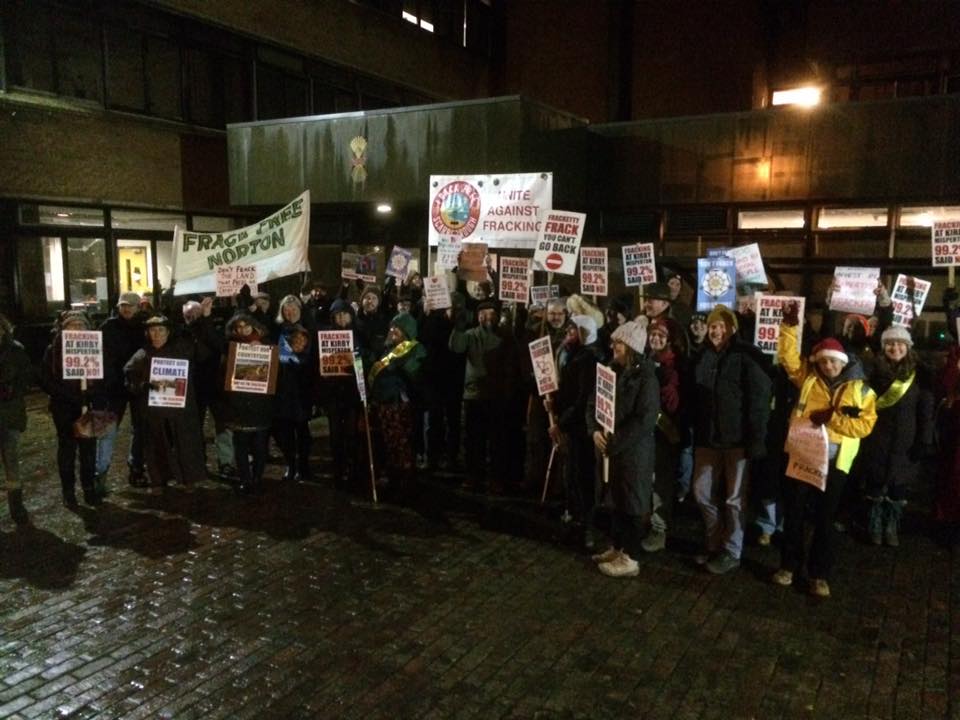 Opponents of fracking at Kirby Misperton organised a Christmas fair at the gates of the Third Energy fracking site near the village. 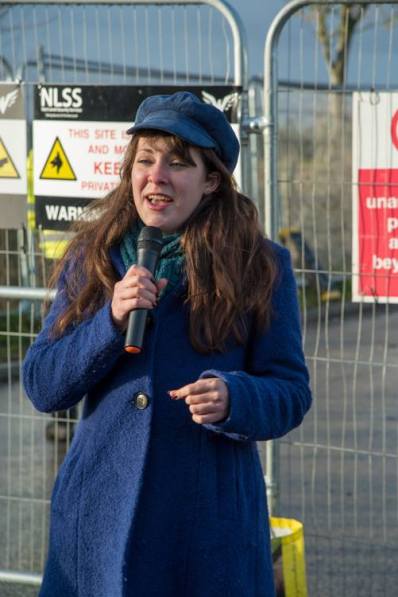 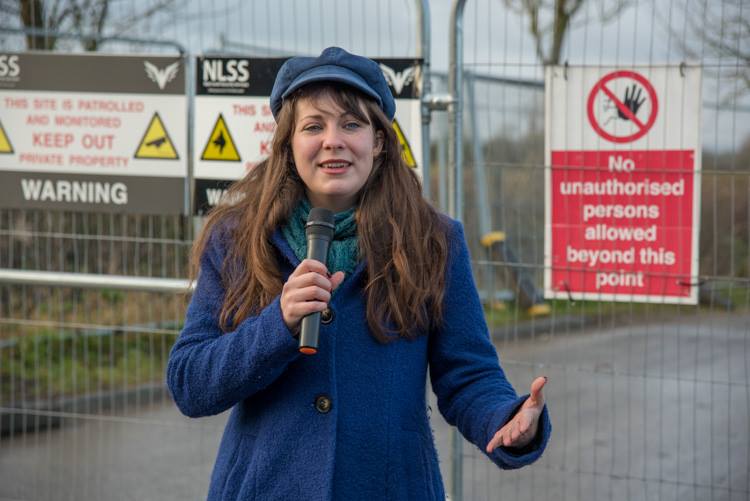 The Deputy Leader of the Green Party, Amelia Womack, says campaigners are winning the fight to stop fracking for good ahead of her visit to the proposed fracking site at Kirby Misperton.

“To the people on the frontline against fracking in Yorkshire, Lancashire, and across the country I say thank you and just look at what you have achieved.

“A delay of even a few days or weeks might not seem like a great deal but it is so so important. It shows hesitation on the government’s part. It’s given us more space to make the arguments against fracking. It’s shown that the likes of Third Energy and Cuadrilla who are determined to get rich off the destruction of communities and ecosystems cannot have it all their own way. It shows we are winning.

“We might look back at this moment in future as a time when the tide turned against the frackers. I’m looking forward to thanking you in person and to being with you once again in the fight to stop fracking.”

Opponents of fracking have continued their campaign against Barclays Bank, which owns 97% of Third Energy. This company is waiting for final approval to carry out fracking at Kirby Misperton in North Yorkshire.

Opponents of fracking took part in a sit-down protest at a meeting of Ryedale District Council last night.

The campaigners wanted a debate on the draft minerals plan covering North Yorkshire before it goes before a planning inspector.

They also argued that Ryedale District Council should employ a consultant to examine the plan which will guide decisions on mineral planning applications until 2030. 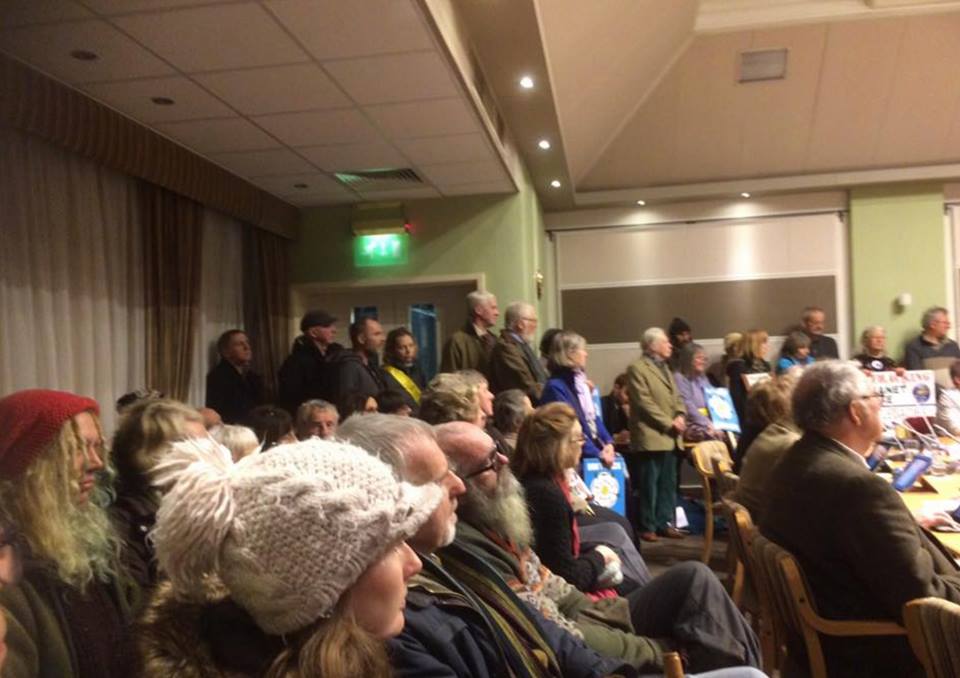 Councillors voted by 17 votes to 9 against the debate. They said they had discussed employing consultants in the summer and under committee rules they could not debate it again for six months without full approval.

But after a brief protest and two adjournments the council promised a debate at a special meeting in the coming weeks.

In March 2016, Ryedale’s planning committee objected to Third Energy’s proposals to frack at Kirby Misperton. But North Yorkshire County Council approved the application in May 2016. 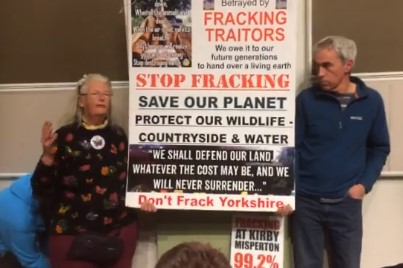 Around 100 people attended the meeting to protest about fracking. One of them, Leigh Coghill, said:

“Ryedale District Council are anti-fracking – they made that commitment. But if this council are against fracking, they need to step it up.”

Opponents of fracking gathered councillors a meeting of Lancashire County Council in Preston. They said the aim of their protest was to communicate their concerns to councillors and local people about  Cuadrilla’s shale gas operations near Blackpool.

Town Councillor, Miranda Cox, who took part in the demonstration, reflects on a year of protests outside the Preston New Road in a Guest Post for DrillOrDrop

Anti-fracking campaigner, Kieran Dunne, was cleared by Preston Magistrates Court of obstruction and assaulting a constable. 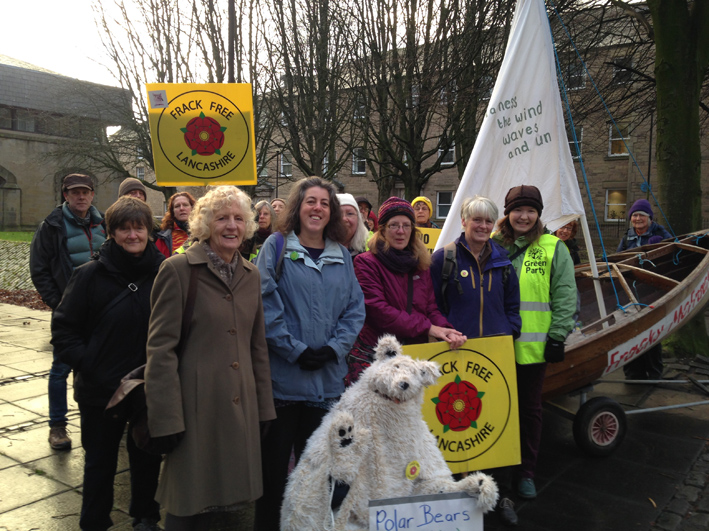 Three members of North Lancashire Green Party were found guilty of obstructing the highway during a protest outside Cuadrilla’s Preston New Road site on 29 August.

The three, Caroline Jackson, Emily Heath and Mollie Foxall, denied the offence at a one-day trial at  Lancaster Magistrates’ Court. They were ordered to pay fines and court costs totalling £1,153.

“We locked ourselves together with bicycle D-locks and sat down opposite Cuadrilla’s gate in the hatched area in the middle of the road for about an hour. We felt it was right and reasonable to use the road for peaceful protest to express our opposition to fracking. We have a responsibility to the natural world and to future generations.”

“Getting arrested, having to stand trial and be cross-examined by a barrister, and ending up with a fine and a criminal record was not a pleasant experience, but we are very grateful for the support we received from friends in the anti-fracking movement. A large group of people (and even a polar bear!) gathered with banners outside the magistrates court before our trial in solidarity.”

“We are disappointed with the outcome of the trial, but we achieved our aim of drawing attention to the fracking industry and the potential harm it will cause locally and globally. We brought a boat named ‘Fracky McFrackface’ to the Cuadrilla site on the day of our protest, to symbolize the impact of fracking on climate change and flooding.  The short video that we made with the boat, explaining the reasons for our protest, has been viewed by 11,000 people, and we got lots of media coverage in local papers and online.” 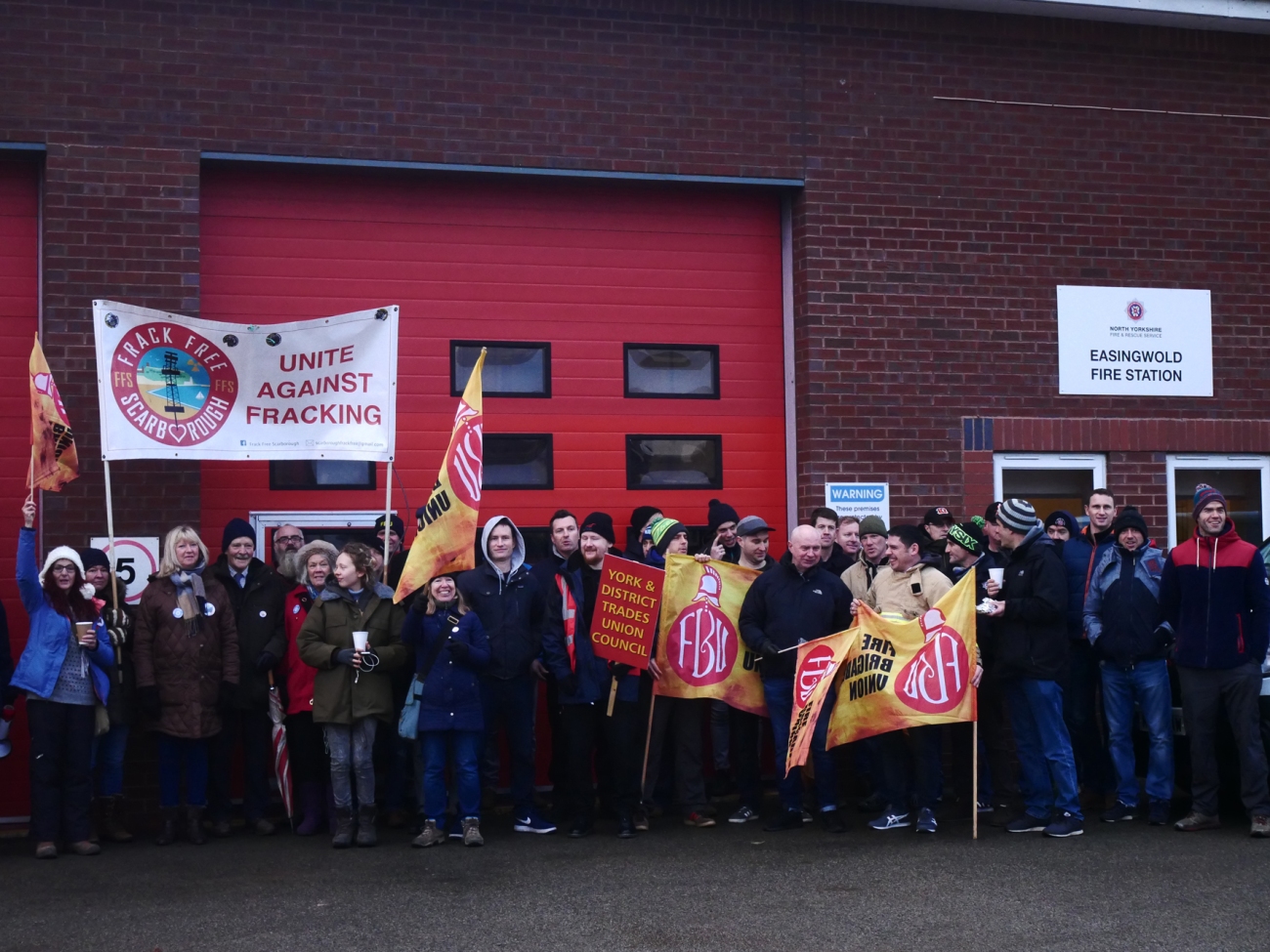 Opponents of fracking at Kirby Misperton in North Yorkshire supported fire crews outside a meeting of the county’s fire authority.

A successful motion increased the number of firefighters on tactical response vehicles to four.

“The fire service must be fully equipped to be able to respond in the event of an emergency. We cannot understand why anyone could be prepared to cut the resources of a vital service upon which their lives might one day depend. Firefighters who risk their lives to save others are true heroes, and should be respected as such.”

Anti-fracking campaigners protested against plans by the British Geological Survey to drill 80 observation boreholes on Ince Marshes. The demonstration marked a community engagement event by the BGS at Chester Town Hall.

“We’re trying to raise public awareness of precisely what the BGS are trying to do. It’s an underhand way of researching into the (fracking) industry, using fracking as a vehicle to secure information which the energy companies want.” 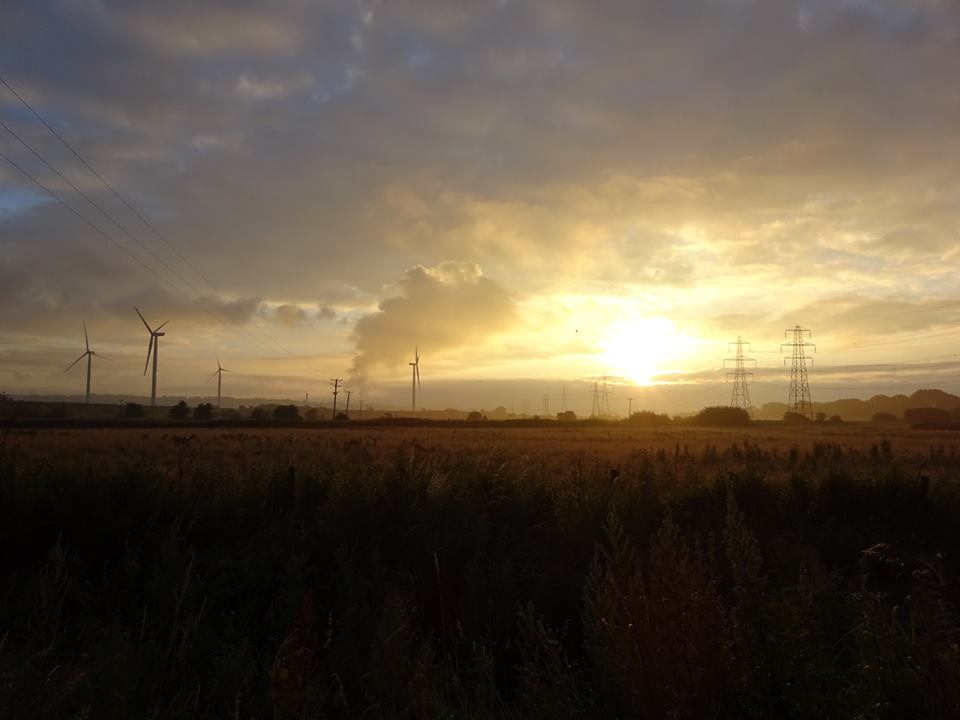 “I stood there, shaking and feeling numb, looking at the board that described my home as ‘a powerhouse for the nation’.

“Science is a wonderful thing, we all like to know more about the things we are passionate about, but these people -businesses – and money were blinded by the science, tunnel visioned into seeing chemicals and technology, and how this can come out of that, and the engineering is sheer human brilliance – and I could see and taste their passion – but to me, this is home.

“This is my family, these are schools, meadows where I go and feed the horses, trees, wildlife, this is green open space with a character of its own, it is the bronze age hillfort on the top of the hill, it is the river, it is where we all live and work, and raise our families, all with hopes and dreams for our futures.”

“But to them, it is one big battery. It is resources that can be exploited, it is the chance to power the nation, to make a name for themselves, and live somewhere else, somewhere cleaner, and greener probably. Who wants to live on an industrial battery?”

Three people charged after anti-fracking protests in Lancashire were cleared at Blackpool Magistrates Court. The case against another campaigner was dismissed. 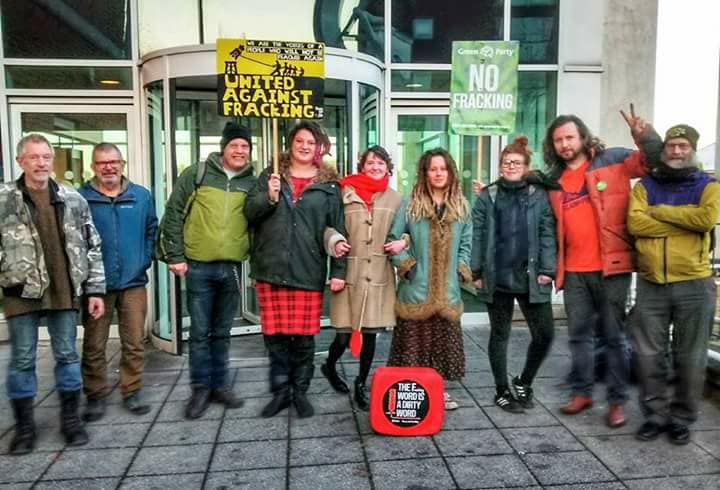 Five anti-fracking campaigners were acquitted of obstructing activities at the PR Marriott supply depot at Danesmoor, near Clay Cross, in Derbyshire

A 34-year-old man was also cleared of obstruction but found guilty of assaulting a police officer. He was find £170 and ordered to pay £100 compensation, costs of £300 and a victim surcharge of £30. The case followed protests outside the depot on 13 July 2017.

Anti-fracking campaigner, Steve Jones, was cleared by three magistrates in Burnley of two counts of obstructing the police during shale gas protests. One charge was dropped before the case began. The other went to trial and resulted in a not guilty verdict.