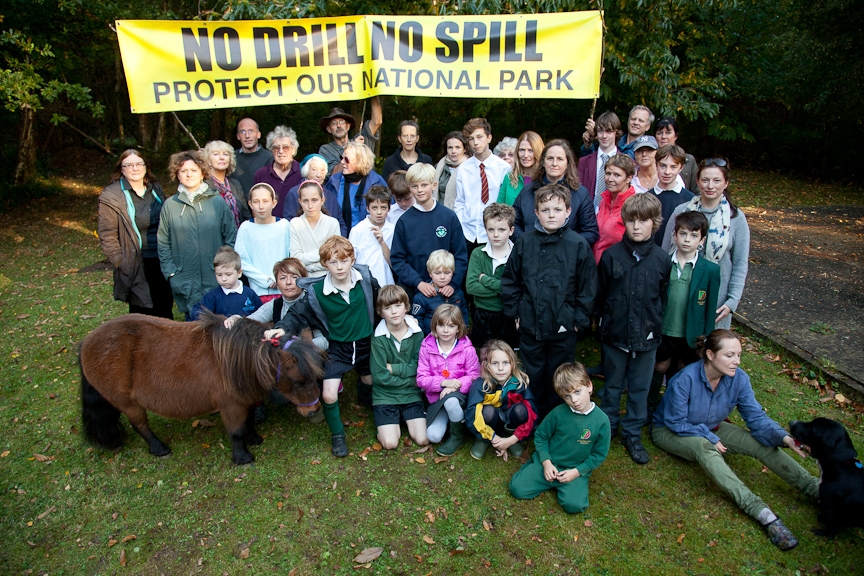 Villagers opposed to drilling for oil in a remote part of the South Downs have accused regulators of a lack of robustness in handling the licence near their homes.

They say the Oil & Gas Authority (OGA), which controls the hydrocarbon licensing system, allowed an area north east of Portsmouth to move into the prized production phase without the usual requirements.

In response to a freedom of information request, the OGA said:

The licence area of PEDL126 covers an area of about 5.5km by 2km between Petersfield and Emsworth on the West Sussex-Hampshire border.

The licence operator, UK Oil & Gas (UKOG), now has the authority to produce oil from the area, subject to planning permission and consent from the Environment Agency.

UKOG has a well site in PEDL126 at Markwells Wood, but no work has been carried out there since 2011.

Markwells Wood Watch, a residents’ group established to oppose production plans at the site, has now called on the government to block the licence.

“Markwells Wood Watch is very concerned by the Oil and Gas Authority’s management of PEDL126 as evidenced in recent freedom of information requests.

“It appears that the OGA have not been robust in their examination of the history of the site nor the phases and requirements before passing it into production phase.”

DrillOrDrop asked the OGA under which legislation it was able to use its discretion to move licences into production. The OGA, now a government company in which the Energy Secretary is the sole shareholder, chose to treat the question as another freedom of information request. This post will be updated with the OGA’s response.

What the licence rules say

According to OGA licence rules, the licence will expire after the initial phase, usually five years, unless the operator has completed the agreed work programme and surrendered part of the licence area.

At the end of the second phase, the licence will expire unless the OGA has approved a development plan.

What happened in PEDL126

Two weeks later, however, UKOG asked the OGA to change the work programme.

On 27 July 2016, the OGA agreed to new licence arrangements. The licence area of PEDL126 remained the same but under the “retention area plan” UKOG committed to submit a planning application by 31 December 2016, drill a horizontal well by 30 June 2020 and submit the Markwells Wood Field Development Plan by 30 June 2021.

In its FOI response, the OGA said:

“A Retention Area Work Plan replaced the requirement for an approved Field Development Plan required at the end of the Second Term of the licence in 2016.”

UKOG submitted a planning application in September 2016 for new wells, testing and production at Markwells Wood. But the application was never determined.

On 2 May 2017, the South Downs National Park Authority announced that UKOG had withdrawn the application. The Environment Agency and Portsmouth Water had objected to the plans because of the risk to groundwater. DrillOrDrop report

UKOG said it would submit a revised application by the end of 2017. But as the year closed, UKOG had not told its investors that it had submitted an application for Markwells Wood and none had been published by the South Downs National Park Authority.

“Licence should be terminated”

In response to the OGA’s decision over PEDL126, Markwells Wood Watch said it was:

“requesting that the Secretary of State for Energy, Greg Clark, terminate the Retention Area Plan due to UKOGs non-compliance with its Work Programme.”

“The water in our area is some of the most pure in England. It is our biggest asset and no risk is acceptable.  We have been arguing for the restoration of the site since September 2016 and will continue our campaign until the well is properly abandoned and the site is fully restored.”

Timeline of extensions for PEDL126 and Markwells Wood

UKOG asks the OGA to create a Retention Area for PEDL126

Letter from OGA to UKOG approves the proposed retention area: the entire licenced area of PEDL126.  The retention area plan is to submit a Field Development Plan for Markwells Wood-1 discovery by 30 June 2017.

UKOG asks the OGA to modify the Work Programme for the Retention Area of PEDL126, created on 29 June 2016

Letter from OGA to UKOG responding to request for modification to Work Programme for the Retention Area created on 29 June 2016. Geographic area of the retention area is the entire licenced area of PEDL126. The expiry date is 30 June 2021. The Retention Area Plan is to submit a planning application for an appraisal well by 31 December 2016, drill a horizontal well by 30 June 2020 and submit Markwells Wood Field Development Plan by 30 June 2021.