Information about the meeting, first publicly referred to during a parliamentary debate, was released following a Freedom of Information request.

But in its response, the Department of Business, Energy and Industrial Strategy (BEIS) published only the agenda and the first eight lines of the two-plus pages of meeting notes. Even the second half of the notes of the minister’s presentations was blanked out “in the public interest”. Redacted notes of  industry meeting with Claire Perry (pdf)

BEIS also said there was no list of the industry representatives attending the meeting.

The meeting was held at lunchtime on 21 May 2018. Later that day, Ms Perry and the then housing minister, Dominic Raab appeared before a committee of MPs to answer questions on proposals to change planning rules for shale gas.

The week before, on 17 May 2018, the business and local government secretaries had released written ministerial statements about the changes. These proposed to classify non-fracking shale gas proposals as permitted development, avoiding the need for planning applications. Shale gas production schemes would become nationally-significant infrastructure projects to be decided by a Secretary of State.

Ms Perry’s meeting came to light last month when she said in a debate that she’d had “a very effective shale industry roundtable”.

This was followed up with the FOI request by Richard Bales, who lives in Ryedale, where Third Energy is still waiting to hear whether it has permission to frack at well at Kirby Misperton.

“I was intrigued by Claire Perry’s so-pleased reference in Parliament to her ‘Shale Gas Round Table’ with Industry Operators, I made polite FOI enquiry as to what this was.

“I didn’t expect much, which is exactly what I got. They admit there was a meeting, but nobody has a list of attendees and won’t tell me what was discussed.”

“There is an undisguised arrogance and disdain for the community evident in the Government position on shale gas and the succession of unilateral decisions that have been taken. Operators clearly have open access to lobby Ministers and their departments, whereas the public have little representation, particularly when very few MPs appear willing to place their constituents wishes ahead of their own career prospects.” 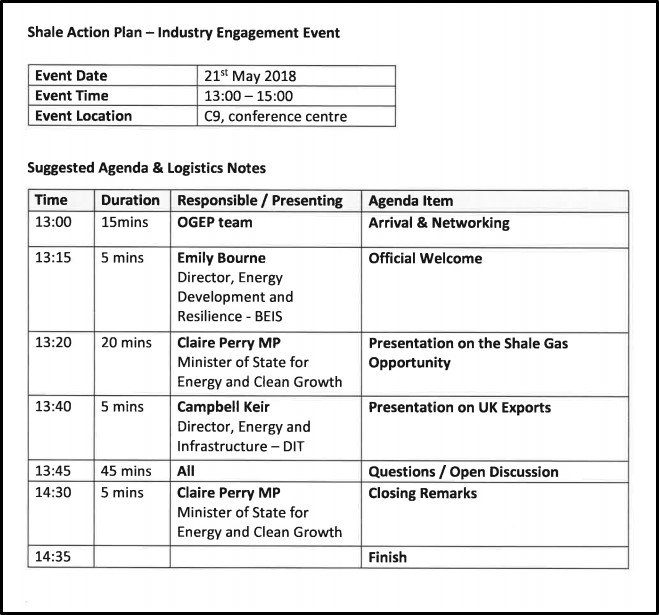 Agenda from the meeting

BEIS said withholding some of the information from the meeting notes was in the public interest.

It said it had used exemptions to the Freedom of Information Act on disclosure of material relating to the formulation of government policy.

In its response to Mr Bales, BEIS said:

“There is a public interest in ensuring that government has a safe space to develop ideas, debate live issues, and reach decisions away from external interference and distraction, as well as ensuring that the UK can obtain the best possible outcome for our policy regarding Shale Gas extraction.

“We judge that disclosing this information would inhibit the frankness of future discussions, inhibit policy formulation and development, which would not be in the public interest. In our view, taking account of these factors, there is a strong public interest in withholding information.”

BEIS also said it had used an exemption under the act on providing confidential information. On these details, BEIS said no public interest test was required. 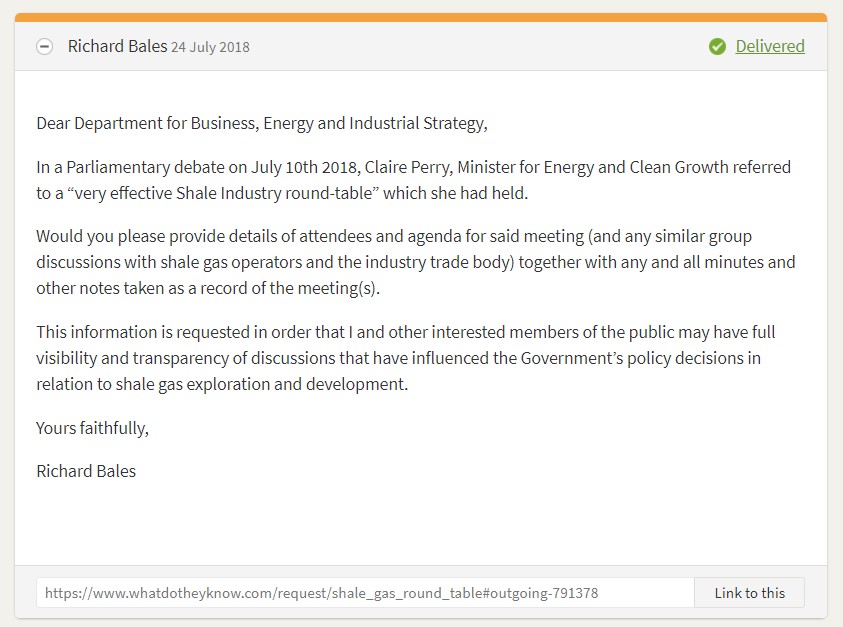 “The response is clumsy, brutal and insensitive and makes no attempt to disguise the gulf which now exists between the Government and its public. It implies that transparency of decision-making is primarily to be discouraged and that the public are to be excluded from the decision-making process for their own good. It cannot be accepted.”

He has asked BEIS to carry out an internal review of its decision. He said it was “inconceivable” that a minister would hold a scheduled meeting with a formal agenda and attended by senior officials without a record being kept of attendees.

“Security alone should dictate that attendees would sign-in, with prior notification of expected attendance, to ensure that participation is limited to those with a valid invitation or reason to be there. I would suggest that insufficient attempts have been made to identify and disclose the requested information.”

He also challenged BEIS’s use of the exemptions.

“The argument used is that the public’s interest in information being disclosed for reasons of transparency and understanding of Government policy is in itself an impediment to the decision making process.

“The implication is therefore that no visibility of the decision-making process is to be allowed and that the public interest in disclosure of relevant Government process is to be continually denied.”

Mr Bales said this was not intention of the exemption in the Act. He also described the exemption on confidential information as “a catch-all response that is only justifiable if all such notes relate to input from third parties to whom disclosure would represent a breach of confidence”.

“One wonders what information might have been shared at the Round Table that was not disclosed by the WMS [Written Ministerial Statement] or in the later testimony to the Committee, at which Claire Perry made several references to Government’s intention to ‘work to eliminate distrust’.

DrillOrDrop asked BEIS to respond to these arguments. A spokesperson said:

“As the review is ongoing we will not be commenting on this at this time. More information will be available once the review is complete.”

Last month, the government advertised for a shale gas commissioner to “facilitate communication” with residents in fracking areas.

The role aimed to:

There is a growing list of official documents on UK shale gas development that have been redacted, unpublished or delayed.

In February 2018, it emerged that another report, which was not published, had scaled back estimates on the number of UK unconventional oil and gas sites in the 2020s. (DrillOrDrop report)

In July 2015, the government finally released a full version of the previously redacted report on the impacts of fracking in rural areas after an instruction from the Information Commissioner.