Fracking at Cuadrilla’s shale gas site near Blackpool, which began last week, has already been linked to 12 minor earth tremors.

They were too small to feel at the surface. Some were described as micro-seismic events.

But two, with magnitudes of 0.3 and 0.4, reached the amber level on the traffic light system, the regulation for monitoring earthquakes induced by fracking.

Another of this week’s tremors, at 0.48, was almost at the red level, where operations are supposed to pause.

The activity has prompted an energetic debate about the traffic light system: where did it come from, is it working in the way people expected and what does it mean for Cuadrilla’s Preston New Road site.

Where did the red light come from?

In spring 2011, there were more than 50 earth tremors, near Preese Hall, another shale gas well in the Fylde where Cuadrilla was fracking.

The tremors measured between -2 and 2.3 on the Richter or local magnitude (ML) scale. The largest was felt by people across the area and Cuadrilla suspended operations at Preese Hall.

A year later, in April 2012, a government-commissioned report linked the tremors to Cuadrilla’s fracks. It recommended:

The report proposed, at least for the next few operations, that the liquid used to frack the well should be flowed back immediately if seismic events with a magnitude of 0.5ML or above were detected – the equivalent of a red light.

This recommendation was developed by the government into the traffic light system, or TLS. It is now being used to regulate activity at Preston New Road, which is the first high volume hydraulic fracture in the UK since the Preese Hall earthquakes.  Traffic Light System leaflet

Earthquakes are usually described by their magnitude or size, measured in the UK by the ML scale.

This is a logarithmic scale, where means that each whole number increase in magnitude represents a tenfold increase in the maximum ground displacement.

The Oil and Gas Authority says it uses ML for the traffic light system because it can be computed very quickly. It is a single figure that does not vary depending on depth, distance or surface geology.

But the intensity of a tremor – the effect as it is experienced at the surface – is also important. A large magnitude earthquake at a great depth may do less damage at the surface than a smaller, shallower tremor.

Intensity, referred to as ground motion, depends on factors such as local geology and the frequency of vibration. One way to measure ground motion is by peak particle velocity or PPV. This is recorded at a particular location using a vibration monitoring array.

Cuadrilla showed the PPV effects of some Blackpool activities on its seismic e-portal. It said a passing Blackpool tram generates a PPV of 0.4mm/s. Cuadrilla calculated that this was equivalent to the effect of an earthquake of magnitude 1.8 occurring at a depth of 2.5km.

British Standards set a PPV of 15 millimetres per second as a safe level. Above this, buildings may begin to experience cosmetic damage.

Earthquake magnitude and ground motion are both used to regulate seismicity induced by fracking. Both are referred to in Cuadrilla’s hydraulic fracture plan for Preston New Road.

The first time a Preston New Road earth tremor reached 0.3ML, there were expectations that Cuadrilla would register this as an amber event and take action required under the TLS.

But the company said this tremor, recorded on 19 October 2018, did not count as amber because fracking was not underway at the time.

According to the hydraulic fracture plan and the TLS, the three stages apply only when liquid is being pumped, during fracking operations.

A flow chart in Cuadrilla’s hydraulic fracture plan (p23) shows how the company expects the TLS to work in practice. 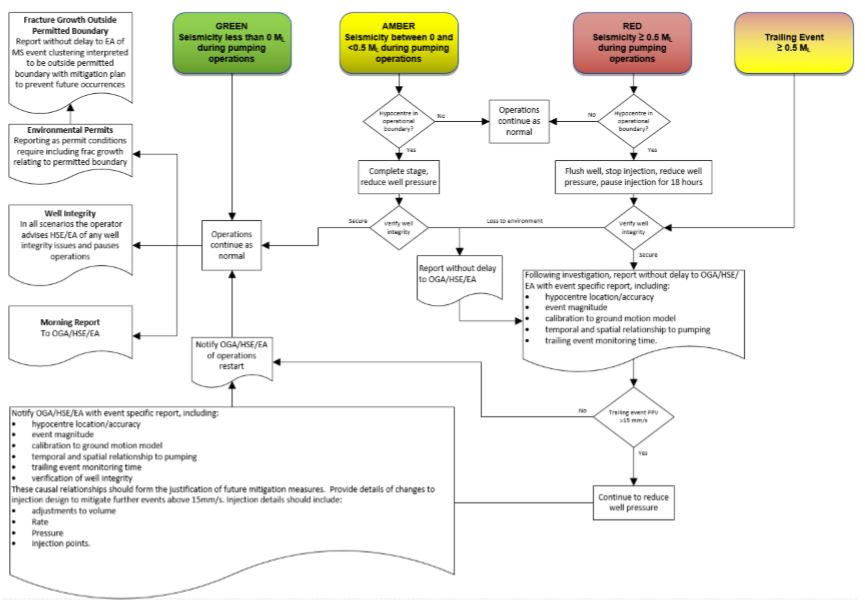 A seismic event of magnitude less than 0.0 occurs during pumping.

A seismic event between 0 and 0.5 occurs during pumping within the operational boundary (a specified geographical area).

So far, Cuadrilla has experienced two amber events, on 23 October and 25 October 2018.

A seismic event of 0.5 or greater occurs within the operational boundary while pumping.

The BGS recorded a 0.5ML tremor on 24 October 2018. But Cuadrilla did not accept this as a red event because it said the BGS had rounded up the magnitude from 0.48 and fracking was not taking place at the time. Since then, the BGS has confirmed it as 0.5ML.

What is a trailing event?

A trailing event is seismic activity which happens when pumping is not taking place.

The tremor on 24 October 2018 would, if Cuadrilla had measured it at 0.5ML, have brought the TLS into play.

According to the hydraulic fracturing plan, Cuadrilla would have to take the following actions if there is a trailing event of 0.5 or higher:

The original summary of the TLS, published by DECC in 2014, suggested that a red event really did mean Stop.

But a later version of the TLS information leaflet made it clear that a red event would lead to a pause rather than a stop.

So what would stop, rather than pause, fracking?

According to the hydraulic fracture plan, the key to whether fracking continues after a red seismic event is the ground motion, rather than the earthquake magnitude. Any PPV above 15 mm/s risks damage to buildings and could affect buried infrastructure, such as pipelines.

So a seismic event of 2.3 (as happened at Preese Hall) could pause, rather than stop, the fracking process if the surface ground motion was below the 15mm/s threshold and well integrity was intact.

In the hydraulic fracture plan, Cuadrilla has a worst case scenario where a 3.1ML earthquake was the maximum possible that would be induced by fracking at Preston New Road. Even this would only pause, not stop, fracking if the surface ground motion was below the 15mm/s threshold and well integrity was intact.

Seismic events of this magnitude might not cause any surface damage, but could affect the well, as happened at Preese Hall in 2011.

Will the red level change?

The shale industry has indicated previously that it regards the 0.5ML level as too low to trigger a red light. A red event, even with a pause, could cost at least a day’s delay. Cuadrilla told the High Court earlier this month that every day’s delay cost it £94,000.

The OGA said in its document on the TLS that the 0.5ML limit on red events “may be adjusted upward if actual experience shows this can be done without compromising the effectiveness of the controls.”

The energy minister, Claire Perry, told MP Kevin Hollinrake in the summer, that the earthquake rules could be relaxed.

In a letter, she said:

“The TLS [traffic light system] is set at an explicitly cautious level but, as we gain experience in applying these measures, the trigger levels can be adjusted upwards without compromising the effectiveness of the controls.”

But in response to a parliamentary question by Louise Haigh earlier this month, she appeared to backtrack:

“I can absolutely confirm that I am not considering weakening the monitoring controls on seismicity”.

Shale gas extraction in the UK: a review of hydraulic fracturing Royal Society and Royal Academy of Engineering June 2012