Crispin Blunt, who represents the area around the Horse Hill wellsite, said today:

“There now needs to be another detailed independent examination of the evidence”.

He also said he would call for a moratorium on oil exploration and extraction in Surrey if the strength and frequency of tremors increased and if a local oil company failed to provide relevant information.

Mr Blunt (left) was speaking after people across the county and beyond were woken up by a 3.1ML (local magnitude) earthquake early on 27 February 2019.

This was the most powerful of the 24 seismic events affecting the Newdigate area since 1 April 2018. 11 of the tremors have been felt by local people.

The swarm continued through last summer until 19 October 2018  . It resumed on 14 February 2019, with a 2.4ML event, followed by a 2ML on 19 February, both of which were also felt. DrillOrDrop page on details of the Surrey swarm

The MP’s comments follow denials by oil companies that their operations cause the quakes and contradictory studies by geologists.

In November 2018, the report of a workshop organised by the Oil and Gas Authority (OGA) concluded that there were no links to oil and gas sites.

In February 2019, one of the participants in that workshop and two colleagues from Edinburgh University, concluded that oil exploration at Horse Hill could have triggered the earthquakes. They called on the site operator to provide detailed records of operations at the site. They also predicted:

“future oil exploration and production close to critically-stressed faults in the Weald is likely to result in similar earthquake events”.

This week, UKOG, the major investor at Horse Hill, gave details of a paper going through the peer-review process by another group of geologists.

This proposed an alternative screening system to assess whether earthquakes were natural or induced by human activity. The authors, who included two participants in the OGA workshop, concluded that events in the Surrey swarm up to August 2018 were natural and not caused by operations at Horse Hill or another local site at Brockham.

Today Mr Blunt called on his website for an independent investigation. He said it was needed to establish:

“I have also written to the Secretary of State for Environment, Food and Rural Affairs [Michael Gove] reminding him that evidence connecting recent local seismic activity to oil exploration activities at Horse Hill and Brockham remains inconclusive and urging his Department to investigate categorically whether or not there is a causal connection.”

He said he wasn’t calling for an immediate moratorium because the strength of the tremors was “not sufficient” and there was no conclusive link to activities at Horse Hill and Brockham. But he added:

“I would plainly urgently review this position if I was made aware of authoritative advice that earthquakes at this strength should be a cause of serious concern.”

“I would be in favour of calling for an immediate cessation of oil exploration and extraction activities at Horse Hill and Brockham, if i) local earth tremors increase in strength and frequency before an independent examination reaches its conclusions, and ii) UKOG fails to produce information relevant to the examination.”

“we do need reassurance about the medium and long term implications and we must enable independent experts to examine all data they deem necessary and we must expect UKOG to provided what they have and indeed assist if more is needed to make conclusions more reliable.”

How to tell whether earthquakes are natural

The OGA workshop assessed the cause of the Surrey earthquakes using the Davis and Frohlich Criteria, developed in the United States. This system asks a series of questions, which if answered yes, suggest the earthquakes were likely to be induced, rather than natural.

An alternative system was proposed in an unpublished paper submitted to the journal, Seismological Research Letters, but made available this week. Link to paper

Rather than yes/no answers, they scored the questions based on the relative importance of the issue and the certainty of the evidence.

The paper used as case studies the Surrey oil sites of Brockham and Horse Hill, based on 18 earthquakes between April and August 2018. The academics said they used information provided by UKOG about Horse Hill and published data about Brockham.

They calculated the Induced Assessment Ratio for Brockham was -33% and for Horse Hill (described as HH-1) -79%. The Evidence Strength Ratio was 92% for both sites.

“The high ESR value indicates that this judgement is robust, and that most of the desired evidence is available.” 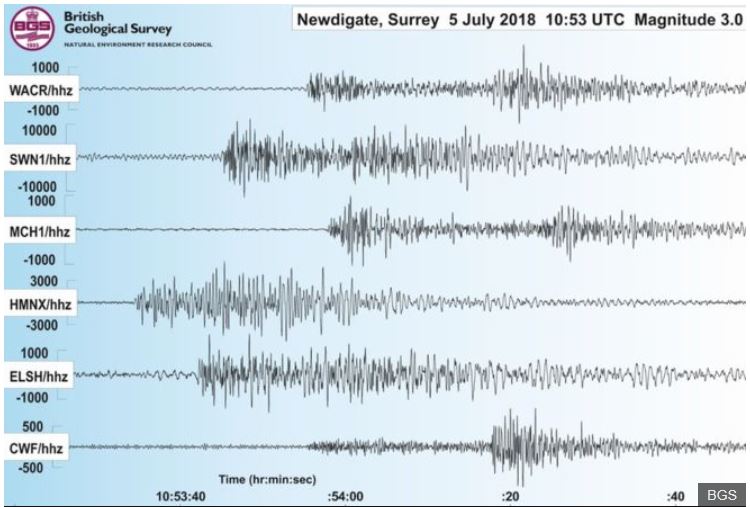 UKOG said it had “fully cooperated” with the Verdon research and “provided the data necessary for analysis”.

“As a responsible and ethical organisation with employees living in the area, UKOG will continue to work with and provide necessary scientific data to such experts”.

But the conclusion of the Verdon paper has not settled the controversy about the cause of the Surrey earthquakes.

The judgements on scoring remain open to interpretation, which was a criticism of the Davis and Frohlich system, and the IAR still benefits from full information release.

The paper appears not to have considered the 11 earthquakes or wellsite operations since August 2018. There remain questions over when site operations began at Horse Hill in spring 2018.

The paper gave a maximum negative score to both sites on distance from the epicentre, even though Horse Hill was about 2km away.

On the question of depth, the Verdon paper said the earthquake epicentres at 2km were “significantly below the production horizons at Brockham and Horse Hill. But the British Geological Survey’s online database records the depth of the first 13 earthquakes at 1km.

On previous seismicity, the paper scored -5 for both Brockham and Horse Hill because it said there had been an earthquake 15 miles (as the crow flies) away at Billingshurst in 2005. Other researchers have pointed to the absence of earthquakes in the Newdigate area in living memory.

“The report only refers to waste water reinjection and flow testing operations, but doesn’t give any attention to pressurised injections of acid-based fluids. Those are permitted at both sites, but because they are intended to be kept at below hydraulic fracture pressure, none of the regulators require any monitoring of the volumes, pressures or timings.

“The traffic light system [regulation on fracking-induced seismicity] doesn’t apply here either, meaning there is no protocol for evaluating potential links between injections and seismicity.

“We believe that anything that has the potential to change the downhole pressure, either to increase it or to decrease it, could induce seismicity. And if that is correct, then even activities such as an acid wash under a pressure slightly greater than formation pressure could be responsible for earthquakes. And even more so if the acid is applied at a greater pressure.

“There are also concerns about the quality of data. The report refers to monthly injection and production data publicly available for Brockham, but the monthly totals seem not granular enough for a meaningful analysis, and in any case, the numbers still haven’t been verified after inaccuracies had been pointed out.

“Even if Brockham is not the culprit, this highlights the fact that some of the analysis is based on inadequate and unreliable data collected by a regulatory regime based on industry self-monitoring.”

“Introducing this added level of complexity will do nothing to help public trust when even the simpler Frohlich method of determining whether the earthquakes were man made could be so easily distorted by the simple trick of ignoring the existence for Horse Hill well, 3kms from the epicentres and drilled through the fault.

“In the letter to the Secretary of State which preceded the OGA workshop, the academics concluded ‘In the interest of safety, best practice also requires that a respect distance is made mandatory when drilling near faults.’

“In contrast the principle author of this new paper, Dr. James Verdon, also known as @TheFracDoctor, wrote a paper for the OGA arguing against having a mandatory respect distance for drilling near faults, ironically the very thing that would have helped Surrey residents sleep well in their beds at night.

“This paper ignores the Edinburgh investigation that looked into Horse Hill as a possible cause and which uncovered the existence of continuous pressure increases during the 2016 well testing, which were resolved by periodic venting until the well was shut in when well testing permissions ran out. The operator returned to work on the well site in March 2018, their work on the plinth and well cellar construction coincided with the start of the Swarm and pointed to the trigger being the sudden release of long built up gas pressure.

“So it’s disingenuous for the authors to be basing their tests on the start of the main flow test in July 2018, as they do here. Post dating the start of operations makes either method of assessment invalid.”