The Mail On Sunday reports she sent “an explosive” resignation letter to the business secretary, Greg Clark, complaining that “government paralysis” over a review of regulations of fracking-induced earthquakes was “effectively putting an end to fracking in the UK”.

She accuses ministers of killing off the shale gas industry by caving in to environmentalists.

Ms Engel, a former Labour MP, opposed fracking when Ineos first announced it was planning to explore for shale gas in her North East Derbyshire constituency. 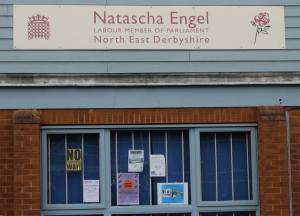 She later lost her parliamentary seat and was commissioned by Ineos to write a leaflet, as yet unpublished, about shale gas.

She was appointed as the UK’s first shale gas commissioner on 1 October 2018 and was due to have a half-yearly review last month.

DrillOrDrop asked Ms Engel last night why she was leaving and for a copy of her resignation letter. She has not responded.

According to the Mall on Sunday, she told Mr Clark she was stepping down because

“a perfectly viable industry is being wasted because of a Government policy driven by environmental lobbying rather than science, evidence and a desire to see UK industry flourish.”

The paper quoted her as saying that the government was:

“listening to a small but loud environmental movement that opposes in principle all extraction of fossil fuels. The campaign against fracking has been highly successful in raising the profile – and filling the coffers – of some campaign groups, but they do not represent local residents nor the wider population.”

Ms Engel’s main reason for quitting was, the paper said, the government’s refusal to review the 0.5ML threshold for tremors caused by fracking.

The limit has been strongly criticised by Cuadrilla and Ineos. They said it could make a UK shale gas industry commercially unviable.

The government said any review of the threshold was the responsibility of the Oil and Gas Authority, the industry regulator. The OGA has said it is analysing data from fracking at Preston New Road but was not reviewing the regulations, known as the traffic light system (link).

According to the Mall on Sunday, Ms Engel said in her resignation letter:

“A 0.5 tremor is much weaker than the rumble you might feel when walking above a Tube train. Yet if a frack unleashes a tremor rated 0.5 operators have to stop what they’re doing for 18 hours… this is making fracking impossible.

“We have the evidence, but the only thing that’s stopping a review is the Government. Yet Mr Clark is refusing to budge and time is running out. If the Government continues to listen to campaign groups rather than science, then he is effectively putting an end to fracking in the UK

“Firms have invested hundreds of millions of pounds. They did all this on the basis that Government policy would be rational, that it would be scientific. But it’s not.”

During her time as shale gas commissioner, Ms Engel has never made a secret of her support for fracking and repeatedly said she was not impartial.

She wrote to newspapers to complain when they referred to tremors caused by fracking at Preston New Road as earthquakes. This was despite the use of “earthquakes” by the British Geological Survey (BGS) on its website for all seismic activity measured in the British Isles.

She told an industry seminar before Easter that renewables could not replace gas and locally-produced gas would have a lower carbon footprint that imported LNG.

The Mail on Sunday quoted her as saying: by denying ourselves shale gas, “we are also depriving the Treasury of huge tax revenues, which could be spent on schools or the NHS”.

Ms Engel has also been very critical of environmental and climate change campaigners who oppose shale gas. In the Mail on Sunday, she refers to the Swedish 16-year-old Greta Thunberg:

“I cannot understand why politicians would rather listen to a teenager who tells children not go to school because they will soon be dead rather than looking at ways of reducing our emissions by taking gas out of the ground here.

“We should be giving our children a positive and hopeful message: telling them to go to school, go to university, to become scientists and innovators who can find the answers to climate change.”

“[I] was really excited to be part of a vision for the future, that would help restore Britain’s reputation as a creative, forward-looking country which took both emissions targets and prosperity seriously.

“But for reasons I cannot fathom, the Government’s approach is not leadership, but paralysis.”

She said a small minority of residents were opposed to fracking. But they were heavily outnumbered, she said, by people who want what she described as the benefits that fracking could bring.

The government’s latest survey of public opinion on fracking puts support at a record low of 13% and opposition at a near high of 35%.

Ms Engel also told the Mail on Sunday that geologists and industry had “fiercely objected” to the 0.5ML threshold when it was set in 2012.

But correspondence reported by DrillOrDrop shows that Cuadrilla worked with officials on the threshold. Last year, the energy minister, Claire Perry, responded to Cuadrilla’s criticism of the traffic light system, saying “at no point did you communicate that it would not be possible to proceed without a change in regulations”.

What has Ms Engel been doing?

The shale gas commissioner was appointed to be “a contact point with residents”.

According to a response to an FOI request to the Department for Business, Energy and Industrial Strategy (BEIS), the commissioner would

“listen to their concerns, refer them to relevant and factual research and help improve communication with regulators and industry.”

DrillOrDrop has been seeking an interview with Ms Engel about her role since 11 October 2018.

We have made nine separate requests and provided almost 40 possible dates for an interview. But Ms Engel has never responded, despite telling us informally that she wanted to do an interview.

We know from a response to an FOI request to BEIS, that she was one of 18 applicants for the post, four of whom were interviewed and two deemed suitable.

She was appointed for a two-year-term and paid at rate of £500 per day for a total of 96 days per year. This was to be open to review.

There were no restrictions on other posts she could undertake, BEIS said, “if the post-holder has time to do the role effectively and is not conflicted.”

She was “not required to have day to day supervision”. Her performance would be assessed half yearly by a senior civil servant at Beis, on behalf of the energy minister.

DrillOrDrop asked Beis for Ms Engel’s diary for the first six months of her appointment. Beis provided a list of events for the period 1 October to 28 February.

Her first month in office coincided with the start of fracking and earth tremors at Preston New Road. Our analysis of her diary in October 2018 shows:

There was a flurry of events at the end of October. This coincided with a series of earth tremors at Preston New Road measuring above the 0.5ML limit, including a 1.1ML event, which was felt by people near the site.

The diary records that on 29 October, Ms Engel had a meeting with the minister and industry on BBC coverage, as well as meetings with regulators, the Royal Society and other academics. The following day, she had meetings with Beis, regulators, industry and British Geological Survey. A few days later, there were meetings with the BBC, BGS, Beis and the Environment Agency.

Look out for more details of our analysis of Ms Engel’s diary.

Another FOI request asked Beis a series of questions about how much time Ms Engel had spent meeting communities, the industry, regulators ad government. The request was made on 3 February and should have been answered by law on 4 March. Beis extended the deadline, as it is allowed, to 1 April but at the time of writing has still not responded.

Reaction to the resignation

“strike the right balance in ensuring the industry can develop, while ensuring any operations are carried out safely and responsibly.”

“This is the first intelligent decision Engel has made. She backed a losing side and lost her seat in an election and now she has realised she is flogging a dead horse and walked away, leaving a resignation interview insulting everyone from local communities and the government to 16 year-old environmental activist, Greta Thunberg.”

“Less than seven months into the job Engel has thrown in the towel, in the same week that climate change protests take a pause and Barclays disposes of its onshore gas assets and licences.

“The ex-Labour MP has recognised that the UK fracking industry is dead. Wanna-be fracking companies should take heed and hand back their licences to frack to this off course, pro-fracking government. The UK, and the world, needs fewer fossil fuels – not more.”

A spokesperson for the industry organisation, UK Oil & Gas, said

“We are discomfited by the reports of Shale commissioner Natascha Engel’s resignation, and we thank her for the work she has done. The need for such a role is as important today as it was when first announced last October.

“A Department for Business, Energy and Industrial Strategy report just last week concluded that the processing and transport of natural gas via tankers into the UK generates double the greenhouse gas emissions compared with a domestic supply.

“With our import dependency heading towards 75% the need for domestic shale gas has never been so important for our environment or our economy.”

A spokesperson for the industry support group, Lancashire For Shale, said:

“The Shale Commissioner’s departure from the role is a damning indictment of government dithering.

“It has spent years convincing businesses and communities to ‘get ready for shale’. But now that people have enthusiastically embraced it, Ministers appear to have gone soft on the idea.

“Instead of listening to the science and expert opinion, politicians appear to be taking their steer from a vocal minority, aided and abetted by well-funded international campaign groups and their slick PR machines.

“Meanwhile, imports of Liquefied Natural Gas look set to increase, including in ships from Russia – up twenty-fold last year alone. Those deliveries are higher in emissions, sustain very few jobs in the UK and contribute nothing in the way of taxes, unlike UK shale gas which has the potential to boost our energy security, cut emissions and create economic prosperity – benefits that we may not realise if the overly cautious rules on mini earth tremors are not looked at again soon.”