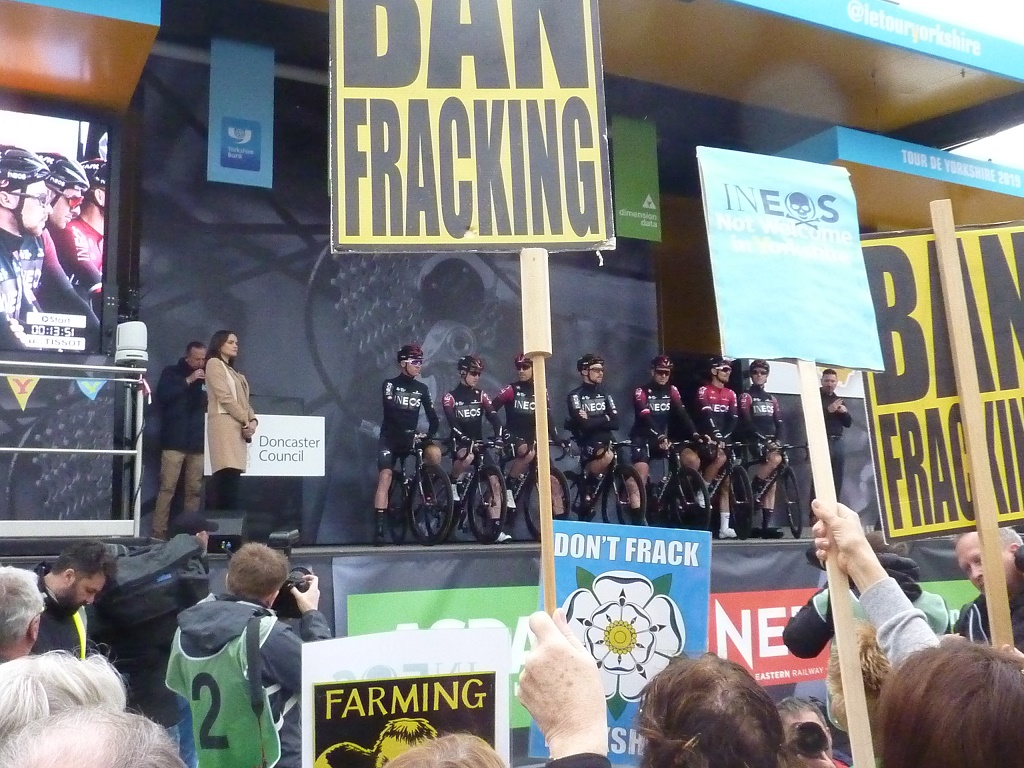 Team Ineos introduced before the start of the Tour de Yorkshire in Doncaster, 2 May 2019. Photo: DrillOrDrop

Reports earlier this month (The Times, Sky News) suggested that Petroineos, part-owned by Jim Ratcliffe’s Ineos Group, was seeking an emergency government loan that could be as much as £500m.

But an open letter today signed by groups including Talk Fracking, Greenpeace UK, Frack Free United, Food and Water Action Europe and the fashion designer, Dame Vivienne Westwood, asked ministers not to grant any loans to the company.

Petroineos, a joint venture with the Chinese state oil firm, PetroChina, runs refineries at Grangemouth in Falkirk and Lavera, near Marseille in France.

Ineos Upstream, another part of the Ineos group, holds exploration licences across northern England. It has planning permission to drill and test for shale gas at sites in Derbyshire and south Yorkshire.

“The Prime Minister of the UK and the First Minister of Scotland must prove true climate leadership by not granting any government support to Jim Ratcliffe and Ineos.”

The letter said bail outs or government loans to companies like Petroineos could “not be tolerated” because they contributed “systematically” to climate change and increased plastic pollution:

“Every investment in or support for Ineos would directly fuel the climate and plastics crisis, locking in future instability at a time when investment should be prioritised towards creating secure and sustainable industry.”

The letter described Ineos as the “main driving force” behind the supply chain of fracked gas from the US used by Ineos to produce plastics in Europe.

“The Ineos Dragon Ships crossing the Atlantic emblazoned with the slogan ‘Shale Gas for Europe’ are leaving more than a toxic legacy in Europe — they are fuelling the proliferation of fracking in Pennsylvania, a state that was already struggling with the impacts of oil and gas industry pollution.”

“Any support packages for companies must set conditions to protect workers’ rights and high environmental standards, prevent public money from being diverted into the pockets of shareholders, and re-orientate the industry towards meeting the Paris climate agreement.”