There were cheers and shouts of thank you from the packed public gallery of Brighton Magistrates Court this afternoon (9/1/14) as the first group of anti-fracking campaigners arrested at the Balcombe protest last summer were found not guilty of all charges. Eleven protestors* had been charged with obstructing […] 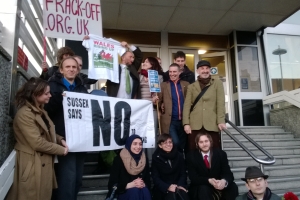 Balcombe protestors and their lawyers celebrate.

There were cheers in the public gallery as protestors in the Balcombe fracking trial were found not guilty of all charges.

An environmental campaigner arrested on the second day of the Balcombe protests accused the police of unreasonably and disproportionately aggressive and intimidatory action. Richard Millar, 30, from Brighton, told the city’s magistrates court this morning the police used pressure point tactics on him when he was arrested. Pictures […]

The police gave no warning when they made their first arrest at the Balcombe anti-fracking protest, the trial of eleven campaigners heard this afternoon (8/1/14). Countryside management student Samantha Duncan told Brighton Magistrates Court she was taking part in the protest on its second day, July 26th last […]

The trial got underway this morning (7/1/14) of the first group of campaigners arrested at anti-fracking protests in Balcombe last year. Three women and eight men are charged with obstructing the highway outside Cuadrilla’s oil exploration site on July 26th. They all deny the charge. The case is […]

The trial is due to begin today (7/1/14) of the first people arrested at the protests against Cuadrilla’s oil exploration operation in Balcombe. Eleven environmental campaigners were arrested on July 26th 2013, the second day of the blockade of Cuadrilla’s site at Lower Stumble. They are all charged […]

The defence solicitor in a court case arising from the Balcombe anti-fracking demonstrations said today the law should be applied consistently to all the protestors who were arrested. Shahida Begum was speaking during the trial of Nick Ward, an environmental campaigner from Cambridge, who was arrested at Cuadrilla’s […]