Initial assessments of damage caused by the UK’s largest fracking-induced earth tremor were made by staff from the Cuadrilla’s headquarters, not professional surveyors or insurance experts.

The shale gas company, INEOS, has been accused of bullying landowners to allow access for geological surveys. 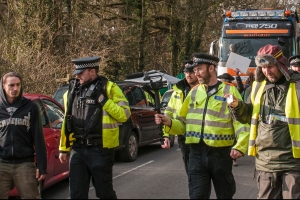 The policing of protests at the Horse Hill oil site near Gatwick came under scrutiny at the trial of nine anti-fracking campaigners today.

Fire has destroyed the home of an anti-fracking campaigner who is being prosecuted by Fylde Borough Council for displaying posters opposing shale gas developments.

Two environmental campaigners allege they were assaulted during an anti-fracking protest outside the exploratory oil site at Horse Hill in Surrey last year.

13/2/14 A climate change campaigner locked himself to the top of a water tanker leaving Cuadrilla’s oil exploration site at Balcombe to persuade the media that the anti-fracking protests were not petering out. 66-year old Robert Basto, who has a PhD in physics, told Brighton Magistrates Court that […]

The trial of a teenager charged following a protest outside Cuadrilla’s exploration site at Balcombe was unable to go ahead this morning (November 6th 2013) because the wrong sort of magistrates were in court. Only one of the three magistrates on the bench at Brighton was permitted to […]