Support for fracking in the UK has risen again, according to the latest findings from a quarterly government survey. Opposition remained unchanged and is still 14 percentage points ahead of support. The results published this morning put support at 18%, up two points on the previous survey. This is […] 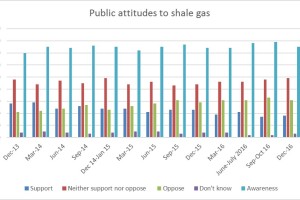 The latest findings from an ongoing government survey show the highest level of opposition to shale gas exploitation so far.