Support for fracking in the UK has risen again, according to the latest findings from a quarterly government survey. Opposition remained unchanged and is still 14 percentage points ahead of support.

The results published this morning put support at 18%, up two points on the previous survey. This is the second consecutive rise and is the highest level for support since this time a year ago.

According to the survey, support for shale gas still remains below support for nuclear energy (38%) and renewables (85%, a record high).

Opposition to fracking remained on 32% after a four point drop between the 2017 autumn and winter surveys. Opposition remains higher than a year ago.

The gap between support and opposition is narrowing and now stands on 14%, down from a record 23% in atumun 2017.

Participants who neither supported nor oppose fell to 47%, the lowest level since summer 2016. 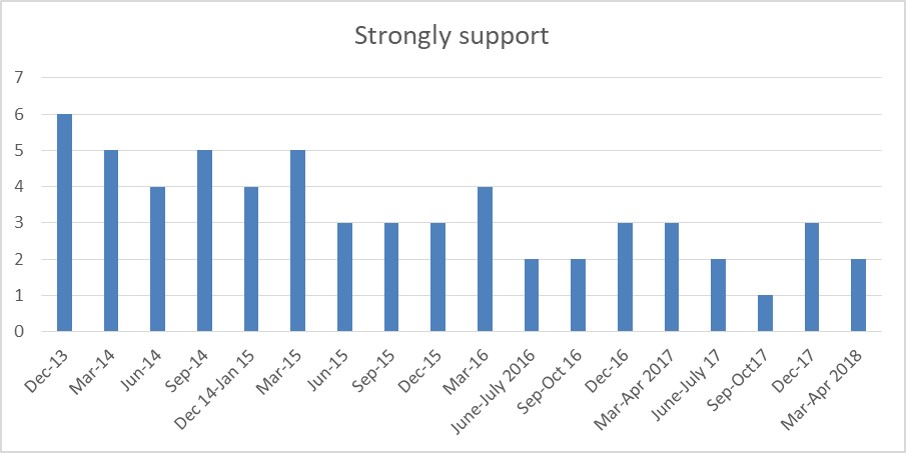 Despite the rise in general support, strong support for fracking was down one percentage point to 2%. This appears to be part of a general trend from the record high of 6% in September 2013.

The proportion of people who strongly oppose fracking rose by one per percentage point to 13%. This is just short of record levels seen at this time two years ago and in autumn 2017. 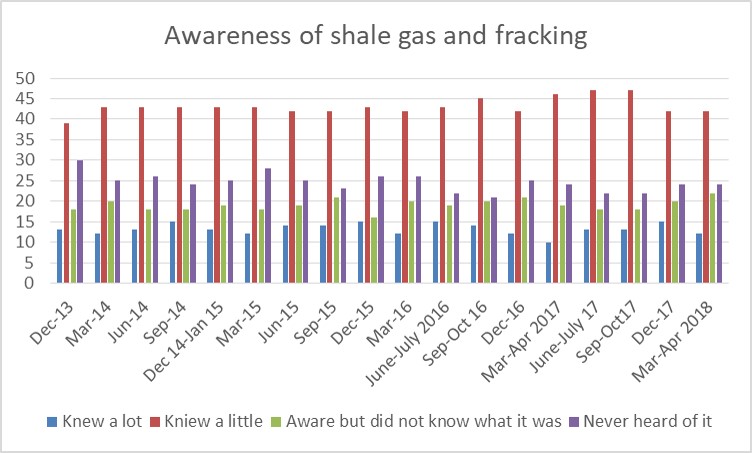 The cold spring and news headlines about energy imports may have influenced the reasons for supporting fracking.

The proportion who said they supported shale gas rose because it would reduce dependence on imports rose to 36% in this survey, up from 25% three months earlier.

Other leading reasons for support were “need to use all available energy sources” and “reducing dependence on other fossil fuels”. Both these reasons saw small falls.

Concerns about loss or destruction of the environment remained the leading reasons for opposing fracking, though it fell from 62% in the previous survey to 57% in this one. Other leading reasons to oppose also rose in this survey:

“The long-term trend is obvious – this industry continuously fails to win support in spite of efforts to alternately buy local support and to threaten opposition with draconian legal injunctions.

“The data suggests that the small increase in support, from recent record lows, seems to be attributable to the fake news during the cold snap about UK energy dependence on Russia. The reason for support “Reduces dependence on other countries for UK’s energy supply” leapt from 25% to 36% of those polled this time around, when in fact UK imports less than 1% of its gas from Russian sources.

“Meanwhile, support for renewable energy continues to increase, with a record 85% of those polled expressing support, and with strong support surging from 30% to 37%.

“The direction of travel in public opinion is clear. We now need our politicians to recognise this and take actions accordingly.”

“Unfortunately the misinformation and ignorance about our gas supplies from Russia are likely to create a knee-jerk response. The fact that there is no real change over the past year goes to show fracking is not the popular way to secure our energy supplies.”

The Wave 25 survey for the Department of Business, Energy and Industrial Strategy carried out 2,102 face-to-face interviews in homes among a representative sample of UK households. The data was collected 28 March and 6 April 2018 using the Kantar TNS Omnibus, a random location quota sampling method. The questionnaire was designed by BEIS and Kantar Public (formerly TNS BMRB) drawing on a number of questions from previous surveys.