The future of an oil exploration site in West Sussex depends on the results of tests at the so-called “Gatwick Gusher” well about 20 miles away in Surrey, a company has said.

Friends of the Earth has warned that an injunction against anti-fracking protests at Cuadrilla’s Preston New Road shale gas site could prevent peaceful lawful opposition. 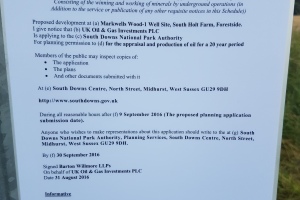 As expected, the company behind the so-called Gatwick Gusher oil well in Surrey, has confirmed it is preparing to submit a planning application for oil production in the South Downs National Park.

The report commissioned by the Government to assess the impact of onshore shale oil and gas development admits to multiple uncertainties and makes assumptions that opponents regularly challenge. Uncertainties The report (released 17/12/13) is part of the preparation for the government’s sale of onshore oil and gas licences […]