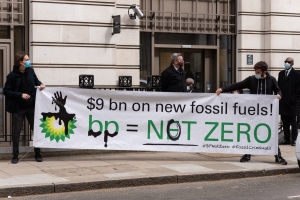 BP’s emission targets are “too little too late” for the climate, said anti-fracking campaigners protesting against the company in London this morning.

Does today’s climate report change the arguments on UK fracking?

UK anti-fracking campaigners claimed their case against shale gas was supported by today’s international report on the actions needed to limit global warming to 1.5 ºC.