Keep up to date with October 2022’s news with our digest of daily updated headlines about the business, regulation and campaigns around UK fracking, shale, and onshore oil and gas. Click here for headlines from previous months. Please let us know if we’ve missed something important  contact@DrillOrDrop.com Monday 31 October […]

COP26: Campaigners challenge Rishi Sunak on fossil fuels as he announces a “rewiring” of global finance

Climate activists were prevented from attending a speech by Rishi Sunak at the COP26 conference after questioning him on tax breaks for fossil fuels.

Councils dealing with planning applications for shale gas developments were invited today to bid for a share of £1.2m.

“Scandalous” shortage of money for research into public engagement on fracking, conference told

Two leading academics called this afternoon for independent funding for research into community engagement and public attitudes to shale gas. 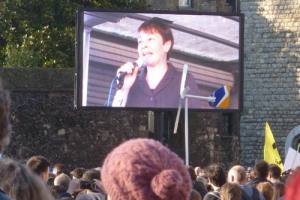 Lancashire anti-fracking campaigner, Tina Louise Rothery, told people on Saturday’s Time to Act climate march in London it was time to get mad and roar.

Does fracking bring down gas prices?

Who says it will? Michael Fallon, Minister for Energy and Business “The potential prize is huge: cheaper bills for everybody”  (31/7/13)  http://www.telegraph.co.uk/earth/energy/10213985/The-potential-prize-from-fracking-is-huge.html Prime Minister, David Cameron Fracking has “real potential to drive energy bills down”. (11/8/13)  http://www.telegraph.co.uk/news/politics/10236664/We-cannot-afford-to-miss-out-on-shale-gas.html Chancellor of the Exchequer, George Osborne “This is a major new energy source […]